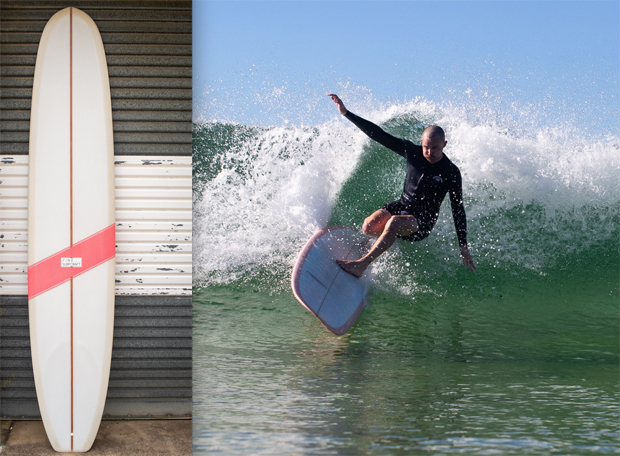 Shaper Andrew Warhurst and the Nose Sugar model – are you in the running?

Subscribe and WIN a Nose Sugar from Fine Surfcraft by Andrew Warhurst - our 88th giveaway board!

A new model among the 16 or so in the Fine Surfcraft range, “the Nose Sugar is our first noseride specific board, designed and built to maximize time on the tip.”

From his factory in Noosa, Andrew Warhurst is all about top-end production and attention to detail.

His label is the end result of 20-odd years of study and hard work in the industry, and while he doesn’t do a lot of comps these days, he has plenty of respect as one of Australia’s very best longboard stylists.

Andy grew up surfing along the Mornington Peninsula and at 16 headed to Torquay and signed on for a four-year surfboard building apprenticeship. He then went on to work at several different labels and for 10 years buried himself in mastering all aspects of traditional production from laminating resin tints, sanding and polishing to shaping.

In 2012 he relocated to Noosa to start Fine Surfcraft by Andrew Warhurst and for the past eight years he’s built all his boards old-school start to finish under the one roof, in between R&D at the points of course.

“The Nose Sugar features a subtle, flatter nose rocker into a slight kick in the tail which is accentuated by a scooped out tail concave on the deck to help create stay-time in the pocket. The bottom has a massive 7-foot concave into a slight roll and pinched rounded square tail. The fin box is set a couple inches further back than other models, again to maximise tip time. All in all a great recipe to get you on the nose and stay there.”

Complete with ’60s comp stripe, some *PLB subscriber is going to win it by next issue! *Australian residents only

NEW ISSUE > NO 103 was mailed to all international and Australian subscribers on June 26, will be on-sale nationally in Aus. Newsagents from July 3 - NZ stores from Mid July.