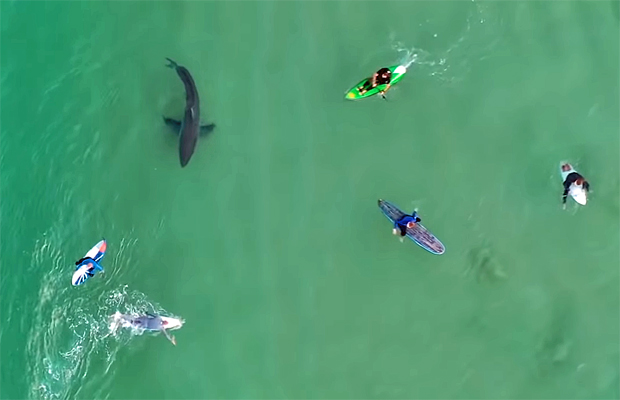 One frame from the video.

A 14-year-old drone pilot says he feared for the worst as he filmed a "huge" white pointer swim underneath surfers in South Africa's Western Cape region.

Zach Berman, an aspiring wildlife drone photographer, said he was monitoring shark activity with his father at Plettenberg Bay when the shark drifted into view.

"At first, I was struggling to comprehend what I was seeing," he said.

"It began to make its way towards the surfers and I feared for the worst; I really didn't know what was going to happen."

Other observers attempted to alert the surfers to the shark's presence but it was initially unseen as it drifted just beneath the surface.

While steadying his drone above the shark, Zach said he felt a sense of relief when the surfers — aided and alerted by a paddler on a jet ski — became aware of it and beat a hasty retreat towards shore.

"When everyone was safely on the beach, I showed them the footage and they just could not believe what they were seeing," he said.

"One guy in particular was in shock. The shark was directly in front of him yet he did not even know it was there." Zachary said to his surprise, "one or two" surfers returned to the water shortly after the incident, a situation he put down to the frequency in which white sharks were spotted at Plettenberg Bay.

"We get a lot of sharks along this beach as there is a seal colony not far away," Zach said.

"Given drones are really only a new addition to wildlife photography, this type of activity could have been happening for years."