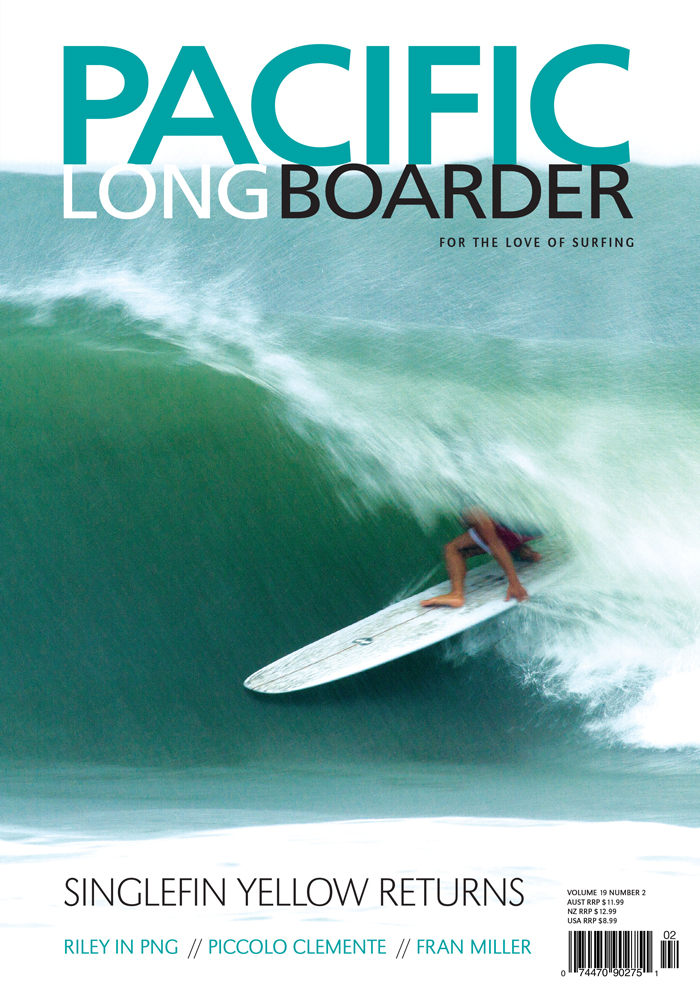 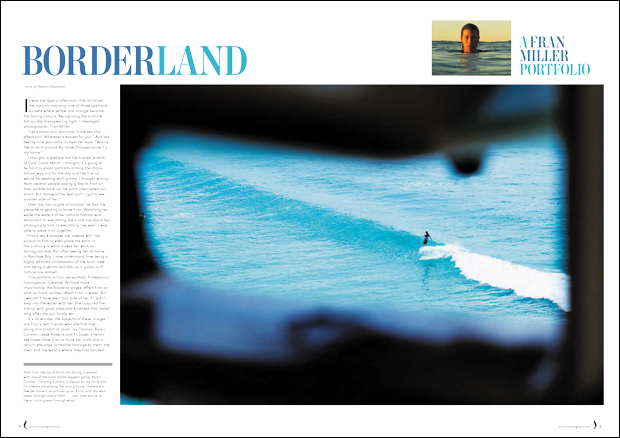 Fran Miller's from Tweed Heads and Snapper is her local, but if you think her photography reflects what we identify with that break, crowds, mayhem etc. you'd be very wrong. Mainly shooting from the water, Fran has developed a fine-art style distinctly hers. Internationally recognised already, she's been invited to show at the New York Surf Film Festival and we're wrapt to have a selection of her best in PLB. Contributing writer Aaron Chapman wrote the intro and got to take a shot or two of Fran herself. 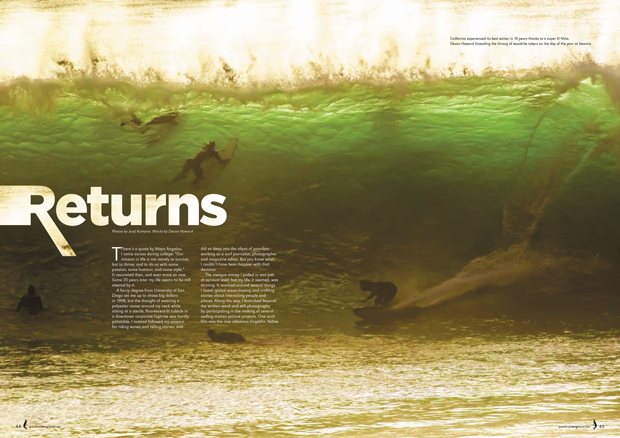 The demise of many print surf titles worldwide certainly has given us access to a wider range of quality photographers than ever, and as well as Fran's spread, we've got big-deal Japanese fashion and nature photographer Junji Kumano, a keen longboarder. On a recent trip through California with David Kinoshita he caught up with Devon Howard and Tyler Hatzikian for a reunion of sorts of three of the stars of the 2003 film Single Fin Yellow. Devon, a renowned writer, former editor of US Longboard magazine, and one of the world's best longboarders, sent the words. 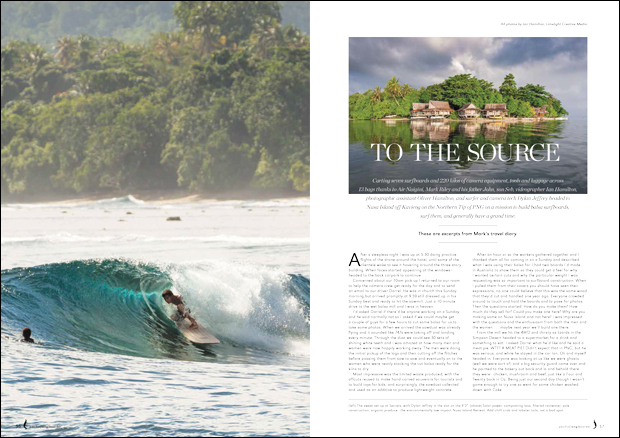 For the last five years Sydney balsa surfboard builder Mark Riley has been sourcing high quality balsa from PNG and so came up with an idea to mix business with pleasure by visiting the balsa farm and factory and then taking a crew to the Nusa Island Retreat on Kavieng. Mark also took 220kgs of equipment, a pile of balsa and plenty of good intentions. He built some boards while teaching some enthusiastic locals the process and then surfed those boards and others in the pristine local waters. Now this is the sort of foreign aid there should be more of.

No, not another hipster recommendation from your local barista, but veteran surf journo and organiser Andy McKinnon's profile of the current World Champ Piccolo Clemente, put together during a recent trip by Piccolo and his family to the Oz East Coast from their home in Peru. Andy gets to ask all the questions and we end up fully informed about Piccolo's unique life as a full-time pro in surf-crazy Peru.

THE SEA, THE GFC AND ME

When he gave away a legal career in California many years ago now and threw himself into the uncertainty of the so-called "surf industry", Tom Wegener still didn't contemplate anything as radical as the GFC. A craftsman on all sorts of boards, Tom, more than anyone, has been the driving force behind the worldwide rebirth of the Hawaiian alaia and finless surfing over the past decade. This is an excerpt from his upcoming book, Surfboard Artisans from the Love.

The GGs getting on a bit these days so it takes a while for the editor to correct the spelling, grammar and punctuation before we can have a chortle at his latest exploits. Age hasn’t reduced though his ability to light up your contest or function provided the appropriate respect and sinecure is paid.

In this internet age we won’t bore you with info you already know about so here we present fascinating and fabulous stories you won’t see anywhere else. Italian surf artists, ghost boards, surf bands, quirky contests and more.

Tamam Shud have a new album out and chief reviewer and massive fan Camo recaps their career, and has a chat to Lindsay Bjerre. Let your freak flags fly.