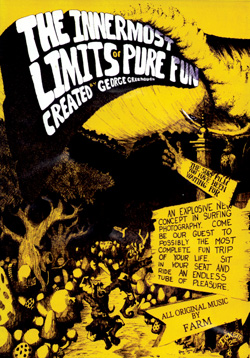 The Innermost Limits of Pure Fun

Filmed and Edited by George Greenough.

This release is essential watching because it is a cinematic masterwork of the highest magnitude. In it, George Greenough chronicles  ground zero of the shortboard revolution as it evolved in 1968.

This highly peronalized film is the prime instigator's perspective of the innovations that changed surfing forevermore as they cam down. Track  the inside out with George in groundbreaking point of view sequences that are utterly uique.

Hear the distinctive improvisational soundtrack which was scored on the spot by Dennis Dragon (before the Surf Punks), his brothers Doug and Daryl, (the captain before Tennille), and Denny Aaberg, (before Big Wednesday).