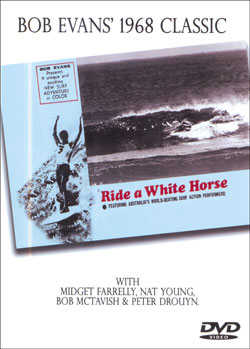 This 1968 release is a compendium of the changes in Australian surfing over the preceding decade.

It covers the arrival of the Malibu board and charts the rise of Midget Farrelly and Nat Young to international prominence.

With footage from most of Evan's previous films, it shows Midget surfing as a 13-year-old, as well as in the 1964 Manly World Titles six years later, along with Nat's performances in the Peru and San Diego World Championships.

Also early footage of Nipper Williams, Mick Dooley, Tank Henry and Dave Jackman, later footage of Bob McTavish and Peter Drouyn, along with plenty of big wave riding in Hawaii by both Australian and American surfers.