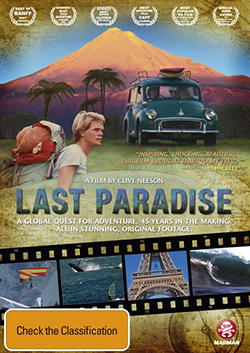 LAST PARADISE has been dubbed "the greatest story of adrenaline and innovation" - how a bunch of young adventurers met in the wilderness and pushed the limits of innovation to pioneer the modern concept of extreme sports and adventure travel.

For physicist/film maker Clive Neeson the film has literally been a lifetime in the making and that journey has revealed major issues about our future and how we will innovate the vital solutions for survival of our civilisation. But, its all in the story of fun, adventure and 45 years of jaw-dropping original footage.