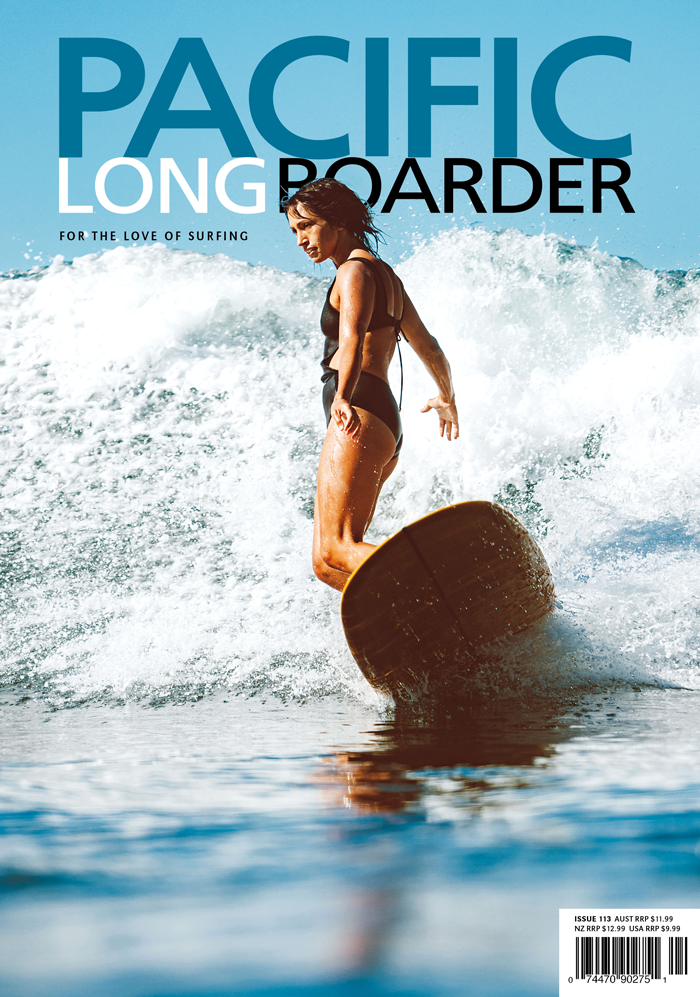 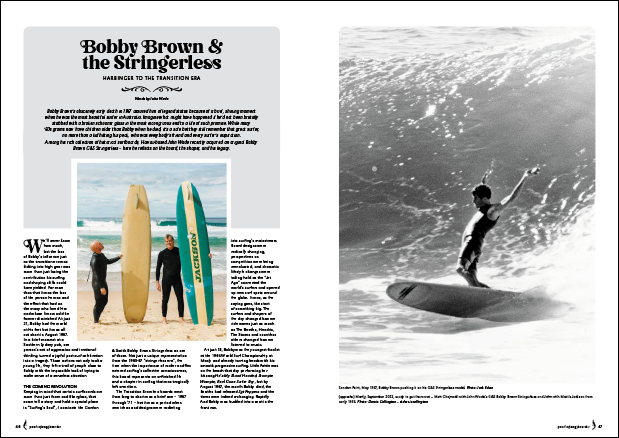 Those over a certain age will know exactly what this is about, but here John Wade, our regular weaver of interesting stories around important surfboards, revisits the short life of one of the best surfers of the early longboard years. John added one of these 1967 Gordon & Smith boards to his extensive collection recently, flew over to Australia from his home on the North Shore, interviewed all the right people and took a deep dive into the lasting legacy of the Bobby Brown Model. 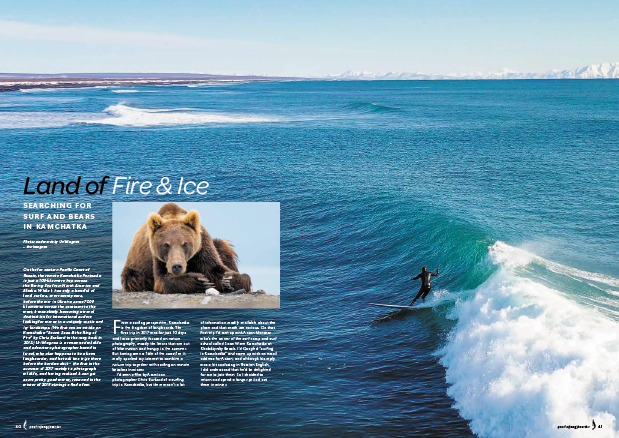 World-renowned Israeli nature and adventure photographer Uri Magnus takes us for a spin up the coast of the Kamchatka Peninsula over on the far, far, east of Russia. On his first trip there Uri noticed some promising waves and having also discovered a small but committed group of local surfers, took his board on his next trip. In the company of a few of the locals he set off exploring and found some decent waves, amazing scenery and some very big bears. 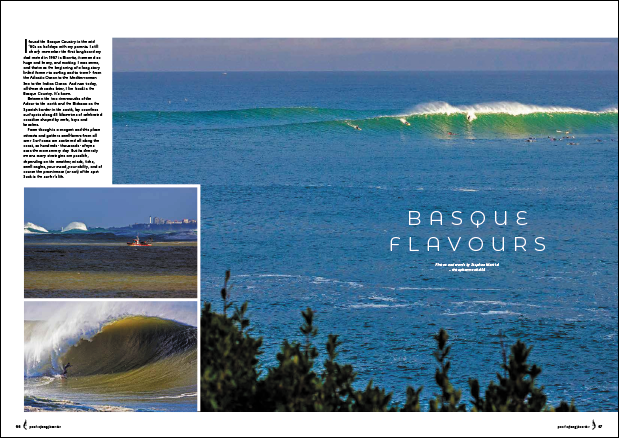 Local photographer Stephen Monteil has been wrapped up in the ocean lifestyle since he caught his first wave on his dad’s hired log in the ’60s and he brings a fresh look to this land of rich surf culture. Stephen’s shots are mostly pulled back scenics and line-ups while his words (in his second language btw) give us an insightful description of this celebrated 45 kilometres of coastline. 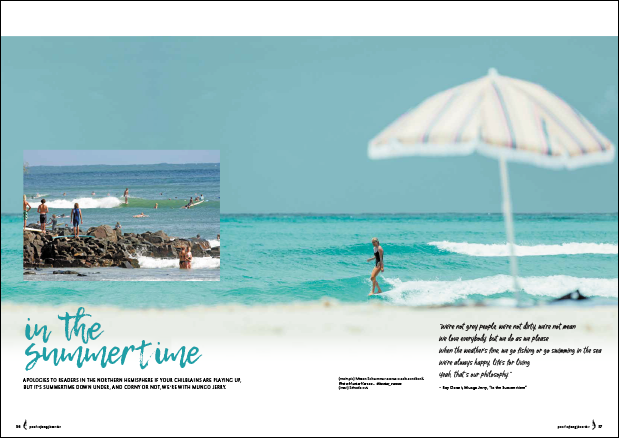 Yes it’s summer in Oz and we celebrate with 10 pages of evocative photos liberally sprinkled with lyrics from some of the ed’s favourite summer songs, all the way from Edddie Cochrane to Lana Del Ray. 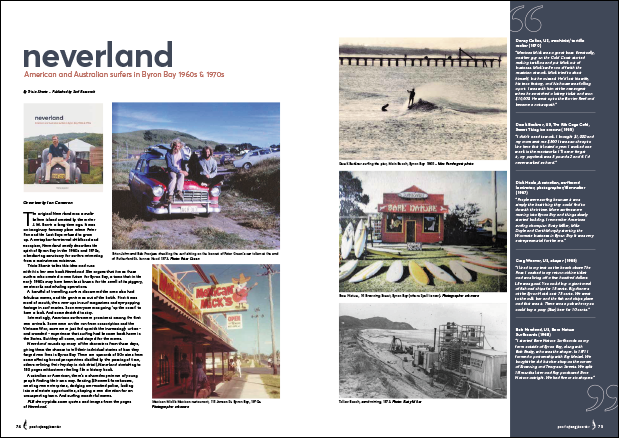 Today Byron Bay is the centre of the known universe but back in the 1960s and ’70s it was a very different place, however an influx of surfers then arguably began its transformation. American surfers looking for something different from the mainstream were particularly influential and it’s this aspect which is the focus of Trisha Shantz in her new book Neverland. Camo contributes an extensive review and features some really great historical photos which are a major feature of Trisha’s work. 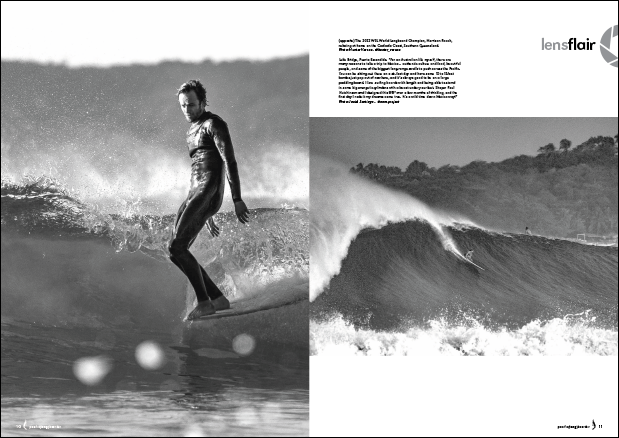 Big fab photos from all round the world, noserides, big waves, flying sharks - the lot!

8-year-old Hunter from Victoria on surfing, surf culture, his heroes and all things wonderful - almost unbelievable but totally true. Also, time capsule photo, board and Barz winners, Mal and Bob - legend photographers get together, The Physics of Noseriding, & balsa for boards. So much!

This issue’s short surfer profile is Mike Melega from the challenging and somewhat unlikely surf town of New Jersey.

The GG reluctantly engages in the festive spirit with his take on Santa, a few other Christmassy things, and most importantly, presents, with some helpful suggestions on how to avoid upsetting grumpy grandpa with your choice. 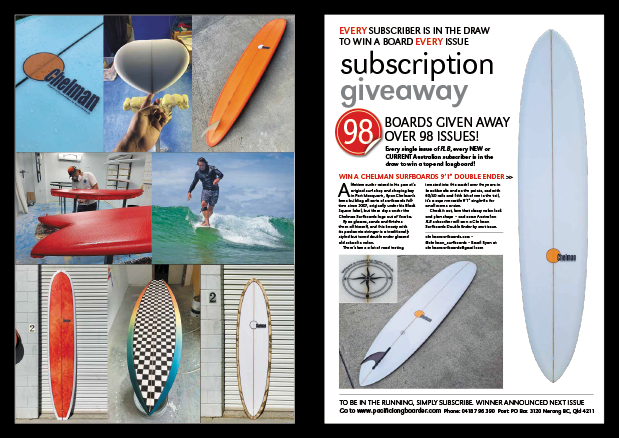 + THE 98TH BOARD GIVEAWAY