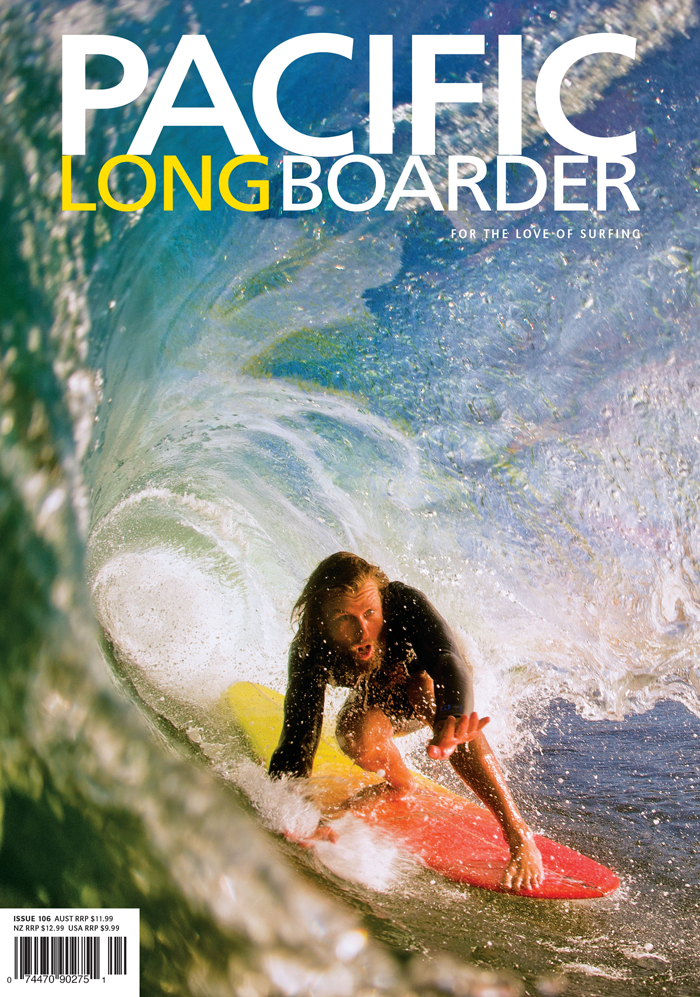 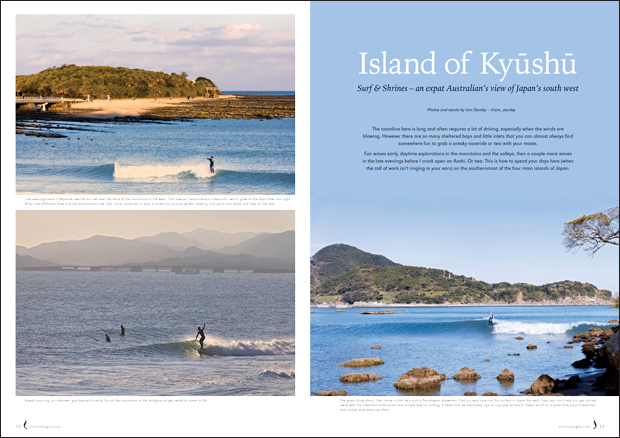 We might be Pacific Longboarder magazine but that doesn’t stop us taking you to wherever there’s surfing in the world and these days that’s just about everywhere. Kyushu is the southernmost of Japan’s four main islands and expat Australian and now long-term local Iain Stanley presents us with some very tasty and scenic small-wave spots with World Longboard Tour member the very stylish Taka Inoue featuring. 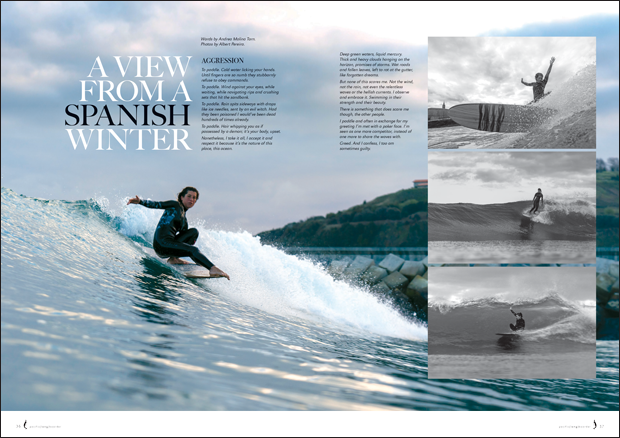 A VIEW FROM A SPANISH WINTER

Andrea Molina Torn doesn’t mind a serious powerful wave and first came to our attention when we saw photos of her charging Red Bluff on big boards. From the Cantabria region in northern Spain, Andrea colourfully and poetically describes the challenges of winter surfing at home, particularly those confronting a woman on a male-dominated break. It’s all worth it though, she says, and the proof’s in the moody photos from Albert Pereira. 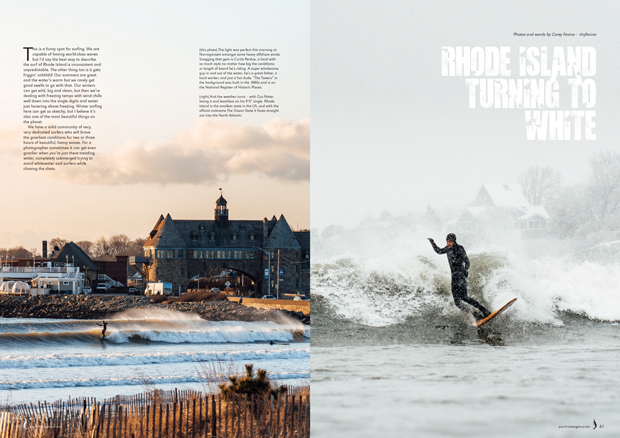 Cooler weather approaches but few of us have to confront the conditions the dedicated crew in this unlikely region have to. Young local surfer and photographer Corey Favino supplies the words and photos and tells us he loves the ocean so much he’s spending 95% of his time in the water shooting. That’s real commitment! There’s lots of snow and rubber and enough quality surf to make you almost understand why they’d venture out there. 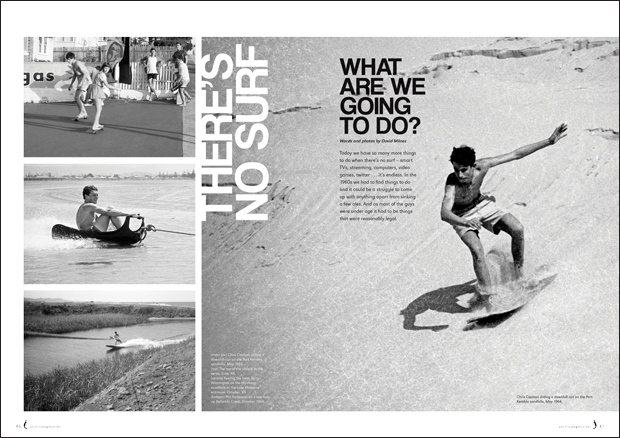 THERE’S NO SURF. WHAT ARE WE GOING TO DO?

Fair dinkum and whacko-the-diddilo how good were the good old days? Dave Milnes is old enough to remember and smart enough to have the photographic evidence. A fit 79 now, Dave is one of a very small handful of Australia’s great early surf photographers, starting on toothpicks, then Okanuis and he’s still rocking up to the monthly comps. You probably won’t have seen any of these photos before but you would have seen or heard about some of the exploits surfers got up to when there was no surf back in the ’60s. 16 pages of alternative action plus a few quality surf shots in between the sand-sliding, car-powered water skiing, skateboarding and much much more. 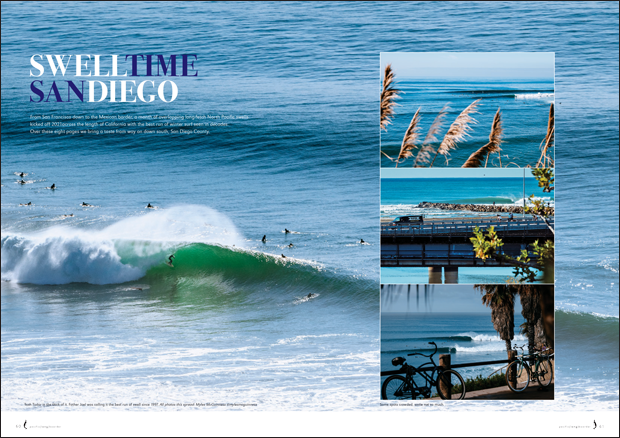 From San Francisco to the Mexican border a month of overlapping long fetch North Pacific swells kicked off 2021 with the best run of winter surf seen in California in decades. Eight pages of epic waves from down south in San Diego Country. 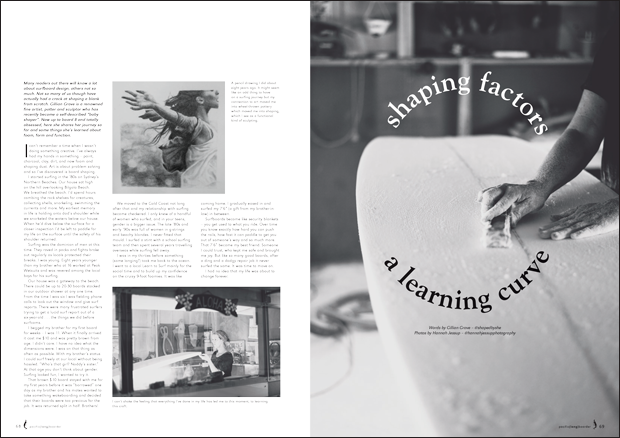 Gillian Grove is first and foremost an artist but after an unfortunate visit to a surf shop to buy her first longboard she was motivated to use her artistic talents to make a surfboard for herself at Richard Harvey’s surfboard making workshop on the Gold Coast. Guided by the master shaper she delved deep into the mechanics and techniques required to make a board and the bug bit so hard she’s now up to number 8. Her experience in chasing down the perfect board is particularly informative for those of us who leave all the technical stuff to our favourite shaper or buy off the rack, but most of all it’s an entertaining read as we share her experiences in the bay. 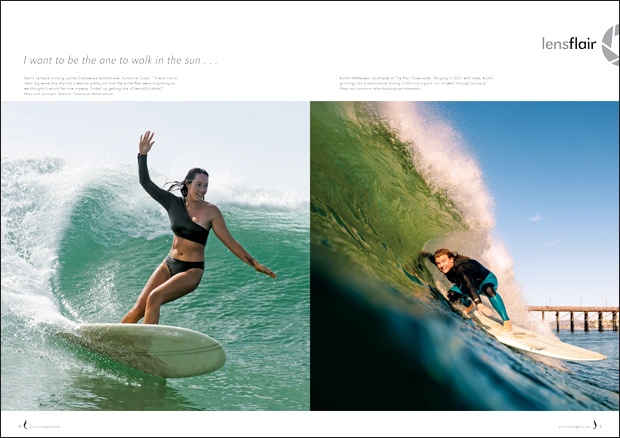 Cyndi got it right when she sang “Girls just want to have fun” and here is a spread of six of the absolute best doing just that.

Tedi Kurniadi is a stand-out longboard stylist in the popular village of Batu Karas in West Java. Lucky boy has had the place to himself along with a few locals since the lockdown.

Irish surfing is no joke, subscriber winners of the Carabine board and Barz Optics sunnies, NZ's West End Wiggle, Beatmakers the unlikely surf band from Finland, Long Reef Surf Fest and plenty more that you won’t see on MSM.

In a worrying development the GG and Mrs Guru have been getting off on the nomad thing and continuing their travels through parts of Queensland no self-respecting surf larrikin would be seen dead in.

John WItzig (yes, him!) reviews Line Up by Pierre Nouqueret which is, funnily enough, a very big book of photographs of line ups.

+ THE 91ST BOARD GIVEAWAY