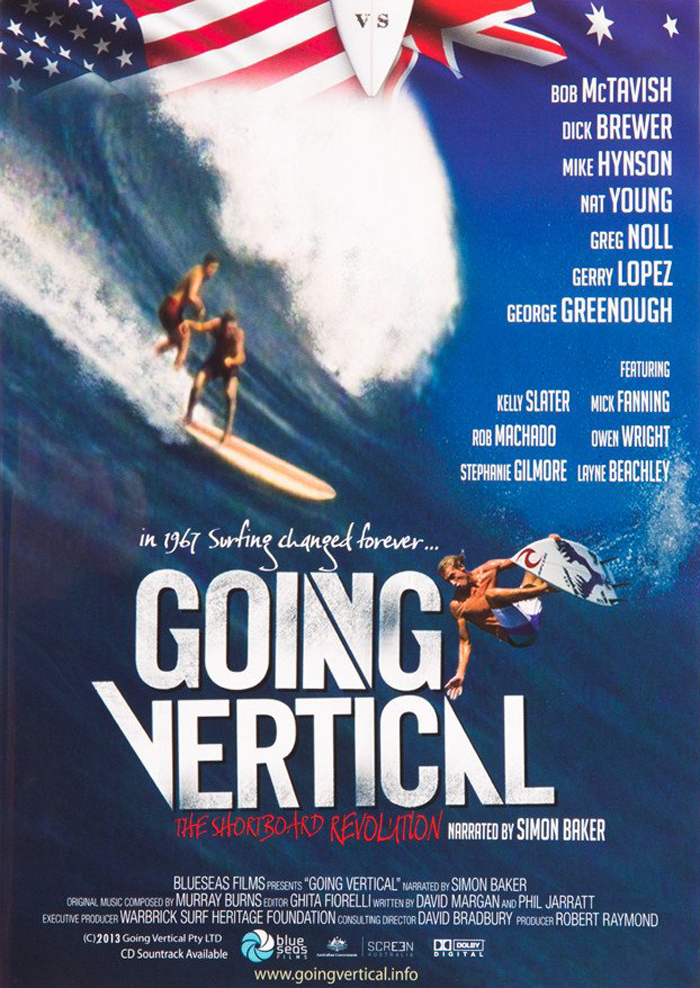 An epic search for surfing's great truth - who started the Shortboard Revolution?

In the 1960s, surfing underwent a fundamental change. The shortboard revolution occurred, and surfing changed from the golden age of longboards, to the shortboard surfing we know today. But who was the Ché Guevara of the surfing world? Going Vertical explores the history of surfing, looking at this pivotal era of surfing where surfboards changed forever. Both sides of the Pacific lay claim to starting the revolution, with the larrikin Bob McTavish of Australia and the supremely confident Dick Brewer from the USA, claiming pivotal roles.

Bob McTavish and Dick Brewer both have their own views on the development of the shortboard, and it is through their stories from the 60s that we are taken back to a different surfing world. A world where 16ft paddling boards were the surfcraft of choice, and where Pipeline was yet to be surfed 'properly'. McTavish takes us through his life in the 60s, from a daring escapade to Hawaii, to refining his designs in Noosa, Australia. He explains the good ideas, and the contributions of George Greenough to surfboard fin design that enabled his shorter boards to really perform.

McTavish surfed and designed with Nat Young, a world champion surfer of the day, to refine elements of the board designs and to keep one step ahead of the Americans. It is the involvement of Nat Young, George Greenough, and the winning of a world title, that really kicks of the revolution within the surfing world. The goal was now to interact with the wave, rather than ride it in a straight line. To go vertical. Brewer, by contrast, has a certain arrogance in his story telling. Stating unequivocally that he would excel in whatever he did - it just so happened to be surfboard design. Brewer explains that in Hawaii, there was a shift in the type of boards needed to surf bigger waves, specifically Pipeline. Traditional Guns were 10ft plus, and wouldn't turn on bigger waves.

Brewer and Gerry Lopez explain the transformation in riding big waves by drastically shortening the boards to allow the board to work the wave. Shortboards could surf big waves too, and allowed Pipe to be mastered.

From here, the paths of Brewer and McTavish cross. While there was initial opposition to McTavish in California and Hawaii, word spread that McTavish was doing something new. Suddenly the short board style of surfing - top to bottom - became popular. The revolution had begun, and boards had changed forever.

Whether you surf shortboards, longboards or are just interested in surfing in general, there is a good mix of current footage, archival footage and interviews with prominent surfing personalities, past and present, to make this film entertaining viewing. The competition and rivalry between McTavish and Brewer makes for some tension, but the stories told within this film will appeal to a wide audience, both surfers or non surfers alike.