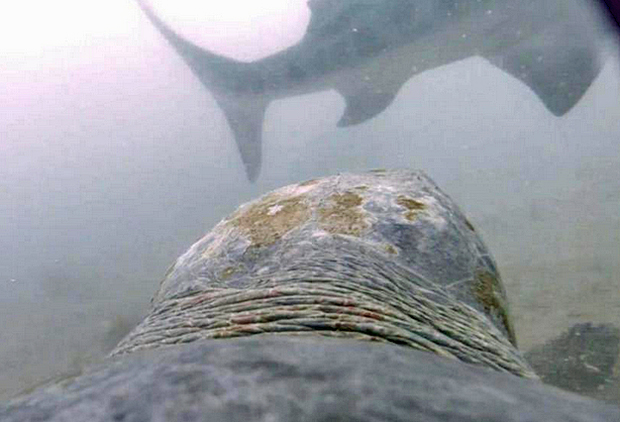 Flatback turtle 1, tiger shark 0 - one frame from the footage. 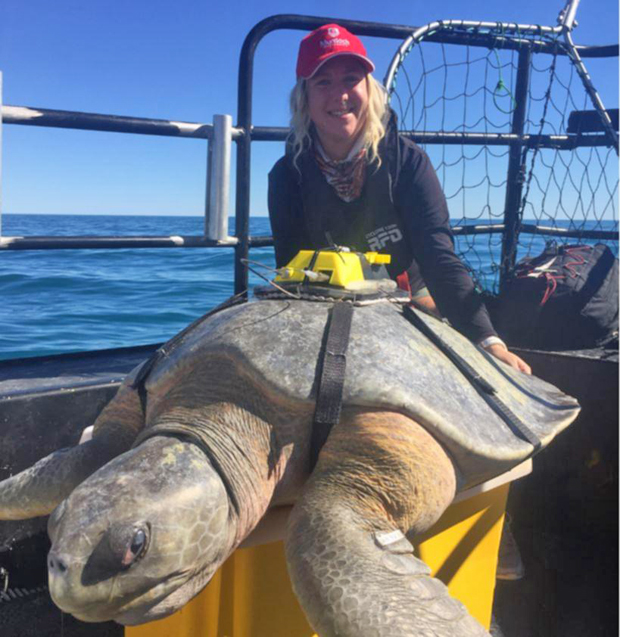 In a world first, a researcher at Murdoch University has captured never-before-seen footage of a flatback sea turtle defending itself from a shark attack by snapping back.

The footage, filmed from the turtle’s perspective, shows it biting and lunging at a tiger shark in a successful bid to fend off the predator.

PhD candidate Jenna Hounslow, who filmed the encounter using smart tags that track the wearer’s every move, said it was commonly believed that sea turtles’ main forms of self-defence were to flee or use their shell as a protective shield.

“When I realised a shark had shown up I got really excited and a bit nervous for the turtle, knowing that sea turtles are one of the main prey items for tiger sharks,” Ms Hounslow said.

“When I saw the turtle trying to lunge towards the shark, appearing to bite it, I couldn’t believe my eyes … We were all astounded.”

The footage was captured at Roebuck Bay, near Broome, while Ms Hounslow was researching the foraging behaviours of flatback sea turtles.

She said such aggressive, anti-predatory behaviour had never been observed before.

“Observations of sea turtles defending themselves against sharks have been made from the surface, where the turtles actively use their shell as a protective shield by turning away from the shark,” Ms Hounslow said.

“The aggressive biting-lunge behaviour has not been recorded in any species of sea turtle, let alone from the turtle’s perspective.

“There have been some anecdotal reports of aggressive behaviours displayed by male turtles to each other during mating season, and by hatchling flatback turtles when handled by humans in captivity, but nothing like this.”

Ms Hounslow said the footage raised new questions about the evolutionary trade-off between morphology and behaviour for flatback sea turtles.

“A long time ago, sea turtles evolved flippers so that they could swim efficiently and they lost the ability to withdraw inside their shell like land turtles can,” she said.

Flatback sea turtles are only found in Australia.

Though they spend most of their lives at sea, very little is known about their activities when they are away from their nesting beaches.

Ms Hounslow’s research aims to shed light on their underwater behaviour, including what they eat, when and where they are active or resting, and how their behaviour is impacted by threats such as climate change, marine debris and coastal development.

“This study really highlights that the behavioural repertoire of many animals could be increased and encourages the uptake of contemporary smart tags for research,” she said.