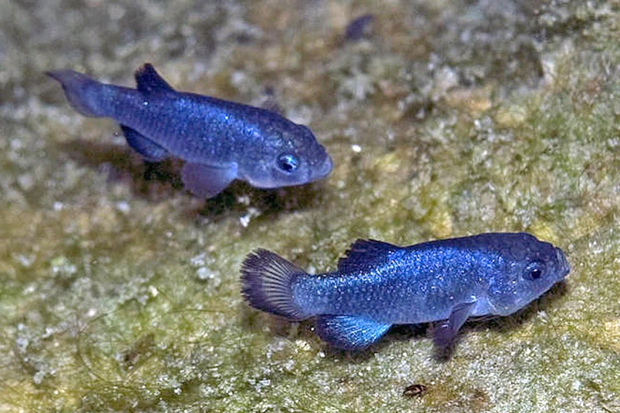 Pupfish were first listed as endangered species in 1967. About 136 live on a shallow underwater shelf in the geothermal pool, a drastic increase over their small population of 35 in 2013. 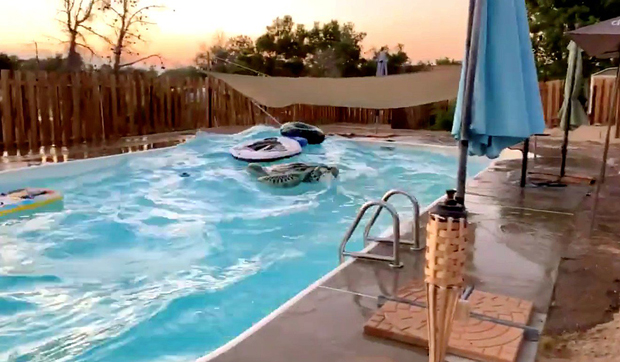 Waves erupt in a swimming pool during the earthquake in Ridgecrest. Photo: Reuters

The rarest fish on Earth swam for their lives when a powerful earthquake rattled Ridgecrestin California earlier this month.

The magnitude 7.1 quake that split open the floor of the Mojave Desert on July 5 shook up life far beyond its epicentre. In Death Valley National Park – some 70 miles away from where the earthquake was centred – 10-foot waves erupted inside Devils Hole, a 10-foot-wide and 25-foot-long pool that is the sole home to the endangered Devils Hole pupfish.

About 136 pupfish live on a shallow underwater shelf in the geothermal pool, a drastic increase over their small population of 35 in 2013.

Earthquakes as far away as Alaska and Papua New Guinea have agitated the water in Devils Hole, but the 7.1 Ridgecrest quake rocked it more than any other in recent memory. When the second, larger quake struck, video shows the inch-long iridescent-blue pupfish diving deeper into the 500-foot Devils Hole for safety.

“It was a big deal for the fish,” said Dr Jennifer Gumm, a biologist and manager for the Ash Meadows Fish Conservation Facility of the US Fish and Wildlife Service. “The earthquake causes what’s called a seismic seiche, and it’s basically a sloshing of the water back and forth.”

Full-grown pupfish weren’t hurt by the waves, but the quake did wipe out newly laid fish eggs and the tiniest of pupfish larvae.

Still, it’s not all doom and gloom for the fish, said Kevin Wilson, an ecologist with the National Park Service.

“We know there’s this short-term negative impact, but a long-term positive impact,” Wilson said. “As organic algae material dies, it can take oxygen out of the water up to where eggs have laid. Earthquakes can reset the system by removing this dying material.”

Timing plays a big role in whether seismic seiches help or hurt the underwater environment, though.

“We’re still in summer when the sun hits the shelf and algae grows,” Wilson said. If the quake had struck later in the year, new algae that is crucial to the pupfish habitat wouldn’t have the same chance to grow.

Wilson said the tiny fish have evolved to handle the sloshing that goes with earthquakes. They likely had a five-second warning before the ground began to rattle, pushing them to swim toward deeper waters.

And while the quake-spawned waves washed away the algae and tiny crustaceans the pupfish eat, they will not starve, biologists said. The National Park Service supplements their diet with frozen food, a decision made in 2007 after several emaciated fish were found.

“We have a whole calculation on how we do that,” Wilson said.

The Ridgecrest temblor also had another positive impact on the pupfish: spurring them to breed, possibly because the hormones that were released by the shock of the quake.

Gumm said that once the fish returned to the pool’s shallow shelf, they started spawning – good news for a group that once suffered dismal counts.

In 1967, pupfish were labelled an endangered species, one of the first in the United States.

Nearly 10 years later, in 1976, the Supreme Court ruled in the fish’s favour when a ranch that was pumping groundwater lowered the water level at Devils Hole and further endangered the creatures, which have lived in the area for an estimated 10,000 years.

The fish have remained under the watchdog protection of the law. In 2018, a man was sentenced to one year in prison for endangering the population after he and two others broke into Devils Hole in 2016.

The man stepped into the water, smashing pupfish eggs and larvae in violation of the Endangered Species Act.

“I consider the Devils Hole pupfish a canary in a coal mine under a changing climate.”