Japan’s Naomi Taoka who knocked out Tully White in the second round - Australia’s only competitor to make the trip thanks to Covid. Pic: Ito 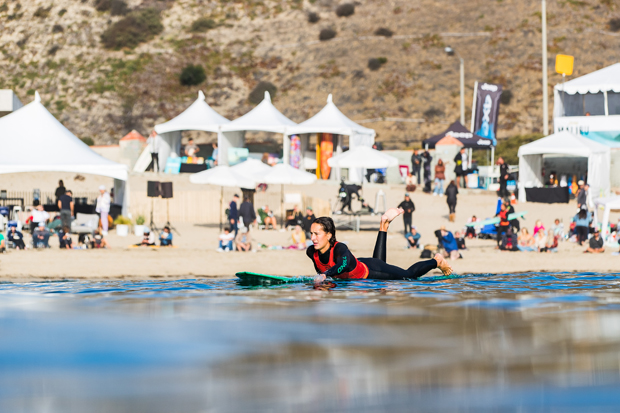 East Coaster Tony Silvagni on one of the bigger ones. Pic: Ito

Early eliminations unfolded and with them came World Title hopes dismantled on both the men’s and women’s draws.

Honolua Blomfield (HAW) dug deep to earn a clutch Round 1 victory in the slow conditions and took full advantage of a late-heat set wave to earn a valuable 5.17 (out of a possible 10) before her Round 3 duel with fellow Oahu, Hawaii, competitor Keani Canullo. The 16-year-old put pressure on the 2x WSL Longboard Champion but Blomfield was not phased and took the lead back immediately to secure her Quarterfinals spot.

“To be honest I don’t really have nerves in contests and just try to have fun,” said Blomfield. “I love surfing and I love competing. Now I’m just taking it one step at a time and it’s exciting to be going for a World Title again. It was pretty small today but I got a few so I’m stoked.”

Malibu’s own Soleil Errico overcame young talents Mahina Akaka (HAW) and Avalon Gall (USA) with a brilliant 6.67 showcasing her quick footwork and wrapping carves to stay perfectly positioned throughout the wave. The 2018 WSL Longboard Champion then faced Elimination Round 2 standout Zoe Graspiron (FRA) in a low-scoring affair heading into the halfway mark. The French competitor, however, turned it on towards the end of their duel and garnered a 7.33, securing her victory over the World Title contender.

“It’s one of my best results so far and I’m really stoked,” expressed Graspiron. “It was very hard because it was Soleil (that I was competing against). She is a very tough competitor but I had no pressure, nothing to lose so I just went out there and had fun.”

Two-time World Longboard runner-up Chloe Calmon (BRA) earned a big win in Round 3 over Hawaii’s Haley Otto to keep her hopes of finally clinching a World Title alive after narrowly avoiding an Elimination Round 2 appearance.

Current No. 2 Kelis Kaleopa’a (HAW) advanced into Round 3 behind Lindsay Steinriede (USA) but the 16-year-old World Title contender’s hopes were dashed by one of her role models, 2x WSL Longboard Champion Kelia Moniz (HAW) in a brilliant showcase.

Men’s World Title up for Grabs

Following that bout, Delpero had to face Brazilian duo Jefson Silva and Rodrigo Sphaier in a must-win scenario. But, Sphaier capitalized in the dying minutes to secure a 6.33 and overtake second-place behind an in-form Silva - dispatching the World Title frontrunner.

“I just stuck to my heat strategy to wait for the best waves and it worked out in that heat,” explained Silva. “I just tried to stay patient and do my best when the waves came. It was a crazy heat with Edouard (Delpero) being at the top and surfing against Rodrigo for so long, he’s such a good competitor. That was a big heat for me.”

World Title contender Harrison Roach (AUS) came into this event at No. 2 and showed his poise under pressure with a big Round 1 win, and now leads the rankings with Delpero’s elimination. But, the Australian is joined by heavy-hitters such as 3x WSL Longboard Champion Taylor Jensen (USA), 2x WSL Longboard Champion Joel Tudor (USA), Longboard Tour veteran Kai Sallas(HAW), and more.

Sallas showed his prowess in the lineup for an immaculate 15.00 heat total in his Malibu debut against fellow long-time competitors Ben Skinner (GBR) and former WSL Longboard Champion Phil Rajzman (BRA), who was later eliminated in Round 2. Though the Oahu, Hawaii competitor needs a lot of scenarios to play in his favor, the opportunity for his maiden World Title lies before him with more showcases such as today’s.

“Me, Ben (Skinner), and Phil (Rajzman) have been doing this a long time so we’ve had a lot of good heats together,” expressed Sallas. “There’s a lot of new faces on the Tour now so it’s pretty funny we all got matched up but we had consistent waves which was really nice. Malibu’s such a good wave to noseride and that was my goal no matter what came was just to get a good noseride.”

Kirra Seale (HAW) stunned those in attendance with her brilliant surfing, notching a solid 13.10 heat total in Round 3, despite having a broken foot. The North Shore, Oahu, athlete showed her grace despite the pain and finds herself into the Quarterfinals for just the third time in a WSL event.

“I actually broke my foot on Thursday so I didn’t know if I was going to be able to compete,” laughed Seale. “But the doctor said I couldn’t make it worse so as long as I could handle the pain I was good to go. I’m really happy to be here and competing after not knowing for a few days.”

Oceanside, California’s Tour veteran Kevin Skvarna found himself locked into a battle with Brazilian talent Augusto Olinto and reigning WSL Longboard Champion Justin Quintal (USA). Skvarna’s last-minute effort earned him a 5.33 and a close heat win, sending Quintal to Elimination Round 2, where he earned a big Heat 1 win, to keep pace with fellow World Title contenders though a tall order as he currently has 7,500 points to build upon.