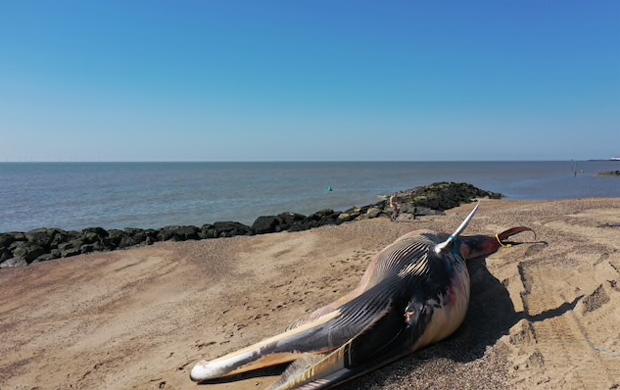 March 30 - A fin whale stranded on the shore at Holland-on-Sea, a town on the eastern coast of England. Although they’re a global phenomenon, whale beachings regularly occur along the North Sea's shallow coastlines. PHOTOS BY ROB DEAVILLE, CSIP-ZSL 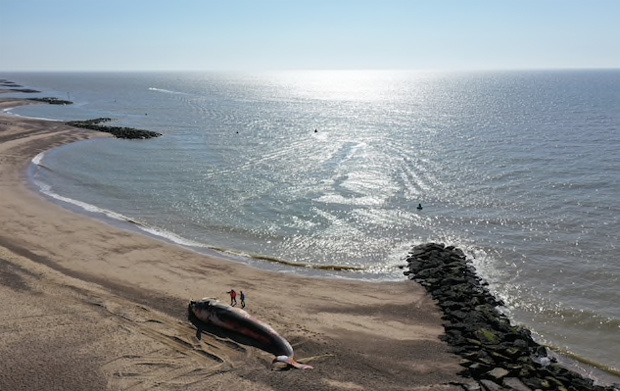 Why do whales beach themselves? The latest from National Geographic:

Every year thousands of whales, dolphins, and other marine animals wash up on beaches around the world. This phenomenon—called beaching or stranding—occurs among both healthy individuals as well as injured (or dead) animals that are driven ashore by prevailing winds. Sometimes a group of marine animals beach themselves together in what are known as mass strandings, and other times a region might see an unusual number of strandings over a period of time.

In the United Kingdom, the Zoological Society of London’s Cetacean Strandings Investigation Programme (CSIP) has logged more than 12,000 stranded cetaceans since 1990. High-profile events—such as the 2015 stranding of more than 300 sei whales in southern Chile’s Patagoniaregion, or a string of beaked whales that washed ashore in Guam between 2007 and 2019—show this is a truly global phenomenon. For any stranding, the cause can be traced to a number of factors.

“There's probably as many reasons for why whales and dolphins strand as there are strandings themselves,” says Kevin Robinson, director of the Cetacean Research & Rescue Unit, a Scottish marine conservation charity. Here’s what scientists know about why whales beach themselves—from confusing coastlines to threats posed by humans.

Coastal topography and tidal ranges make some regions traps for marine mammals. Mass strandings regularly occur in places such as the Farewell Spit in New Zealand, the North Sea’s coastlines, and Cape Cod in the eastern United States. Nick Davison, strandings coordinator for the Scottish Marine Animal Stranding Scheme, explains that these regions are too shallow for whales to navigate because their echolocation ability is designed for deep water.

Also, during a tide cycle, water can recede several kilometers in just a few minutes, meaning some marine animals could get caught. Project Jonah’s Daren Grover explains that if animals don’t notice that they’re moving into shallower waters, it can cause trouble when the tide turns. “The water simply drops away,” he says. “They’re left high and dry.”

A beached whale could be sick or injured, senile, lost, unable to feed or otherwise compromised—for example, experiencing a difficult labor—or simply old, explains Dan Jarvis, a welfare development and field support officer at British Divers Marine Life Rescue. Weakened animals might drift with the current until they are brought ashore, while those that become disoriented can accidentally wander into shallower waters.

Predation can also drive animals to beach themselves—whether they’re predator or prey. Grover recalls instances of dolphins swimming onto a beach to flee an orca as well as orcas becoming stranded while hunting stingrays in shallow water. While launching themselves onto shore is a common orca hunting technique, sometimes they can miscalculate and have to wait until a large enough wave washes them back into the ocean.

Humans are also part of the problem. Fishing, pollution, ship strikes, and more are responsible for many of the injuries (and subsequent deaths) that lead to strandings. Entanglement in fishing lines is the primary human-made cause of death for cetaceans. Robinson attributes fishing to the functional extinction of the baiji dolphin and the impending vaquita extinction. Overfishing also deprives cetaceans of their main sources of food, leading them to venture into coastal or tidal waters to hunt.

Some causes, like pollution, are insidious. All chemicals eventually make their way to the ocean, where they cause lasting problems. Rob Deaville, project manager at CSIP, says there’s evidence of diseased animals having higher levels of chemical pollutants than healthy ones, although it’s hard to prove causation. Meanwhile, plastic pollution can also harm these animals through entanglement, ingestion or contamination of microplastics accumulating in their bodies.

Finally, the possibility of being struck by a passing ship poses a particular problem for slow-moving species such as North Atlantic right whales. Collisions can cause massive injuries (or death) and lead to beaching.

Noise pollution, including sound pulses from the use of sonar and seismic surveys, interferes with whales’ ability to communicate and navigate and can drive them ashore by deafening, disorienting, or frightening them. Deep sea species living in the open ocean, like beaked whales, are particularly susceptible to sonar, even from miles away. Naval sonar activity is thought to be associated with the series of beaked whale strandings in Guam, for example.

Robinson points out that whales are “perhaps the most acoustically sophisticated animals on earth.” Because sound travels faster through water than air and keeps its intensity for longer, the sounds can cause injuries to their ears.

“Every time [the whale] then tries to dive, it can’t equalize the pressure,” Robinson says. Unable to dive, the whale cannot hunt and so becomes both malnourished and dehydrated, because it gets water from its food. Weakened, it will drift with the current and, eventually, end up on the shore.

Mass strandings are defined as any event involving two animals—except for a mother and her calf—up to an entire pod, which can range from a handful to hundreds of whales. They usually occur in highly social species such as pilot and melon-headed whales. With their herding instinct, the entire group will stay together even if one is sick or compromised, which sometimes causes them to strand while trying to support a distressed individual.

Their bonds are so strong that if the healthy animals are released back into the ocean—or “refloated”—and hear a pod member calling to them from shore, they will re-beach themselves to be with that animal. To prevent this, rescuers must attend to the stricken animal before refloating the pod.

When a whale beaches, it’s a race against time. Usually supported by the water, a whale’s body weight will crush it on land. Toxins build up from the reduced circulation, poisoning the animal. Out of the water, a whale’s thick blubber can also cause it to overheat. Like other mammals, whales breathe air, so they can drown when stranded if water enters their blowhole at high tide.

If you encounter a beached whale, do not attempt to move it. Dragging the animal back into the water is “completely the wrong course of action,” Robinson says, as it can damage their delicate tail flukes and may be fatal if the animal needs veterinary treatment before being released. Instead, marine charities, the coast guard, or emergency services can help while you await trained volunteers and veterinarians. Keep the animal upright, wet (avoid getting water in its blowhole,) and cover it to prevent sunburn.

Still, survival rates are low. Rescue teams will only try to refloat an animal if it is healthy enough to survive. The only other options are taking the animal into captivity—in countries that allow it—or euthanasia. While harrowing, Jarvis argues this is the best welfare decision rather than subjecting a wild animal to captivity.