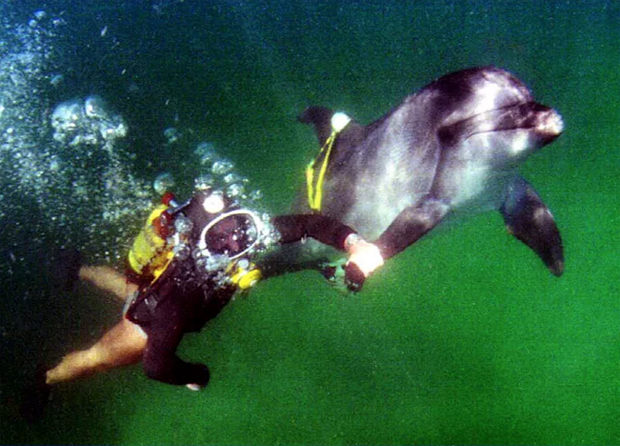 A trainer works with a dolphin that used to belong to a top-secret division of the Soviet Navy in the military port of Sevastopol. (Reuters) 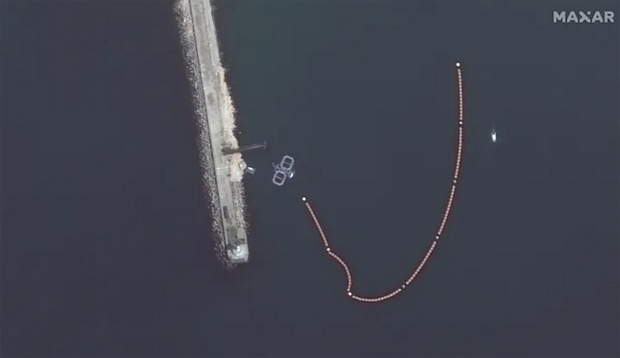 A satellite image on Friday shows dolphin pens that have been placed at the entrance to Sevastopol Bay, Crimea. (Satellite image 2022 Maxar Technologies/Handout via Reuters) 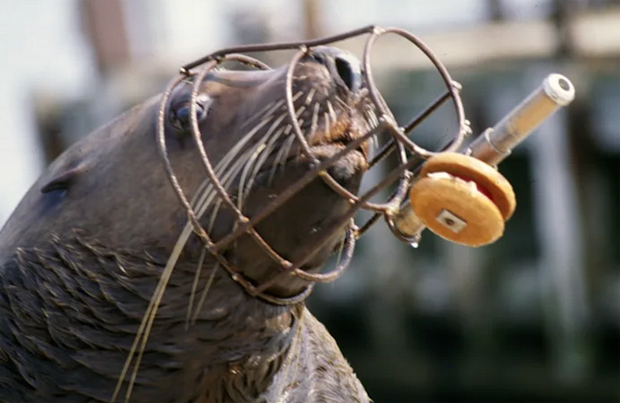 A marine mammal is fitted with a cage and instrument during training to search for mines and saboteurs in the Crimean Peninsula in 1992. (Wojtek Laski/ Getty Images) 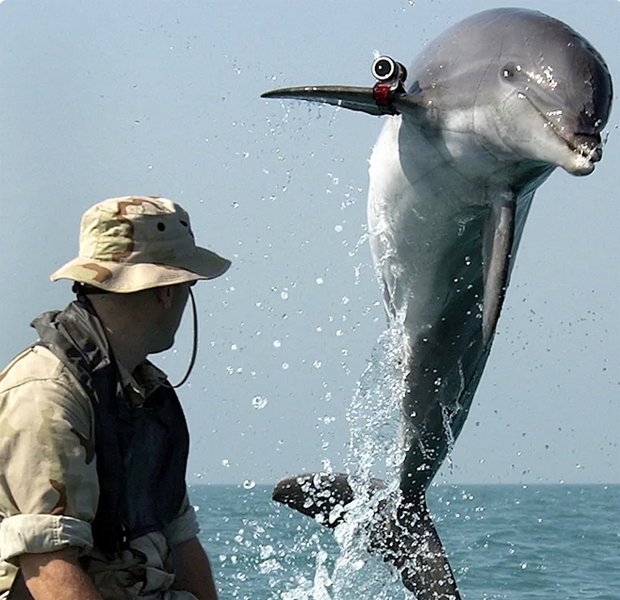 A bottlenose dolphin leaps out of the water while in training for mine clearing in the Arabian Gulf in 2003. (Brien Aho/U.S. Navy via Reuters) 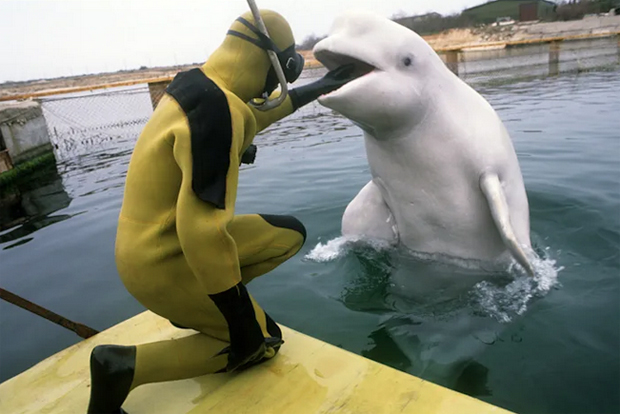 A member of the Ukrainian military trains a marine mammal in the Crimean Peninsula in 1992. (Wojtek Laski/Getty Images)

From the unspeakable war in Ukraine – a really oddball article from Yahoo News:

After reviewing satellite images of a key port in Crimea, the U.S. Naval Institute assessed that Moscow had deployed trained dolphins to protect a naval base in the Black Sea from potential Ukrainian attacks.

Submarine analyst H.I. Sutton said two transportable dolphin pens were moved into Sevastopol harbor in February, the same month Russia invaded Ukraine. The mammals, according to the analyst, may be used to prevent enemy divers from infiltrating the harbor and sabotaging Russian warships.

Has Russia used marine mammals for military purposes before?

According to the Moscow Times, Russia has been training sea mammals since the Soviet era. In the late 1960s, the Soviet Union used the port of Sevastopol as a base to train dolphins and whales to engage in activities like searching for mines and planting explosives, and it’s also believed that the Soviets trained the sea creatures to kill underwater targets. However, this program was thought to have been neglected when the Soviet Union fell in the 1990s. In 2012, Russia denied a report that claimed it was developing a military training program for dolphins to attack enemy divers with weapons attached to their heads.

Before Russia's annexation of Crimea in 2014, the aquarium in Sevastopol — which at that time was part of Ukraine — had been training dolphins to swim with children with special needs and had been used in various therapy sessions. However, after the region was seized by Kremlin-led forces, one worker at the aquarium told the state-owned Russian news outlet RIA Novosti that the dolphins and seals were once again receiving military training. The employee reportedly said engineers had been working to develop the program, which would use sea mammals to find sunken objects and enemy divers using their sonar communications systems.

Viktor Baranets, a Russian reserve colonel, confirmed to a Russian broadcaster in 2019: "We have military dolphins for combat roles; we don't cover that up.

"In Sevastopol we have a center for military dolphins, trained to solve various tasks, from analyzing the seabed to protecting a stretch of water, killing foreign divers, attaching mines to the hulls of foreign ships.”

In 2016, the Russian Defense Ministry purchased five bottlenose dolphins. The mammals were bought for $26,000 — $5,200 each — and it was not disclosed what their role would be.

Two years later, a report by the Russian TV station Zvezda, owned by the Ministry of Defense, revealed that the navy had been training beluga whales, dolphins and seals in the Arctic waters, the Guardian reported. The report stated that belugas had been dropped from the program when they began to get sick after swimming for long periods in the freezing waters, according to the Siberian Times.

But it appeared belugas had not been dropped by the Russian navy when, in 2019, a beluga was found off the coast of Norway. The whale, which was wearing a harness with a pouch to hold a GoPro that was inscribed with the words “Equipment of St. Petersburg,” was spotted by fishermen after it began harassing their boats. Marine experts believed the strange behavior of the beluga was due to its possible military training.

“If this whale comes from Russia, and there is great reason to believe it, then it is not Russian scientists but rather the navy that has done this,” Martin Biuw, of the Institute of Marine Research in Norway, told the Guardian.

But Baranets shot down the beluga’s link to Russia, saying at the time: “If we were using this animal for spying, do you really think we’d attach a mobile phone number with the message ‘Please call this number’?”

Have other countries done the same?

There are two known military dolphin training facilities in the world, one in Sevastopol and the other at the NIWC Pacific, or the Naval Information Warfare Center, in San Diego. The U.S. Navy has been training dolphins and sea lions since the Vietnam War. In 1969, an experimental Navy project called Project Deep Ops saw two killer whales and a pilot whale trained to retrieve objects lost in the ocean that were inaccessible to machines and divers. Animals such as California sea lions and bottlenose dolphins have been used to detect mines on the seafloor.

Why use dolphins, sea lions and whales?

There are a number of reasons why sea mammals such as dolphins, sea lions and whales would be used for military purposes. Due to their sonar communication systems and their ability to dive deep, the animals are far more effective than any recent technology.

“It’s not surprising that [Russian President Vladimir] Putin of all people would think that dolphins are a weapon of war,” Andrew Lambert, a professor of naval history at King’s College London, told NBC News. “Like so much of what we’re seeing in Ukraine, it’s the Soviet Union’s work being reenacted by the current Russian government.” He added about the dolphins: “This is their world, and they’re going to find you underwater very, very quickly.”