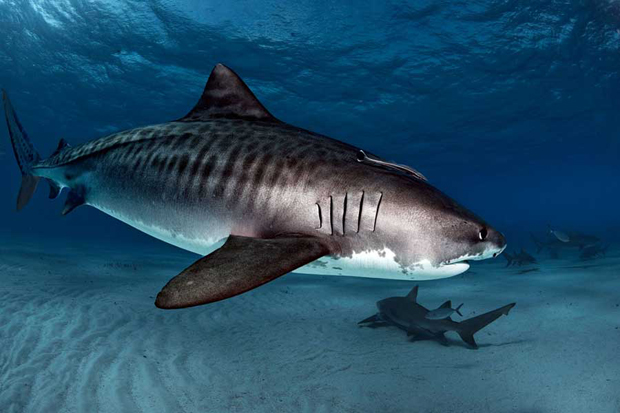 Two kilometres out to sea off Moffatt Beach on the Sunshine Coast at 5.30am this morning (Thursday), the four-metre tiger rammed a kayaker sending him flying through the air before chomping down on his craft. And it hung onto it for some time!

The kayak flipped over, and the lifeguards said at some point the fisherman managed to turn it back upright. The man radioed the Caloundra Coast Guard for help.

The shark kept circling, and was still in the area when the jet skis arrived some 45 minutes later.

According to an interview with the first responder on ABC radio, the kayaker didn’t have a fish on at the time, so there was no blood in the water, the shark just turned up and broadsided him.

He was also a little hard to find, and it took a bit of time with binoculars to locate him. “The kayak had been punctured and was apparently sinking but an air pocket in the front prevented it from going completely under," he said.

The kayaker regularly fishes in the area, and apparently he’s in some shock, but otherwise fine! And hopefully off to the Moffat Beach newsagent to buy a lottery ticket.