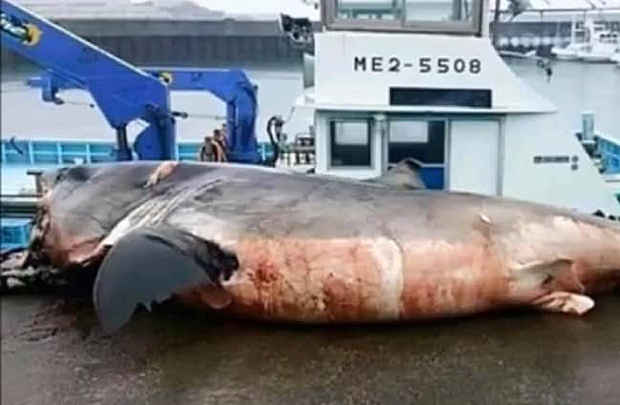 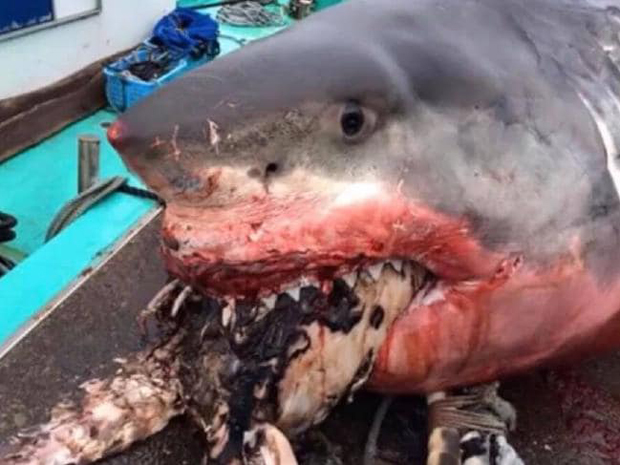 Whopping great white bites off more than it can chew

A fisherman witnessed a gory scene as a monster great white shark was hauled from the water after the animal choked to death on a sea turtle.

Greg Vella, who lives in Osaka, Japan, was out on a commercial boat fishing for tuna in the Pacific Ocean when someone reported seeing the huge shark.

“I heard chatter on the radio that there was a white shark swimming around with a big sea turtle in his mouth,” Mr Vella wrote in the Facebook group Commercial Salmon, Albacore & Crab Fishers.

“People started to joke about it, so I didn’t pay it any more attention.”

The following day the shark was found dead and tangled in some netting. The fishermen who spotted the shark the day before said the animal looked like it was struggling to get the turtle out of its mouth.

Mr Vella posted pictures of the monster shark, which he claimed weighed around two tonnes, after they had pulled it from the water. The gruesome photos show a giant turtle hanging out of the shark’s bloodied mouth.

Mr Vella said the crew were disappointed the animal had died.

“The commercial guys were bummed, as white sharks don't bother their commercial fishing, and most certainly do bother the things that eat our catch.”