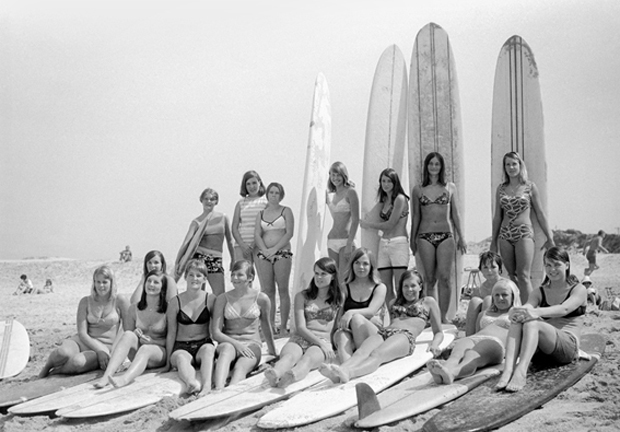 The strong Kurranulla Wahines club at Wanda 1966, photo by Bob Weeks, one of many featuring in the the Southern Swell exhibition.

Waves of change put women in the Cronulla surf picture

Feminism was hard to find at Cronulla beach when Kathy Lette, the co-author of Puberty Blues, was a teenager growing up in the southern suburbs of Sydney.

“We weren’t allowed to surf,” she said. “All we were allowed to do was mind the towel, fetch the chiko roll and massage male egos. We were demure and decorative, draped over the arms of our board-shorted Neanderthals, like human handbags.”

Men still dominate the waves in the Shire but that is “slowly shifting”, said Carrie Kibbler, the co-curator of a new exhibition about surfing.

“Younger girls, many of whom are in the local boardriders clubs, are just as likely to be in the water as their male counterparts.”

Southern Swell charts the history of surfing in southern Sydney, which started when Duke Kahanamoku caught a train to Sutherland in 1915 before arriving at Cronulla, where he put on a surfing demonstration.

Kibbler said she had long nursed the idea of staging a show about Cronulla’s surf history.

“My husband is a surfer and for years I’ve spent time with him looking at vintage and contemporary boards as well as photographs, books and magazines, watching surf movies and travelling up and down the east coast so he can catch waves,” she said.

Four decades after the Duke, American surfers Greg Noll and Mike Bright introduced a new type of surfboard to Australia.

“After getting off their flight at Sydney airport, they visited Cronulla,” Kibbler said. “It was here that they paddled out into the waves at Cronulla point with Malibu boards which is now acknowledged as the birth of modern surfing in Australia.”

A local surf industry was created when Brian Jackson opened his surfboard factory in 1957, while the world’s first surfing contest under floodlights was held at Elouera beach in 1984.

Surfing continues to be integral to Cronulla’s culture, with a national surfing reserve declared in 2008.

“The reserve acknowledges the surfing way of life and links past, present and future generations who share the natural ocean environment in Cronulla,” Kibbler said. “It celebrates the riding of waves and the significant contribution that local surfers and surfing culture plays in our community.”

Lette regularly returns to the Sutherland Shire where her mother and sisters still live.

Researching To Love, Honour and Betray, a sequel to her popular 1979 novel, the best-selling Australian author said the area’s beach culture had changed for the better, with women no longer relegated to the sand.

“They’re surfing their brain waves and the briny, determined to be treated as equals instead of sequels,” she said. “The young surfie boys have also finally started to flop onto the shore and evolve."