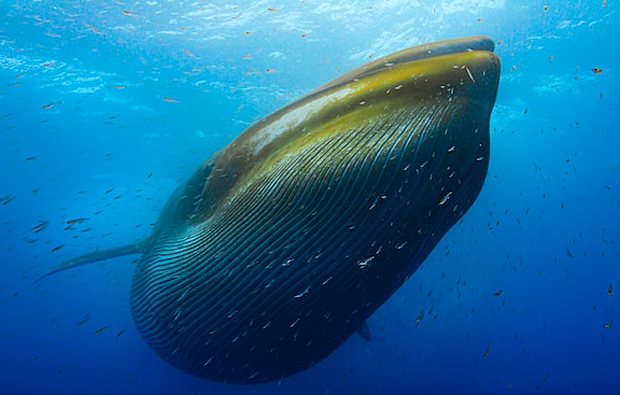 The fin whale is the second-largest animal on the planet. Recently, scientists and filmmakers captured a feeding frenzy on video of some 300 fin whales off the coast of Antarctica. Pic: Bertie Gregory, for Nat Geo

Watch the largest feeding frenzy of fin whales ever recorded

This ocean we share never ceases to amaze - check this out from Nat Geo: Weighing 80 tons, fin whales are the second-largest animal on the planet. Just a few decades ago, these massive mammals had nearly been driven to extinction, with 700,000 killed for their blubber during the 20th century alone. Scenes of masses of fin whales gathering off the coast of Antarctica to feed together were thought to be relics of the past.

Now, however, scientists and filmmakers report an encouraging finding: video proof of a feeding frenzy of some 300 fin whales off the coast of Antarctica.

“It looked like cannons in an old sea battle,” says wildlife filmmaker Bertie Gregory, a National Geographic Explorer, of seeing the spouts of water from the whales’ blowholes on the horizon. “It was like, OK, this is a thing that happens. It's not just a fairy tale.”

The event was caught on camera for Epic Adventures with Bertie Gregory, a new National Geographic show on Disney+, and the findings, which include new information about migration routes, will soon appear in the journal Royal Society Open Science.

The team says the revelation is proof that the 1982 moratorium on whaling has allowed some species to bounce back. Prior to this year, the largest number of fin whales feeding in one place officially recorded by scientists stood at a paltry 13 animals.

Nonetheless, large gatherings have been sighted in more recent decades, says Paula Olson, a marine mammal biologist with NOAA. “Personally I have seen hundreds at a time,” she says, “so I do not find an aggregation of 300 that surprising. Uncommon, but not surprising.”

Earlier in 2022 Gregory, the University of Hamburg’s Helena Herr and colleagues published a study in the journal Scientific Reports documenting a feeding pod of some 150 fin whales in 2019. But, Gregory says, their spring 2021 expedition to the same part of Antarctica has doubled that record.

You might think locating hundreds of giants would be easy work, but you’d be wrong.

“Admittedly, the Southern Ocean is a very big place,” says Leigh Hickmott, a whale biologist based in the United Kingdom and Gregory’s collaborator on the fin whale project. The two met while researching and filming Antarctic killer whales on another expedition for National Geographic.

To find where the fin whales might be feeding, Hickmott first scouted for areas where deep ocean currents slammed against the steep walls of the continental shelf. Such areas create an upwelling of nutrients, Hickmott says.

Those nutrients feed phytoplankton, which in turn feed shrimp-like crustaceans known as krill. And though krill are tiny—often no bigger than two inches in length—they are considered a keystone species, without which entire ecosystems would collapse. Fin whales, with rapid lunges and enormous mouths, gulp down krill by the literal tons—up to two tons a day, in fact.

With all of this in mind, in March of 2021, the team headed to Elephant Island, made famous as the site where explorer Ernest Shackleton and his crew were marooned in 1916 after a failed attempt to cross Antarctica. Gregory and Hickmott found Elephant Island no more hospitable than Shackleton did.

Winds approaching the speed of a hurricane howled past the island, forcing the crew to anchor offshore and wait out the weather. Seasickness plagued the crew. During the month the team spent in Antarctica, just six days were calm and clear enough for filming on the open ocean.

But they would soon be rewarded.

A ‘Holy Grail’ of wildlife film

Near the end of the expedition, after the wind died down and the clouds lifted, Gregory got the shots he had come for—hundreds of fin whales lunge-feeding on krill with Elephant Island’s snow-capped peaks standing tall in the background.

In small inflatable rafts, the crew quietly piloted their way into the middle of a boiling soup of Antarctic wildlife.

“There are just millions of birds,” Hickmott remembers, as well as humpback whales, southern right whales, penguins, fish, and of course, colossal clouds of krill. “The sheer amount of biomass and life in front of your eyes is absolutely incredible.”

With drones in the sky and divers in the water, the team managed to film the feeding frenzy from all sides.

“There’s just something about seeing these big animals en masse, all together, that’s really magical,” says Gregory. “It’s one of the Holy Grails of wildlife film.”

But this was also about more than just making good television, he says.

Scientists still know very little about where fin whales roam and what their daily lives look like, so Hickmott outfitted four whales with temporary satellite tags to find out. The tags, two of which continued to transmit until May, allowed the team to track the animals for the first time as they migrated away from the feeding areas and up the coast of Chile, hinting at the species’ migratory routes. If we can learn more about these animals, we might be able to protect them better, Hickmott says.

The findings couldn’t come at a better time.

“Scientifically, it’s a time when there’s a lot of darkness,” Hickmott says, referring to the overwhelming nature of overlapping crises including climate change, habitat loss, and mass extinction.

But the fact that fin whales can once again come together in numbers not seen since before industrial whaling means that conservation efforts have worked.

“It’s inspiring, and it’s incredible, but it’s also very humbling to see,” says Hickmott. “Given the chance, nature can come back.”