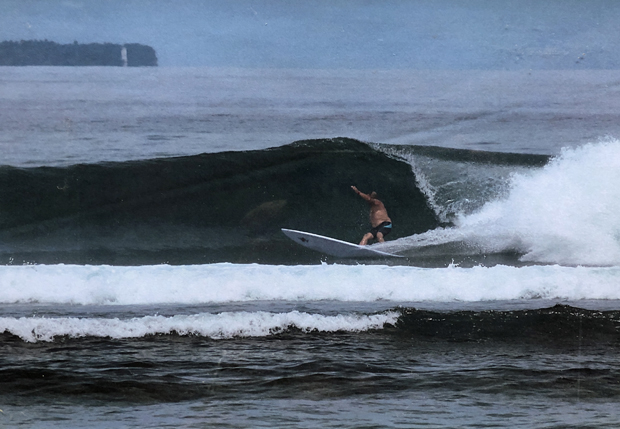 Kym in the Mentawai. 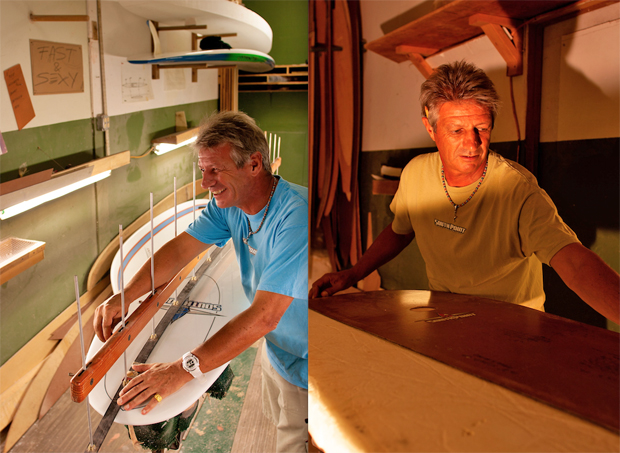 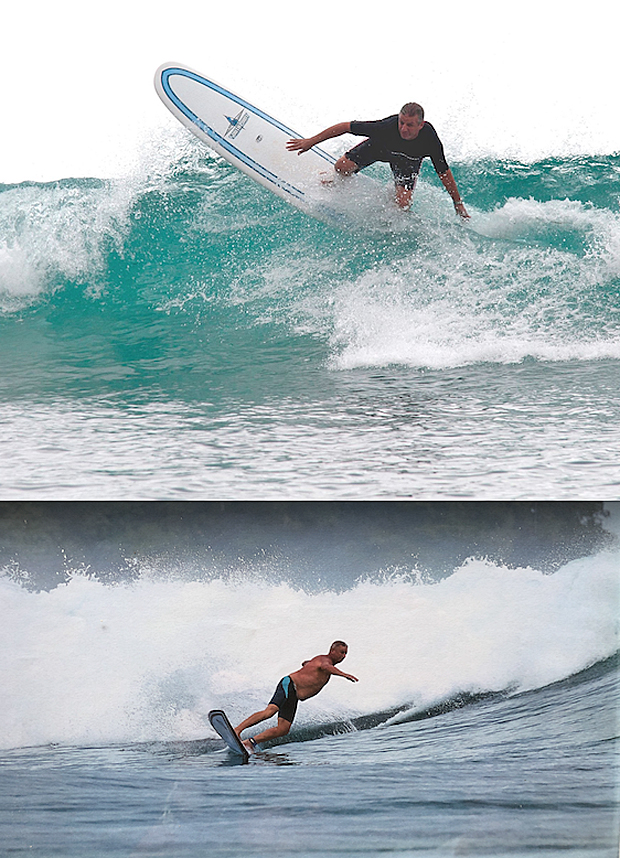 (top) At Waikiki. (bottom) In the Mentawai. 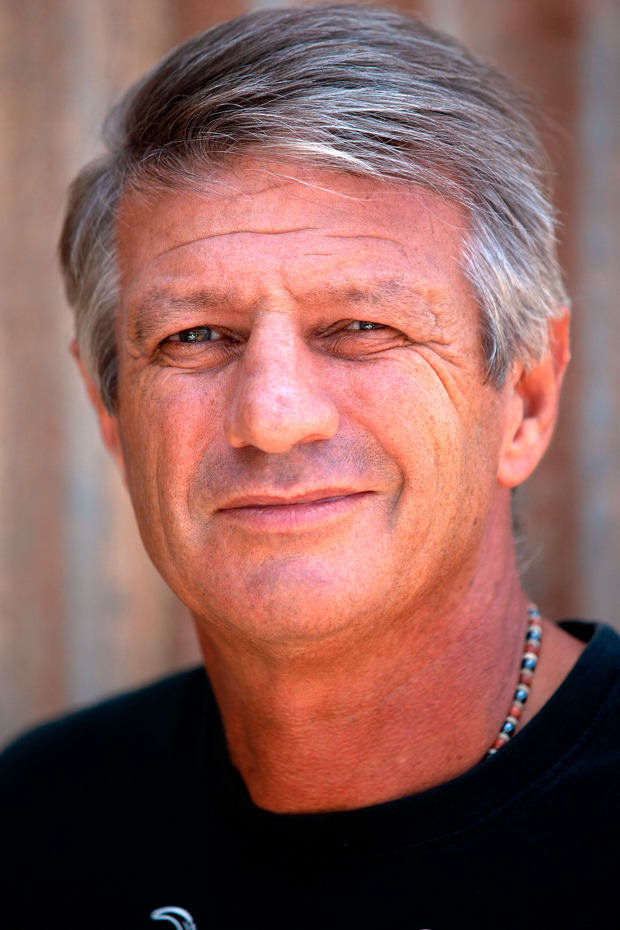 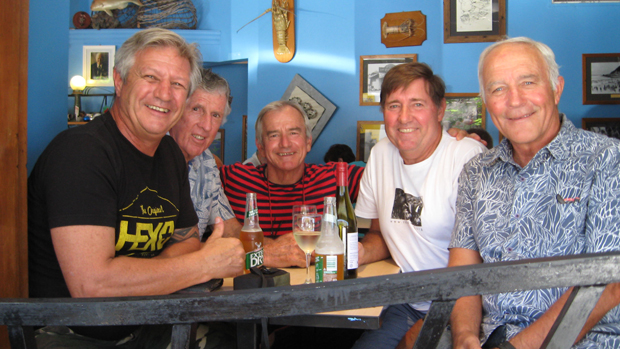 From Bill Scholer: On November 1, 2022, my greatly talented and faithful friend, Kym Thompson, departed to an unknown world. Kym left suddenly and tragically. Motorcycles and Thailand traffic are not compatible, as Kym’s tragedy attests.

Kym’s departure has left many hearts broken and heavy with sorrow and regret, mine certainly included. Along with Kym’s families, the loving children that he fathered and cherished, his many personal and business friends will all almost certainly be affected with deep sorrow and a long-lasting emptiness in that corner of their heart where Kym was fondly kept. I know that, because Kym was a passionate and sensitive man with an admirable Buddhist philosophy. He was an instantly lovable character.

It is not difficult to rationalise Kym’s demise as a genuine tragedy and a severe loss not only to his family, friends and fans but to both the sport of Surfing and the world-wide industry of Surfing.  Kym Thompson easily qualifies as a bone fide Icon/Legend of both the international Surfing world and the world-wide Surfboard industry.

Kym Thompson was a great (goofy foot) surfer, great shaper, Bells Beach icon, creator of the famous WaterCooled surfboard and surf product brand and, since 1997, the dynamic technical wizard behind Thailand surfboard manufacturer Cobra International. The Cobra company is currently and has always been the largest water sports/surf craft manufacturing facility in the world. Prior to his move to Cobra, Kym was shaping for Rip Curl, Klemm-Bell and Pat Morgan in Torquay.

In order to understand Kym’s early surfing ability and board building expertise, Kym’s close friend, Rod Brooks, provided the following summary quote. “In the early 70s after winning the South Australian Open Surfing titles and learning to shape and build boards with John Arnold (Adelaide) and Burfords (Adelaide, prior to Don Burford moving to Currumbin) Kym moved to Torquay and Bells Beach. At first, he shaped around town for Pat Morgan, Rip Curl and Klemm Bell all at the same time, all as a little-known shaper. I was a partner in Klemm-Bell and manager at that time, we were having problems with shapers pissing off surfing or having a bigger party program and not turning up to shape regularly. So, I offered Kym to shape at Klemm Bell and we guaranteed him 20 boards a week minimum. So, he was making more money per week than me or Klemm or anyone else making surfboards in Torquay.

"In 2020 on a boat trip with Greeny in the Mentawais, Kym actually thanked me for this arrangement about which I had forgotten. He said it really set him up financially and allowed him to go into WaterCooled with Maurice Cole a few years later. In those early years, Kym was a very hard worker and surfboard builder, at a time when lots of guys were avoiding hard work. Also, Kym placed 2nd in a Victorian Open Surfing Title at Bells Beach. Others years he would have been State Champ but the format was changed that year. Anyway, I could go on and on about Kym. Cheers Rod.”

Much as a result of Kym’s surfboard manufacturing expertise and his application of cutting-edge materials and innovative manufacturing techniques, Cobra quickly grew to being a highly respected, world-class producer of fine surfboards built to exceptionally high-level “ISO whatever” quality control standards. At Cobra, if a surfboard was anything less than perfect, it was flatly rejected by Kym’s quality-control criteria, mercilessly crushed and disposed of.

Cobra is where all our super, epoxy sandwich/EPS Tuflite/Surftech boards including Takayama, Al Merrick, Tollhurst et al were developed.  Anyone would be most surprised, to say the least, at the extent of the well-known Australian fibreglass/PU and epoxy/PS board brands that are/were produced under Kym’s control.  World famous surfers and “big brand names” came to Cobra to meet Kym. He was trusted as a fine surfer and as a master-shaper to produce exactly what the customer wanted.

All I can say is Kym’s surfboard operation at Cobra had to be witnessed to be believed. So well set up for volume production. So slick! The Thais are very capable and competent workers and Kym trained them up to a high level of manufacturing responsibility. With Kym’s influence, Cobra’s corporate and product philosophy extended deeply into the trial and use of innovative products, technologies and materials and above all, in every phase, quality control ruled. In those relatively early days in Australia, surfboard production in Asia was equated to “pop outs” and surfboards made anywhere outside an Australian shaping and/or glassing room were derided as low-quality, “cheap pop outs”.

Of course, Kym was aware of this trepidation and misconception, as he understood the mentality promoting this protective attitude, which was mostly expressed and promulgated by “backyarders, some custom shapers and much of the protective, surfboard industry”. The surfboard quality produced by Cobra under Kym’s close tutelage and scrutiny defied all those reservations and accusations, with millimetre-perfect symmetry, exacting rail-line profiling, strategic rocker setting and beautiful finish. In fact, in the case of Cobra-manufactured surfboards, Kym Thompson made the “Made in Thailand” sticker become a badge of honour.

He also advanced the extraordinary vacuum technology principles at Cobra that allowed selected timber veneer to vacuum-form snugly around a surfboard blank, resulting in a most stunningly authentic “timber finish”. Kym was the perfect candidate to spend the last, over 25 years of his working life in Thailand. He loved the unique Cobra opportunity that he jumped at to make some of the very finest surfboards in the world, including his own WaterCooled brand. He loved the culture, he loved the people, Kym loved his family, and loved his management role in helping to shape Cobra into the international quality standard for surfboard production.

Kym shaped me some beautiful boards in Thailand. I just gave him a length; he did the rest. Thanks mate!

P.S. - Kym has some very close friends here on the Gold Coast so we are organising a “Paddle Out” and scattering of some of Kym’s ashes at Rainbow Bay on Sunday 8am. January 29, 2023. Everyone is welcome to join us to celebrate Kym.