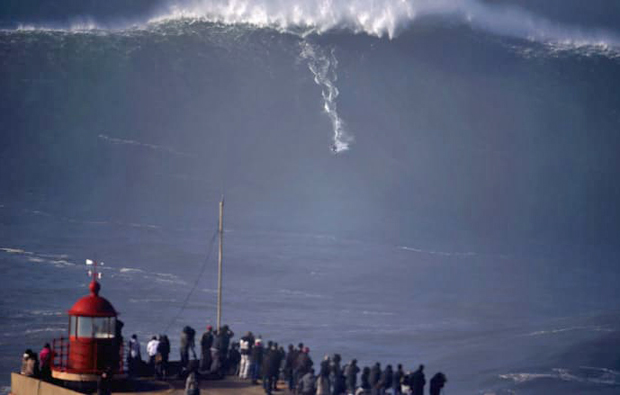 Garret McNamara and his longboard after a paddle session at Praia do Norte beach in Nazare, Portugal.

Town once feared 10-storey waves - but then surfers showed up

Nazare: At the market in this ancient fishing village, Portuguese pensioners shop for their fruit and vegetables. Retired fishermen chat over coffee. And a record-breaking American surfer sips on a cucumber and celery smoothie. Garrett McNamara, a 52-year-old from Hawaii, until recently held the world record for the highest wave ever surfed. For most of his life, he had never visited Europe and had to take some time to find Portugal on a map.

"I never envisaged this," says McNamara, who tends to surf in the Pacific Ocean. "Portugal was never a destination."

For centuries, Nazare has been a traditional seaside town, where fishermen taught their children to avoid the huge waves that crash against the nearby cliffs. But over the past eight years, those same waves have turned the place into an unlikely draw for extreme surfers like McNamara, their fans and the global companies that sponsor the athletes.

Tall as a 10-storey building, the waves are caused by a submarine canyon — five kilometres deep, and 170 kilometres long — that abruptly ends just before the town's shoreline.

When McNamara first saw the giant walls of water in 2010, "it was like finding the Holy Grail," he says. "I'd found the elusive wave."

Up in the town's 17th-century fort, tourists now ogle surfboards in the same rooms where the marine police used to store confiscated fishing nets. Out in the bay, professional drivers are test-driving new watercrafts, metres from where villagers dry fish on the beach. In the port, surfers rent warehouses next to the quays where fishermen unload their catch.

"It's a very interesting mixture of history and tradition — and a surfing community," says Maya Gabeira, who holds the record for the biggest wave ever surfed by a female surfer, achieved at Nazare last January, and who has had a base in the town since 2015. "We're not the predominant thing here."

The dynamic constitutes a sea change for both the big-wave surfing world, whose members have historically gravitated toward the surf hubs of Hawaii and California, and the 10,000 villagers of Nazare, who were used to having the place to themselves over the winter.

The story of how it happened depends on who is telling it.

For Dino Casimiro, a local sports teacher, the tale begins in 2002, when he was appointed by the former mayor to help popularise water sports among locals, and publicise Nazare's waves among foreigners.

For Jorge Barroso, the former mayor, the turning point was in 2007, when he gave Casimiro permission to hold a water sports competition off the most northerly — and the most deadly — of the town's two beaches.

And for the town's current mayor, Walter Chicharro, the story starts soon after his election in 2013, when he pumped more money into publicising and professionalising the town's surfing scene.

But the watershed moment really came in 2010, when McNamara finally took up a five-year-old invitation from Casimiro to come to Nazare, and try out the waves that break off the town's north beach.

For all concerned, these were uncharted waters — literally and metaphorically. Not only had McNamara never visited Europe, but the villagers, many of whom knew someone who had died at sea, had never considered their tallest waves swimmable, let alone surfable.

Bodyboarders like Casimiro had long tried their luck. But surfing — particularly in the winter — was thought impossible.

"I thought he was crazy," says Celeste Botelho, a restaurant owner who gave subsidised meals to McNamara and his team throughout the 2010 winter. "We thought of that beach as a wild beach."

Botelho even avoided growing too attached to McNamara and his family: She feared he might soon drown.

McNamara was meticulous in his preparation, spending that winter studying the rhythm of the swell and the contours of the seabed, sometimes with the help of the Portuguese navy.

A year later, in 2011, McNamara was ready to surf Nazare's waves at somewhere near their peak. That November, he conquered a 23-metre wave — turning McNamara into a world-record holder, and Nazare into a name recognized throughout the surfing world.

The tourists started to turn up in meaningful numbers in late 2012, eager to see the world's tallest waves. Previously, the town's hotels and restaurants emptied out in September. Now they had business year-round.

From surf schools to souvenir shops, surfing is now big business in Nazare.

When Paulo Peixe founded the Nazare Surf School, shortly before McNamara broke the world record, surfers were seen as "guys who don't like to work," Peixe says. "Now it's different. There's the idea that surfing is good."

Botelho, initially so fearful of McNamara's project, has now named her menu after him. The town has played host to a surf-themed film festival, while the World Surf League, professional surfing's governing body, runs regular competitions here.

But there are tensions. The number of outsiders buying property in Nazare is still relatively low, but property prices and rental rates are rising, as they are in the rest of the country.

That bodes well for one generation of property-owning Nazarenes, but some fear that the next generation will eventually have to move from the town center to find affordable housing.

"The bad part," says Peixe, the surf school director, "is that we're probably going to lose the idea that we're a traditional village."