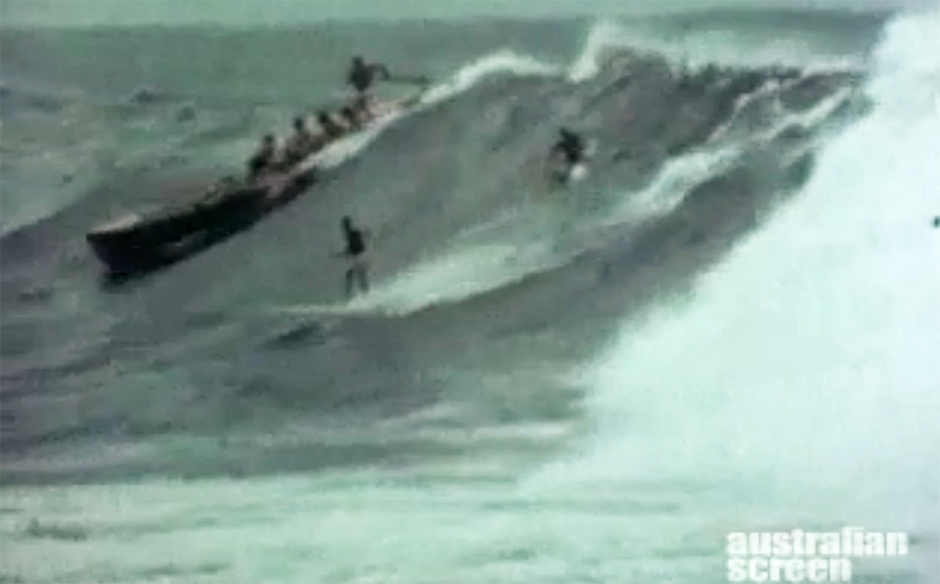 Time Capsule: The Nat, Bob and George at Noosa section from "High On a Cool Wave"

On a big day at Fairy Bower near Manly in March 1966, the bravest surfers gather to take advantage of a big autumn swell. A lone surfboat crew dares to take off on a huge wave, beside the surfers. Further north and later in the year, at Noosa Heads in Queensland, a trio of surfing pioneers is working on new boards and new ways of riding them. George Greenough, Bob McTavish and Nat Young are about to change surfing in Australia.

FROM THE CURATOR’S NOTES:

The surf films of the 1950s and 1960s took their stylistic cue partly from American travelogues, in which the narration was meant to be both informative and entertaining. The voice we hear on this clip is that of the director, Bob Evans, a Sydney surfer who had been making surf films since the late 1950s. We can infer from the way he explains the location and the geography of the Australian east coast that he was expecting this film to be shown in the USA. Indeed, High on a Cool Wave appears to be directly targeted at American surfers. Evans tries hard to convince both Australian audiences, and those overseas, that things are changing quickly in Australia.

This footage comes from July 1966, shortly before Nat Young went to San Diego, California, to compete in the World Championships. His win in that contest established him as a major influence on world surfing, and it was partly his style that was different. The commentary talks about how these three surfers were changing that style, but there was a lot more surfboard development to come. McTavish says that this footage represents the apex of what could be done on a traditional longboard. Everything would soon change, as he started to make his boards shorter and shorter, in an attempt to ‘go vertical’.

One of the interesting things about this clip is the way the music changes, as the location changes to Noosa Heads. The storm sequence in Sydney has more driving rock’n'roll, but switches to cool jazz for the small waves. Jazz had been considered the coolest music in some circles since the late 1950s, but that was about to change, along with everything else. Albie Thoms, in his book Surfmovies: The History of the Surf Film in Australia, says that part of the soundtrack was done by the Sydney blues band The Id.

The narration was written by photographer-journalist Rennie Ellis, who was Evans’s man in Victoria, roadshowing his films. Evans did most of the shooting himself.