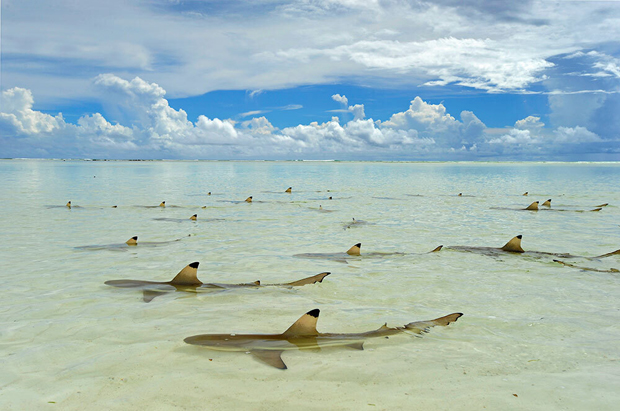 (top) Harp seals in the Gulf of St. Lawrence, and (above) gentoo and chinstrap penguins on an ice floe near Danko Island in Antarctica. Photos: Jennifer Hayes & David Doubilet 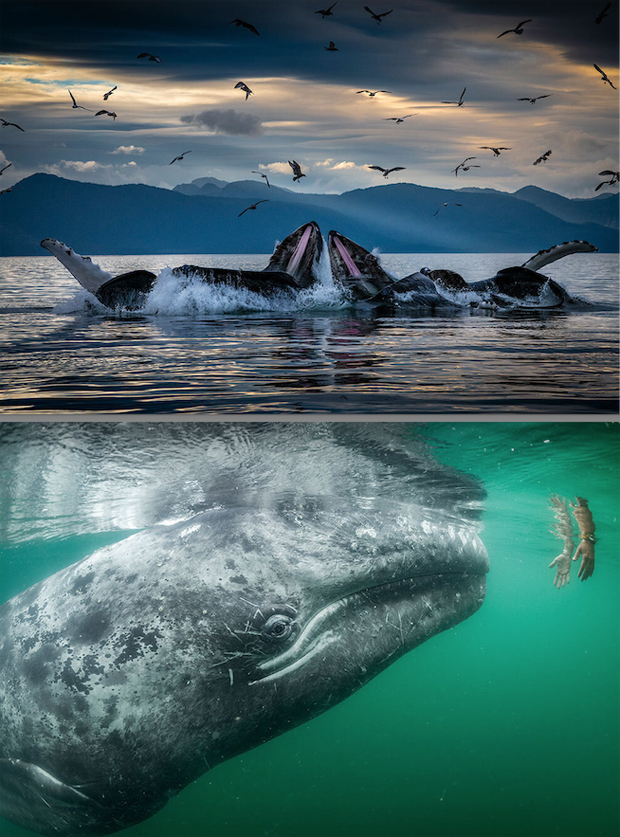 (top) Humpback whales bubble-net feeding in the waters off Alaska. (above) A tourist on a boat off Baja California’s Laguna San Ignacio reaches into the bay in the hope of petting a gray whale. Photo: Brian Sherry & Tom Peschak 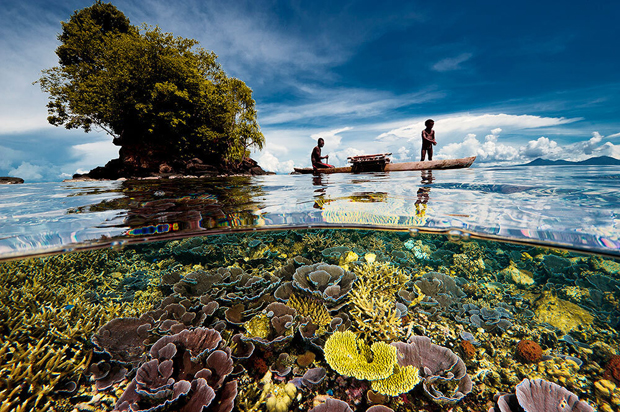 Two worlds: above and below the sea, Papua New Guinea. Photo: David Doubilet

“Sharks are the least of it,” says longtime National Geographic photo editor Kathy Moran when asked about the challenges of photographing underwater. “In fact, you hope for sharks if you are making photos!“

And Kathy should know. For more than four decades, she has been collaborating with the best underwater photographers in the business: National Geographic Explorers Thomas Peschak and Emmy winner Brian Skerry. Also among them: duo Jen Hayes and her husband, David Doubilet, whose National Geographic career has spanned more than 50 years. Both Tom and David have books on underwater photography coming out.

But story comes first. “It is easy to dazzle with a set of underwater photos,” Kathy says, but the most important thing is to keep narrative in mind. “David and Jen, Brian, and Tom are photojournalists. This is what sets them apart."

Tom brings his signature research skills to every story that he proposes. The same rigor goes into his fieldwork. “He literally never got out of the water,” Kathy observed from one assignment. “It was fascinating and exhausting to watch him work.”

David and Jen aren’t interested in making beautiful photos. They look at biology and coral decline. They document how people fit into ecosystems and what co-existence looks like, as in David’s photo (above) from Papua New Guinea. “Together they bring science and art to every story,” Kathy says. A group of such photos, which split the perspective above and below the surface, form the backbone of his new collection.

Brian, whose Secrets of the Whales documentary series just won a Primetime Emmy, goes after the stories that others run from. He did not pitch a story on humpback whales; instead, he pitched a story on whale culture – “something hard to quantify and almost impossible to photograph,” says Kathy. “He chases ghosts and ideas.”

With so much of the ocean unexplored, what picture remains out of reach? Tom is chasing “an underwater mural of South African kelp forests, showing the verticality and density of the ecosystem,” Kathy tells me. And David “never stops scheming on the best way to document a reef in its totality.“

She continues: “Those are the two Holy Grails.”

“TWO WORLDS: ABOVE AND BELOW THE SEA” AVAILABLE HERE

“SECRETS OF THE WHALES” AVAILABLE HERE