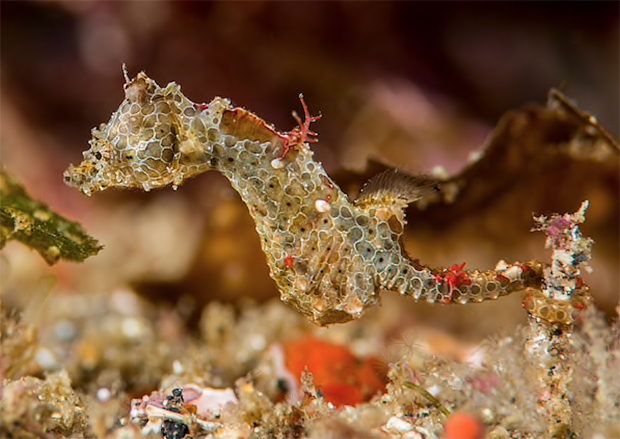 This newly described species of pygmy seahorse (Hippocampus japapigu) blends into the algae-covered rocks where it lives. The "Japan pig" is about the size of a grain of rice, and is luckily not rare. Photos: Richard Smith 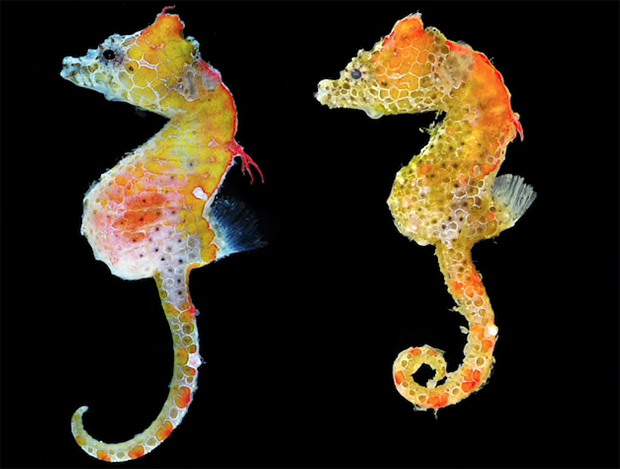 From the Wonders of the Sea file: Meet the Japan pig, a newfound species of pygmy seahorse discovered in Japan.

Only the size of a grain of rice, these colourful creatures inhabit shallow waters and blend in well with the algae-covered rocks where they live.

They’re easy to overlook, as their color makes them look like little bits of floating seaweed. Their coloration is “very special,” says Kevin Conway, associate professor and curator of fishes at Texas A&M University. “It's like a seahorse wearing a paisley pattern.”

Scientists have named the creature Hippocampus japapigu - using the Latin for “Japan pig,” the name adopted for it by divers who have seen it in southeastern Japan.

It earned that appellation “because to the locals, it resembles a tiny baby pig,” says Graham Short, an ichthyologist at the California Academy of Sciences and lead author of a study describing the new species in the journal ZooKeys.

Although the tiny seahorses have been observed by divers for several years, it wasn’t until Short and colleagues began to study them that the researchers realized they hadn’t been described before, and were unique.

The Japan pig is one of about seven known species of pygmy seahorses, which, as the name implies, are much smaller than other seahorses.

The new species differs in several respects from its cousins, for example possessing an odd ridge on its upper back made of triangular struts of bone. The purpose of the ridge is unclear, though it could have evolved as a way to attract a mate, a process known as sexual selection.

When Short first saw these bones on a CT scan, he “did a double-take,” he says.

Like other pygmy seahorses, it has a wing-like structure on its back, the function of which is unclear. But unlike the other pygmies, which have two pairs, it only has one.

Besides being found in southeastern Japan, they also live near Hachijo-jima Island, a remote area more than 150 miles from Tokyo.

Luckily, “they are not rare,” Short notes.

The Japan pig’s habitat is a bit unusual for a seahorse. The water gets quite cold in some of these regions in winter, and warm in the summer, and most seahorses cannot tolerate such temperature swings. Other pygmy seahorses also prefer significantly deeper water.

Besides being smaller than regular seahorses, pygmies also have only one gill slit on their upper back, instead of two below each side of the head, like larger seahorses.

“It’s like having a nose on the back of your neck,” Short says.

And they are small enough “to fit two or three on the nail of my pinkie,” he adds.

Their diet consists of plankton, such as copepods and other small crustaceans. As for their behavior, “they seem to be quite active, even playful,” Short notes.

But that’s about all that scientists can say about the creatures. “Really almost nothing is known about pygmy seahorses in general.”

The benefits of being so small include evading recognition by predators. But they have also escaped excessive attention by humans.

Populations of larger seahorses are being depleted in many areas of the world by people who seek them for use in traditional Chinese medicine and the aquarium trade, Short says.

“But this will never be an issue for pygmy seahorses, because they are just too hard to find,” Short says.