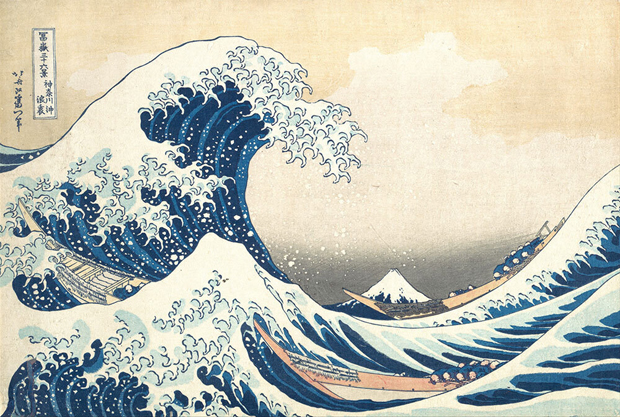 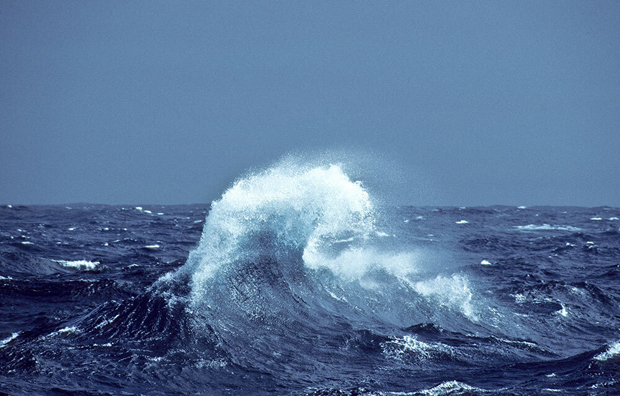 Proof: A photograph of a breaking rogue wave in the Southern Ocean. The shape is remarkably similar to that depicted in the iconic woodblock print (at top) by Katsushika Hokusai.

A monitoring buoy operated by Canadian research company MarineLabs is seen approximately three miles from the site off the coast of British Columbia where another MarineLabs sensor buoy measured an extreme rogue wave in 2020. PHOTO: MARY & ED GOSKI

“The Gargantuan Rogue Wave” of the open ocean

“They resemble a wall of water rising out of the sea,” Ally Hirschlag writes for Nat Geo.

For centuries, rogue waves were dismissed as maritime tales, but now the rare phenomena have been confirmed - and mathematicians are working on predicting these sudden, towering waves. How? By combining real-world data collected from monitoring buoys with statistical models.

In 1826 Captain Jules Dumont d’Urville, a French scientist and naval officer, was caught in a turbulent storm while crossing the Indian Ocean. He watched as a wall of water rose some 100 feet above his ship, the Astrolabe. It was one of several waves more than 80 feet tall that he recorded during the wild storm. One of his crew was lost to the sea. Yet after Dumont d’Urville made it back to land, his story, backed by three witnesses, seemed so outlandish that it was dismissed as fantasy.

Scientists at the time believed waves could only reach about 30 feet tall, so the handful of 19th century reports of massive waves rising in the open ocean were largely written off as maritime myths. Only later would scientists realize that the accounts were rare because many mariners who experienced these so-called rogue waves didn't survive to tell the tale.

Today a rogue wave is defined as one that is more than twice as tall as the waves around it. These giant swells can appear suddenly and seemingly out of nowhere. With steep sides and a deep trough below, they resemble a wall of water rising out of the sea. They can occur during storms with choppy seas but have also been reported in calm waters, which is one reason they’re so difficult to predict.

Scientists have recognized rogue waves as real phenomena since the mid-1990s—but keeping sea travelers safe from them is still a major challenge. Though they are relatively rare, rogue waves can cause severe damage and loss of life if they hit a ship in the open sea. In the vastness of the ocean, the interaction of the many forces leading to rogue waves can be difficult to untangle. More recently, mathematicians have been combining real-world data collected from monitoring buoys with statistical models to understand what causes these gargantuan waves to form. Their work offers hope that we may even be able to predict rogue waves before they strike.

How waves can grow

As shipbuilding technologies advanced in the 20th century, the number of surviving witnesses to rogue waves grew. In April 1966 an Italian cruise ship called the Michelangelo met with an 80-foot wave that rose high above the storm-driven waves around it. The ship sustained significant damage and three people were drowned, but most who were on board made it safely back to shore.

The crew aboard the MS München, a German container ship, weren’t so lucky. In December 1978 the ship left the German port city of Bremerhaven for Savannah, Georgia, packed with steel cargo and a crew of 28. After reporting bad weather and sending out distress signals in the early morning hours of December 13, the ship and everyone on it disappeared. A lifeboat that had been attached to the ship about 65 feet above the water was recovered, but it appeared to have been ripped from its post, likely by a towering wave at least that high.

Scientific doubts about these mysterious, giant waves were not completely dispelled until 1995, when a rogue wave hit the Draupner oil rig, a natural gas platform in the North Sea off the coast of Norway. The wave’s peak, measured by a laser detector on the rig’s scaffolding, rose 85 feet above the surface.

Scientists have since figured out that unlike tsunamis, which are large waves produced by a sudden displacement of water from an event such as an earthquake or landslide, rogue waves form due to a chance combination of wave movements through the ocean.

One reason for the uncertainty is that rogue waves are rare. Even now, there’s a dearth of quality tracking data.

“Generally ocean rogue waves are measured from platform measurements or buoys, which record time-measurements at a specific location without any knowledge of what happened before or will happen further,” says Amin Chabchoub, a wave physicist at the University of Sydney in Australia. A 2019 study led by Chabchoub evaluated several rogue wave observations and models, and the team concluded that the inciting rogue wave mechanism can change depending on the varying factors in the sea at a given time, known as the sea state.