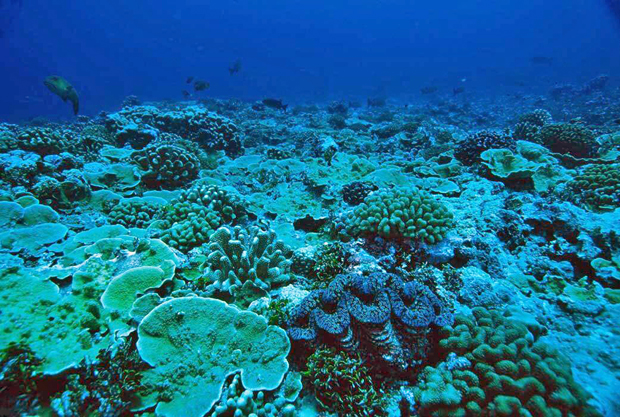 The ceaseless rumble is nothing new, but observing it from the ocean floor could help future research. Pic: Paul Nicklen, Nat Geo

Our blue ball . . . and its humming ocean waves

The Earth is humming. Caused by ocean waves - here's what it means.

From Nat Geo: Our blue planet spins suspended in outer space - and it hums, too. The ceaseless rumble has fascinated scientists for decades. But while science hasn't reached a consensus on where the signal is coming from, recent research could provide more answers – and help us better understand our planet's interior.

European researchers say the Earth's incessant hum originates from the bottom of the ocean. This study, published by researchers from the Paris Institute of Global Physics in the journal Geophysical Research Letters in November, gleans material from ocean-bottom seismometer stations, contrasting with previous data from vibration tools based on land.

"It's like taking a piano and slamming all the keys at the same time," says Spahr Webb of Columbia University's Earth Institute, who was not associated with the study. "Except they're not nice harmonics. They're oddball frequencies."

Humming by the Numbers

The planet's hum has tickled scientists' minds since 1959, but definitive research was not completed on the topic until 1998. This current paper is the first to document the rumble from the bottom of the ocean.

The researchers, spread out across earth science institutes in Paris, Stuttgart, and Oxford, U.K., combed through 11-months' worth of seismometer records covering a patch of more than 1,200 square miles on the Indian Ocean floor east of Madagascar. From that data, gathered from 2012 and 2013, they homed in on two stations with high quality data and sliced out any interfering sounds from loud waves and electronic glitches.

Behold: the native sound of the Earth.

The planet's vibration, or record of "free oscillations," hovers between 2.9 and 4.5 millihertz. That's a frequency 10,000 times lower than what humans can pick up; our hearing threshold starts around 20 hertz.

The researchers also found that the hum's amplitude, or loudness, did not vary over time. However, the sound change didn't depend on the seasons, which goes against other studies surveying a wider band of frequency, or pitch, than the one looked at in this study.

"To better understand where the signal comes from, we believe that observing oscillations from the ocean bottom can help," says co-author Martha Deen.

The Earth's hum is nothing new, Webb says. When looking at early seismometers, scientists saw the instrument's needles swing back and forth for a few seconds at a time, which they attributed to regular rumbles. They looked at ocean waves that produced pulses of pressure when traveling in opposite directions, and deduced that longer waves interacting with the bottom of the ocean are probably what's driving the Earth's hum.

"Fairly early on, people realized this was caused by ocean waves," Webb says. "As instruments have gotten better, we've realized the hum's going on all the time."

Since early observations, a number of studies have hypothesized that the Earth's free oscillations are a side-effect of the pounding of ocean waves. Other research suggests the hum could originate from atmospheric turbulence, or the wind motions around the globe, cued by storms. The current study says turbulence could account for part of the vibration, leading the rest to be fueled by ocean waves.

But not everyone agrees. "Turbulence in the atmosphere is moving very, very slowly. It's not energetic enough," says Webb of Columbia. "The hum is solely associated with ocean waves."

By studying the Earth's hum signal from ocean-bottom stations, scientists can map out a detailed landscape of the Earth's interior. Currently, they can only look at the inside of the planet during earthquakes, which limits studies to certain times and areas. And when looking at seismic activity from land monitors, researchers can't chart places far removed from islands and land masses. But the hum signal, droning and constant, can be detected across the world.

"That can be used to map the structure of the Earth," Webb says. "Getting data from new places is going to help."

A previous version of this story mentioned the hum's amplitude varied over time. The story has been updated with information from the researchers.