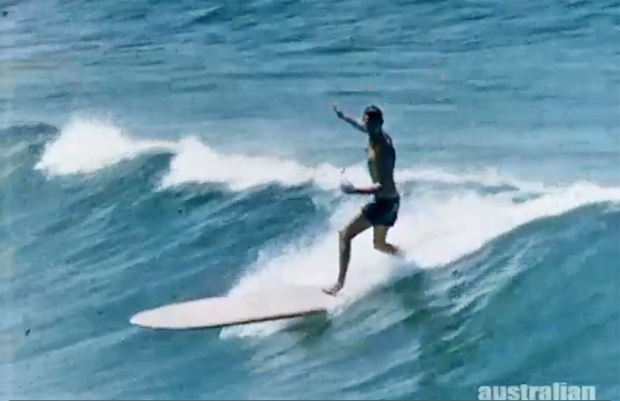 "THE YANKS" DOWN UNDER - original footage from the visit that changed Australian surfing forever.

1956 and the US and Hawaiians lifeguard teams bring their finned “Malibu" surfboards to Sydney and Torquay and start a revolution.
This is original newsreel footage showing Californians Mike Bright and Greg Noll and Hawaiian Tommy Zahn hotdogging the corner at Bondi and blowing minds in the process.

It’s from Service in the Sun (released in 1957), preserved on the National Film and Sound Archive of Australia. (Dug up from the deep web by PLB's archive detective Ian Lording.)
Below are the Clip Description and Curator’s Notes from the NFSA website.

On a beautiful day at Bondi, two members of the American surf lifesaving team and one from the Hawaiian team take to the water to show off the latest surfing techniques. They are in Australia for the 1956 Melbourne Olympics, where surf lifesaving is a demonstration sport. The Hawaiian and American surfers display technique far beyond anything then known in Australia. There is a brief cut to Hawaiian team manager and surfing legend Duke Kahanamoku, also visiting Australia for the Olympics, with the board he made during his first visit to Australia in late 1914.

This footage changed Australian surfing forever. Most young Australian surfers were still riding ‘toothpicks’, long laminated hollow boards that went straight into the beach. They were so heavy that almost no-one took them home, storing them instead in surf clubs. The Americans and Hawaiians arrived with boards that weighed a less punishing 10 kg, made from fibreglass and balsawood. They were shorter, lighter and far more manoeuvrable, and they had developed new ways to ride them.

Australian surfers had hardly seen American surfing at this stage, because the surf movie did not exist in Australia. Newsreels regularly covered surf carnivals and often featured Australian boardriding, but they rarely showed footage from overseas. Mike Zahn, the blonde Hawaiian in this clip, had a conversation during that visit with a young Queenscliff surfer, Bob Evans, about the surf movies being made in the US and Hawaii by Bud Browne and Bruce Brown. The Americans brought copies of some of those films with them, and Evans picked up the idea of making an Australian version.

The Australian surf movie was born out of this conversation, just as Australian surfing itself came largely from the visit of Duke Kahanamoku in 1914–15. His presence in this clip adds to the resonance. The Americans left their new boards behind when they went home, helping to start a new industry in copying their designs, just as Kahanamoku had done in 1915, when he gave the board we see here to brothers George and Monty Walker. Australian surfer Claude West donated that board to the Freshwater Surf Club in 1953, where it still resides. It was built at a Sydney timber yard by Kahanamoku (see The Popular Sport of Surfboarding, 1925).