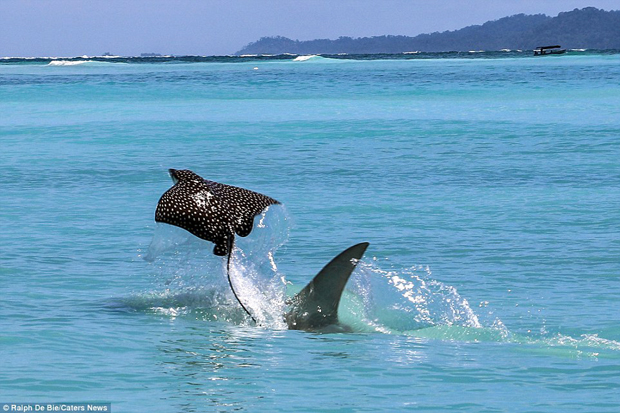 Incredible shot of a spotted eagle ray jumping to avoid a hammerhead shark - taken by Dutch surfer Ralph De Bie while on holiday in Panama recently. 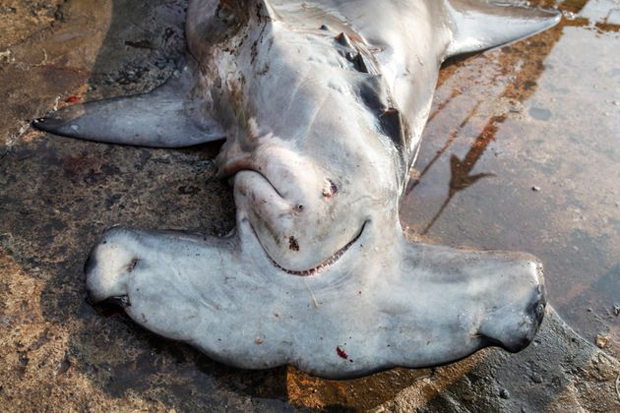 President Joe Biden has pledged to see the U.S. protect 30% of its land and ocean by 2030, which if accomplished would be a dramatic feat for conservationists.

While there seems to be no shortage of great whites in coastal waters in recent years, populations of sharks and rays have fallen dramatically worldwide since the 1970s a new study finds.

Populations of sharks and rays, the apex predators of the open ocean’s food web, have fallen by more than 70% since 1970, according to a troubling new study published Wednesday.

A team of researchers, led by Nathan Pacoureau, a postdoctoral fellow at Simon Fraser University in Vancouver, analyzed population data for the world’s 31 oceanic shark and ray species. The group relied on data from fisheries and scientific surveys taken around the globe, and ultimately found more than three-quarters of those species are now threatened with extinction or endangered.

The research is the first of its kind, providing firm data to back up scientists’ warning bells that the iconic creatures were disappearing from the seas.

The fall in shark and ray populations was primarily linked to human activity, namely overfishing of the creatures for their fins or body parts. As some of the ocean’s top predators, they’re also regularly snared by massive fishing operations that use baited hooks and longline methods to catch valuable tuna and other species.

Rather than be returned to the water, they’re often kept and sold.

“Oceanic sharks and rays are vital to the health of vast marine ecosystems, but because they are hidden beneath the ocean surface, it has been difficult to assess and monitor their status,” Pacoureau said in a press release. “Our study represents the first global synthesis of the state of these essential species at a time when countries should be addressing insufficient progress toward global sustainability goals. While we initially intended it as a useful report card, we now must hope it also serves as an urgent wake-up call.”

The figures are grim, but the authors added the true numbers are likely even bleaker. The New York Times notes that the authors had to rely on incomplete data that only began in 1970, but fishing fleets around the globe had begun to dramatically expand decades earlier, around the 1950s.

Sharks and rays can recover if protected, but they’ll take time to do so. The species are generally slow-growing and have few young, so they’re vulnerable to exploitation.

“There is a very small window to save these iconic creatures,” Pacoureau told the Times.

New Scientist added that the authors relied on all available data for each oceanic shark and ray species, citing the IUCN Red List of Threatened Species and the Living Planet Index. They found larger species of sharks were the first to begin falling, but the declines quickly spread to smaller species and those in more imperiled fisheries.

President Joe Biden has pledged to see the U.S. protect 30% of its land and ocean by 2030, which if accomplished would be a dramatic feat for conservationists. But sharks don’t just stay in one nation’s waters, meaning the research must be leveraged by an international coalition of nations to protect species worldwide.