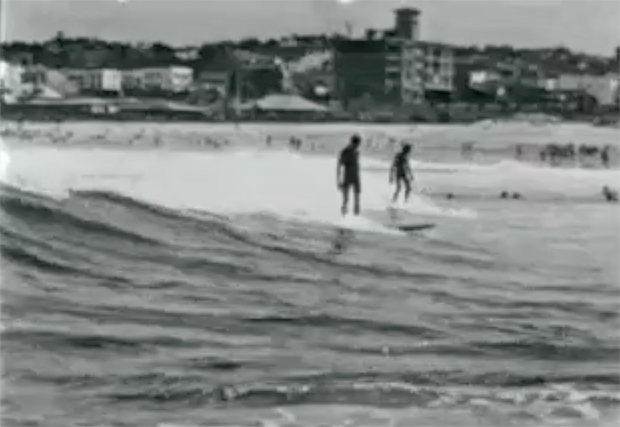 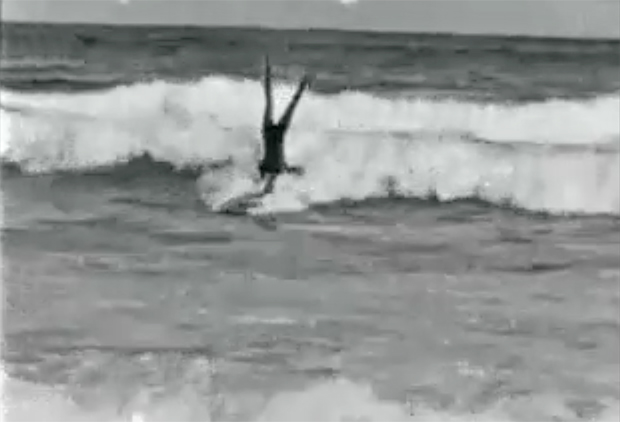 This is a segment from the newsreel The Spectator Magazine. Three surfboard riders take off on a full wave at the north end of Bondi Beach, riding large Hawaiian-style longboards. They are shown from the side, then filmed from the beach, riding straight in.

One man performs a handstand while riding. Another tries to ride his board from left to right along the wave. We see a total of about five surfers, in varying surf conditions. They ride amongst the swimmers, rather than separately, and appear to be playing up to the camera.

Note: This clip has been pillarboxed to preserve as much of the original image as possible.

Australians had only been allowed to swim in the ocean in daylight hours since 1903. Many drowned immediately after the lifting of the ban. The surf lifesaving clubs were established soon afterwards to cope with the large numbers of people who entered the water, even though they could not swim. These new clubs took a proscriptive attitude to the beach. Sunbathing was considered a form of loitering, and the earliest attempts to ride surfboards were instantly discouraged.

In his book Surfmovies: The History of the Surf Film in Australia (2000, Shore Thing Publishing, ISBN 0 9587420 3 0), Albie Thoms quotes the American travel writer Alexander Hume Ford: ‘I was arrested at Manly Beach before I had even stepped into the breakers. I had committed the unpardonable offence of sitting in the warm sand in my bathing suit.’

That was in 1908. The first surf carnival was held at Manly on 25 January 1908, and many of these carnivals were filmed by newsreel companies. Most of those silent films are now lost.

The lifesavers also policed what swimsuits could be worn. The men in these clips are wearing the approved style of the day, a single suit covering most of the torso. In the earliest years of public bathing after 1903, men and women were segregated on the beach, but some women became members of surf clubs and qualified for the bronze medallion, the accepted test of lifesaving skills.

In the 1920s, after the return of many men from the Great War, women were excluded from the surf clubs and from taking the bronze medallion.

By the time this film was made, the surf clubs were an exclusively male bastion.