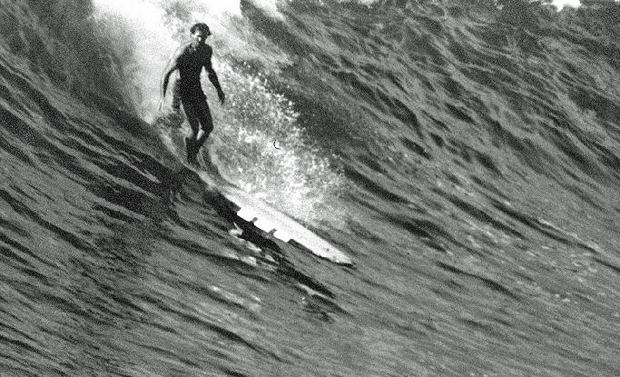 Blake with Duke – Tom is renowned as one of the most influential surfers in history, and a key figure in transforming surfing from a regional Hawaiian specialty to a internationally popular sport. The book, and the Duke’s cowboy boots – also on display at Noosa Longboards. "Athlete, inventor, and writer, Tom Blake is renowned as one of the most influential surfers in history."

Noosa Longboards has a most extraordinary collection of surf and pop culture ephemera, and among the latest additions are an original tapa cover edition of Tom Blake’s rare Hawaiian Surfboard book published in 1935 – and now in store for all to see and enjoy.

Over to the genial Michael and Ash Holmes from NLB for a little background:

This may be the only original tapa cover “Hawaiian Surfboard” by Tom Blake book in Australia. It’s the first, rarest, most valuable and most important book devoted to surfing – it’s that straight up, that simple, that significant. We’ve been trying to buy this copy for five years including of a trip to Hawaii to finalise a negotiation that didn’t come off.

If Duke Kahanamoku is the most famous surfer in history then maybe his close friend and protégé Tom Blake was the most important. From being the first to put a fin on a surfboard, to revolutionising surfboard design with the hollow board, to the invention of windsurfing, waterproof housing for cameras, to his exceptional water skills, time as a silent film actor and stuntman, to his alternative vegetarian lifestyle, and his quest for answers to the big questions in life, he was unique.

The Father of surfing Duke Kahanamoku was born on the shores of the cradle of surfing at Waikiki. We all know it’s difficult to measure his influence and achievements in surfing and surf culture against anything. To me he is simply a hero.

Personally owned Duke items are rarely available, particularly things he treasured. It would come as no surprise that Duke was also a skilled horseman and these boots were used. Duke and Nadine had no children and these boots as such were left to Duke‘s youngest brother Sarge. They ultimately left the family and were displayed for many years at the Moana Surfrider Hotel in Waikiki where there were much admired. I must have visited at least times over the years.

I never miss PLB NewsWire for the latest and when I saw a news piece on there saying both these items were coming up in a Bonhams LA auction I thought this was meant to be . . . right clicks at the right time with the right money and we got it done at the online auction!

Pleased to say they’re now on display for all to see and enjoy at Noosa Longboards (under lock and key) as a permanent gift to, and celebration of, surf culture . . . never to be sold. And I hope they both would be happy to see the boots and the book on the shores of the Pacific in Noosa as a celebration of surf culture.

To figure where we are going with surfing we need to know where we have been. Kids need to know about Tom Blake and the Duke  - their message is powerful and can transcend time and place. The aloha spirit, sharing the experience and enjoying with friends and strangers alike has more relevance than ever.

-  All the best, Michael