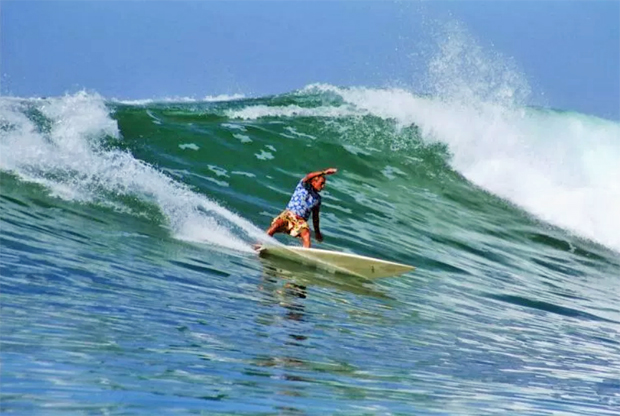 Mike Doyle in the 80s - from longboards to short. Photo courtesy of Doyle Surfboards 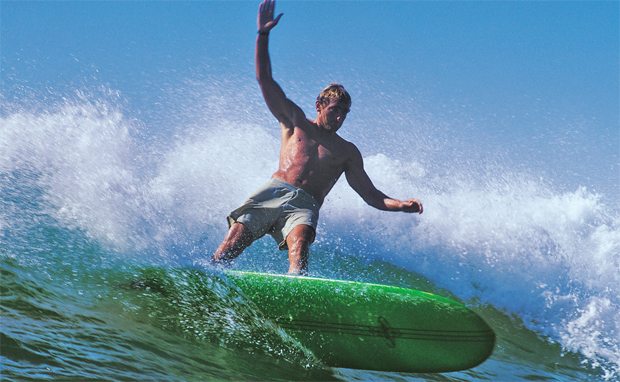 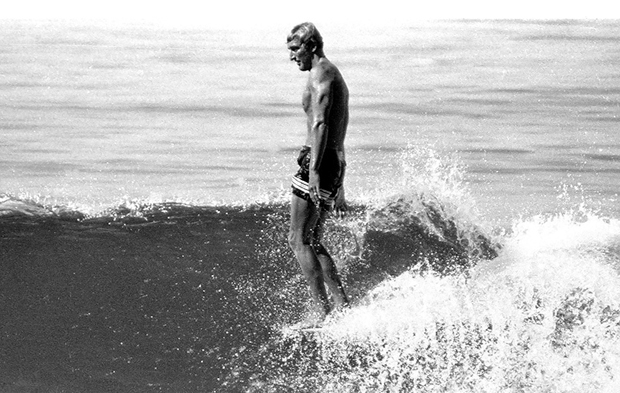 “This was from a shoot for a Time-Life Collier How to Surf book, taken a Del Mar in 1966. Mike Doyle was the main surfer for all the action.” Photo and comment by Tom Keck – from an article in PLB magazine, Volume 21 Number 1

And we must add, here at PLB we’ve always been chuffed and flattered that Mike followed our weekly PLB NewsWire, and from time to time he’d email us from his home in Mexico with comments about particular stories or with his opinion on the weekly Hot Shot. He was always generous with his praise, although sometimes not so much, and on one memorable occasion after we ran a photo of a longboarder doing a drop-wallet layback cut-back, he emailed, “Those cutback are just so bad, why would anyone do one of those? Why wouldn’t you look where you’re going? Watch Kelly Slater he always looks where he’s going. He knows where he’s headed. I hate those cutbacks!” We haven’t run a drop-wallet on the NewsWire since. R.I.P Mike Doyle

HERE’S HOW THE NEWS WAS REPORTED IN THE ORANGE COUNTY REGISTER:

“Probably no man alive has gone on more surf adventures than I have, yet I still haven’t had enough. If the conditions are right, I’ll walk away from anything to spend a day in the water with my friends.”

Mike Doyle, a waterman known for his big-wave prowess — one of the original “hot doggers” — died in his sleep early Tuesday morning, April 30. He was 78.

Doyle, who had been battling ALS, was a champion, inventor, boardmaker — an icon in the sport of surfing. Born in 1941, he grew up in Lawndale and caught his first wave at the Manhattan Beach Pier at age 13. He would soon become a pivotal figure in the South Bay and Malibu surf culture.

He spent his later years as an artist in Mexico, at San Jose del Cabo, where he died.

“It is a beautiful day here in San Jose, the waves are perfect and we know Mike is in Heaven with a smile on his face, surfing an endless wave,” an announcement on the Doyle Surfboards Facebook page reads, noting he was with his wife, Annie, when he passed.

Doyle, who was inducted into the Surfer’s Hall of Fame in Hermosa Beach in 2013, noted then that his “biggest memory was winning the Hermosa Beach annual surf festival contest and winning the tandem event and getting married – all in the same day.”

Competitively, Doyle was among the world’s best in the ’50s and ’60s, earning numerous surf championships, including the Duke Kahanamoku title and the West Coast Surfboard Championship.

He’s also a member of the Surfers’ Hall of Fame and Surfing Walk of Fame in Huntington Beach, inducted to both in 2003, and the International Surfboard Builders Hall of Fame, where he was inducted in 2009.

Doyle’s life as a surfer started in 1954, while he watched South Bay icons Dale Velzy, Bob Hogans and Greg Noll ride waves at the Manhattan Beach Pier, according to an article in the Daily Breeze. He worked as an apprentice to Velzy and Noll building balsa boards in 1959. He was also a Manhattan Beach lifeguard in 1960 and 1961.

According to the Surfing Heritage and Cultural Center in San Clemente, Doyle famously sold Kathy Kohner, aka “Gidget,” her first surfboard in 1956 and then worked as a stunt double in “Gidget” in 1959.

Boogie board inventor Tom Morey remembers seeing Doyle as a regular on the Malibu surf scene during the ’50s.

“When I first met him, he was already an accomplished rider in the South Bay area,” Morey, who lives in San Clemente, said recently.

He recalled Doyle’s big smile under a floppy hat his mother made — a popular character with a big stature and unique style in the surf.

“If there’s a show, Doyle’s in it … he’s one of the original hot-doggers,” said Morey, referring to a surfer’s showboating style on the waves.

The two surfers had something in common – a passion for invention.

Doyle, while working in Encinitas, used the boogie board material for the first soft-top board ever made, in 1970, the same boards that countless beginners use in waves today.

He also helped to create surf wax and a single ski, the Monoski, the seed for what would become the modern-day snowboard.

“To sum up Doyle in some kind of words, here’s a really fabulous guy, a real icon and definitely a champion,” Morey said. “I don’t know how many surf contests he’s won, but quite a few. And how many giant waves he’s ridden, but a lot. And how many innovations he’s had in the surfing world … revolutionizing, with his pals, the soft board is his deal and surf wax is a big deal.”

Doyle wasn’t in it for the riches, and in his book Morning Glass wrote about how people over the years would say “how rich I would be if only I’d had the good sense to invest in this or that project.”

“But I don’t look at it that way. Most people have to choose between money and freedom, and I made my choice a long time ago,” he wrote in an excerpt of the book published in the San Diego Reader.

He wrote that his heart still leaped when he saw a car full of surfers going down the highway with a rack of surfboards.

“Probably no man alive has gone on more surf adventures than I have, yet I still haven’t had enough,” wrote Doyle, who moved to Mexico in the ’80s to be an artist and to run a surf school. “If the conditions are right, I’ll walk away from anything to spend a day in the water with my friends.”

The surf is only good at certain times, and if you’re a serious surfer, you’ve designed your life around it, he noted.

“You have to make the time to be there when the surf is good.”