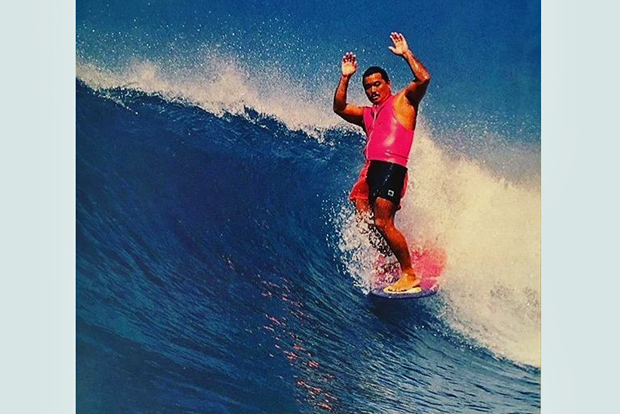 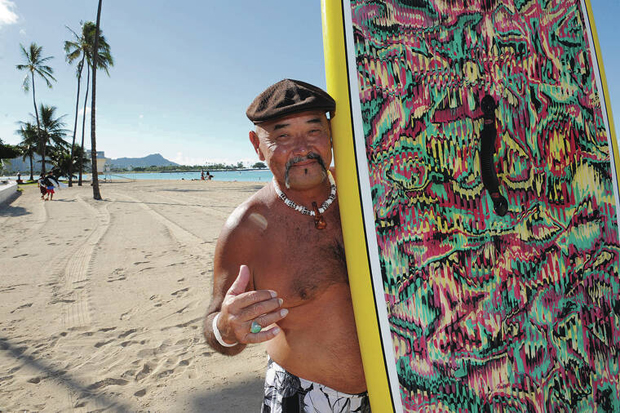 At his home beach, Waikiki. 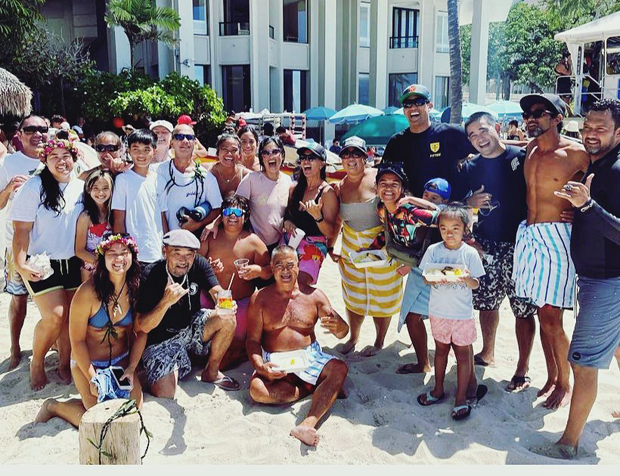 China, front and centre, where always seemed to be. 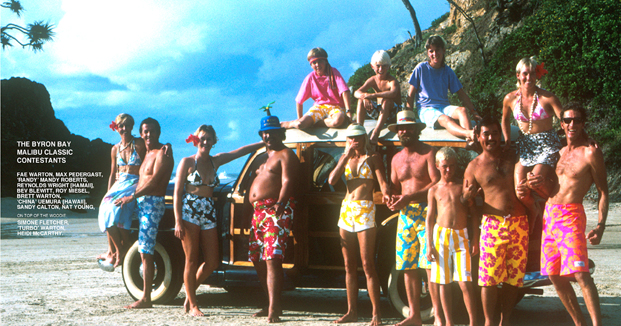 In Byron Bay, China on the right with Nat Young and Sandy Carlton – in a poster for Okanui. 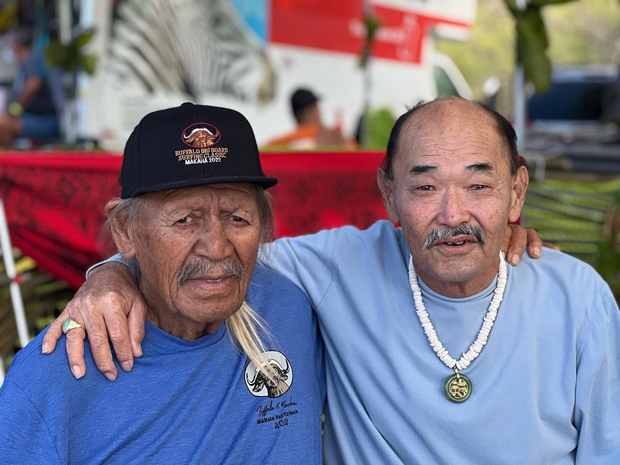 A recent shot with Buffalo Keaulana.

Hawaiian Waterman Hall of Famer, Roy “China” Eumera , organized kids comps and ran is own Longboard Classic for many years, and was a very fine surfer in his own right. An immensely likeable man, who had many friends in Australia following his trips Down Under, died on Friday 13th of January surrounded by family.

The following is a tribute as reported in Hawaii News via the local Star Advertiser:

The local ocean sports community is remembering Roy “China” Uemura, a Waikiki beachboy and the host of his own surf contests, who died Friday at 68.

Uemura’s family announced his death in an Instagram post on the China Uemura Surf Foundation’s page. According to the family post, he died at 4:30 p.m., surrounded by family and friends.

“It was one hell of a ride pops. All the stories of you in your wild days, and all the love you poured into the community. Over the last month it’s really put into perspective how many people you have impacted. Rest easy. We love you and so will all the people you’ve reached with your kindness. Mahalo everyone for your prayers, and kind messages. Dad (is) in a better place, no pain, no sadness, only happiness.”

According to Instagram posts from family members, Uemura slipped and fell at his home in November, sustaining injuries that required emergency surgery on his spine. His injuries required hospitalization and left him with minimal to no movement in his arms and legs.

Known as “Uncle China,” Uemura organized two surfing events for decades: the Wahine Surfing Classic and the Longboard Surfing Classic. Both annual surf competitions at Kuhio Beach in Waikiki draw hundreds of participants from throughout the world. Proceeds from the competitions have raised hundreds of thousands of dollars for nonprofits in Hawaii, including the American Diabetes Association and Kapiolani Medical Center’s Sex Abuse Treatment Center.

Hawaii Tourism Authority President and CEO John De Fries, said, “Our condolences and aloha are extended to the family of China Uemura. China embodied the true spirit of Waikiki and his legacy will live on for generations to come.”

Uemura was a 2013 Hawaii Waterman Hall of Fame inductee for his sustained accomplishments in surfing and stand-up paddleboarding, as well as the recognition that he brought to the sports. The event, which is part of Duke’s OceanFest, was established to “to create a lasting tribute to the Hawaiian Islands’ water sports legacy and honor the achievements of Hawaii’s standout watermen and waterwomen.”

Jim Fulton, president of Duke’s OceanFest, said the Hawaii Waterman Hall of Fame honors those who are recognized legends in their sports and have a legacy of giving back.

He said Uemura was a great partner to Duke’s OceanFest, where he surfed in the Outrigger Legends Surf Contest a number of times and assisted with the Matson Menehune Surf Fest.

“He honored Duke Kaha­namoku, but most importantly, he really took care of the kids,” Fulton said. “He was always nurturing them, teaching them, making sure they were safe.”

Fulton said in addition to his prowess with surfing, Uemura was an early advocate of the sport of stand-up paddling.

“I remember at one time he was overweight,” he said. “He discovered stand-up paddling, and it was one of those livesaving things that allowed him to surf again.”

Uemura had been challenged by health problems over the years. Around 2012 a blackout at one of his surfing contests led to open-heart surgery at The Queen’s Medical Center to get a valve replaced. That challenge forced him to take a break from teaching, but he went back as soon as he was able.

In his later years he offered free stand-up paddling lessons at Ala Moana Regional Park, where he loaned boards to students of all ages. He highly recommended stand-up paddling for seniors as a way of preserving good health.

Uemura told the Honolulu Star-Advertiser during a 2014 interview that he used teaching and being on the water as a means to heal. He also said that he found organizing events rewarding, as he had watched champs like Carissa Moore and Bethany Hamilton grow from groms to professionals.

The contests that Uemura organized and the lessons that he gave were his way of giving back to Hawaii’s youth and trying to ensure that they avoided making poor choices.

The Kaimuki High School graduate credited surfing with helping turn his life around. He told the Star­-Advertiser that he had used and dealt drugs in his younger years but had wanted to get clean, particularly after his daughter and son were born.

George Kam, ambassador of aloha at Quiksilver Inc. and chair of the Hawaii Tourism Authority, recalled that Uemura “had so much aloha.”

“What he did for the keiki was amazing,” Kam said. “What he gave back to the community and the youth — you see it in all the surfers today.”

Ching said Blears always spoke fondly about Uemura and during the past decade or so had surfed in some of his competitions.

“China was good about making sure there were competitions not just for competitive surfers, but for the kids to showcase their talents, too,” Ching said. “Hawaii is the birthplace of surfing, but so much happens outside of Hawaii. It’s always a challenge for local kids to gain exposure, especially if they can’t travel.”

Ching said Uemura was a well-recognized legend in Waikiki but that his status never went to his head.

“His presence carried weight,” he said. “But he was a pretty low-key, humble guy. He was very inviting and always nice to people. If you walked up to talk to him, he would make time for you, especially for the people that really needed it.”

Ching said he hopes that the competitions that Uemura started will continue, and said TS Restaurants, and Duke’s Waikiki, which always has been the home of the Waikiki beachboys, would be honored to assist the foundation and others that want to keep them going.