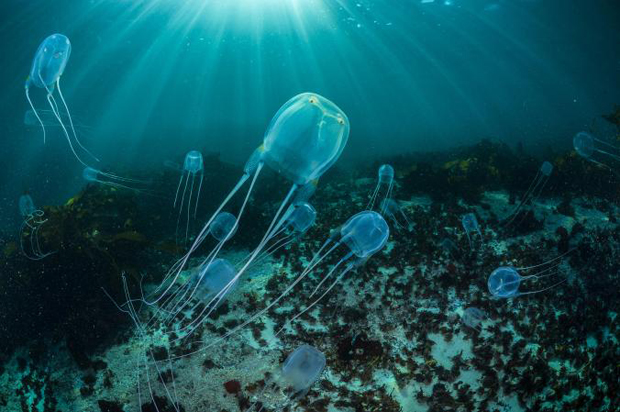 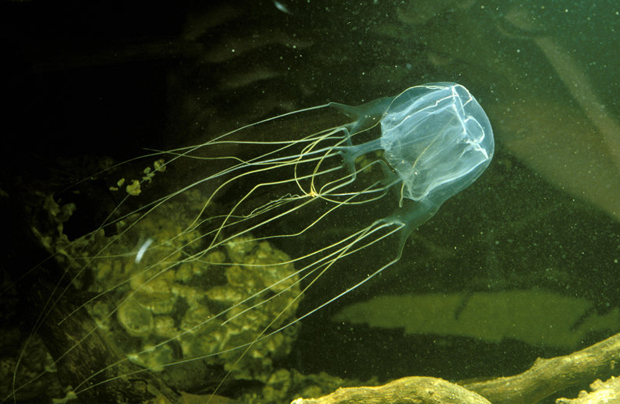 From the “Scary Ocean File”: The Australian box jellyfish is considered the most toxic animal on earth. They may not look dangerous, but the sting from one could be enough to send you to Davy Jones's locker.

Box jellyfish, named for their body shape, have tentacles covered in biological booby traps known as nematocysts - tiny darts loaded with poison. People and animals unfortunate enough to be injected with this poison may experience paralysis, cardiac arrest, and even death, all within a few minutes of being stung. But don’t choose the mountains over the ocean just yet. Of the 50 or so species of box jellyfish, also called sea wasps, only a few have venom that can be lethal to humans.

While box jellyfish are found in warm coastal waters around the world, the lethal varieties are found primarily in the Indo-Pacific region and northern Australia. This includes the Australian box jellyfish (Chironex fleckeri), considered the most venomous marine animal. Chironex fleckeriis the largest of the box jellyfish, with body sizes reaching up to one foot in diameter and thick, bootlace-like tentacles up to 10 feet long.

The box jellyfish has 24 eyes, which are dark brown and grouped into four clusters.

Box jellyfish have traits that set them apart from other jellyfish. Most notably, box jellyfish can swim—at maximum speeds approaching four knots—whereas most species of jellyfish float wherever the current takes them, with little control over their direction. Box jellyfish can also see. They have clusters of eyes on each side of the box. Some of these eyes are surprisingly sophisticated, with a lens and cornea, an iris that can contract in bright light, and a retina.

Their speed and vision leads some researchers to believe that box jellyfish actively hunt their prey, mainly shrimp and small fish. Incidentally, sea turtles are unaffected by their sting and regularly eat them.

VID: STUNG BY A BOX JELLYFISH

THEY SWIM AND HUNT & THEIR POPULATIONS ARE GROWING:

The biggest difference between the box jellies and other jellyfish is perhaps the most unsettling for swimmers. Rather than floating passively as they wait for lunch (small fish, prawns, invertebrates) to happen into their tendrils, box jellyfish actively hunt their meals, propelling themselves through the water by opening and shutting their bells (heads) like little umbrellas.

Thanks to warming oceans, overfishing, and oxygen-robbing fertilizers sluicing into waterways, populations of all jellyfish, including box jellies, are growing, says Angel Yanagihara, Ph.D., a marine biochemist with the University of Hawai’i at Manoa and one of the world’s foremost experts on the creatures.

“There is increasing evidence that some box jellyfish species are increasing in areas of the world’s oceans heavily impacted by humans,” says Anthony Richardson, Ph.D., a marine ecologist at the University of Queensland, Australia. This may be leading to a worldwide explosion that he’s described as a “jellyfish joy ride.”

“Over the past seven years, there have been increasing incidents of mass stings in coastal Florida, the Caribbean, Bonaire, Puerto Rico, and around many other islands,” Yanagihara says.

In short, she and other experts warn that the continuing rise in the numbers of these creatures—and the dearth of knowledge that still exists about many aspects of them—is a health and safety disaster in the making, especially considering the high volume of tourists that travel to these areas every year.