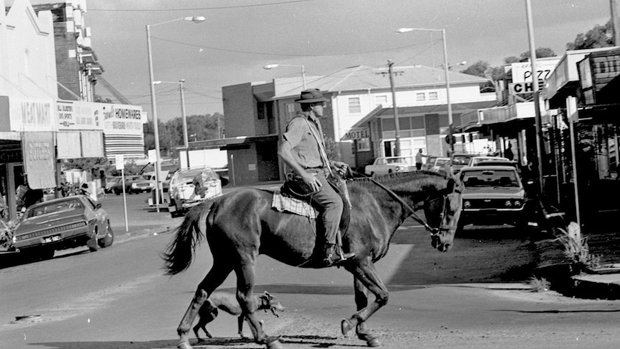 Byron Bay in 1976 was a long way from the tourism and traffic jams of today. (Supplied: Lee Pearce) 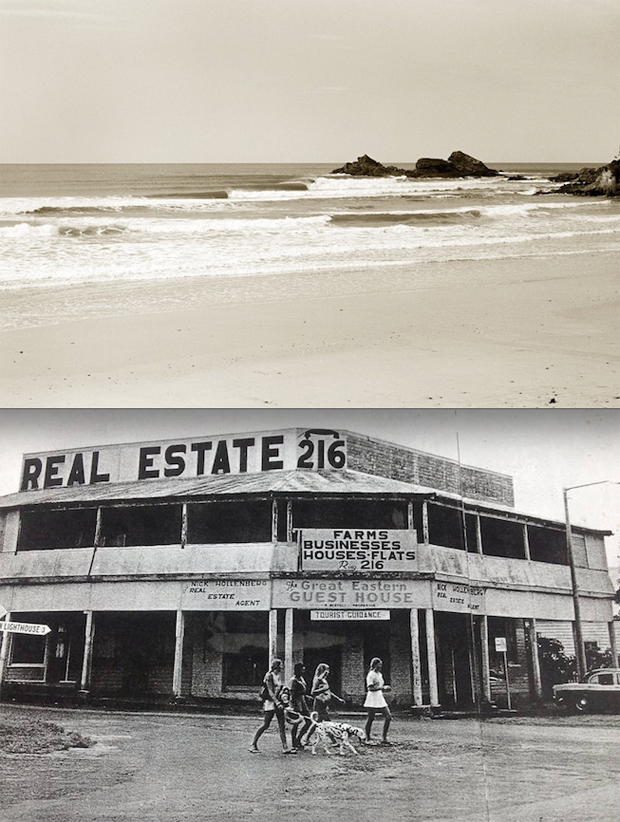 (top) The beach at Broken Head – (above) The main street of Byron Bay in the 1970s. (Supplied: Neverland) 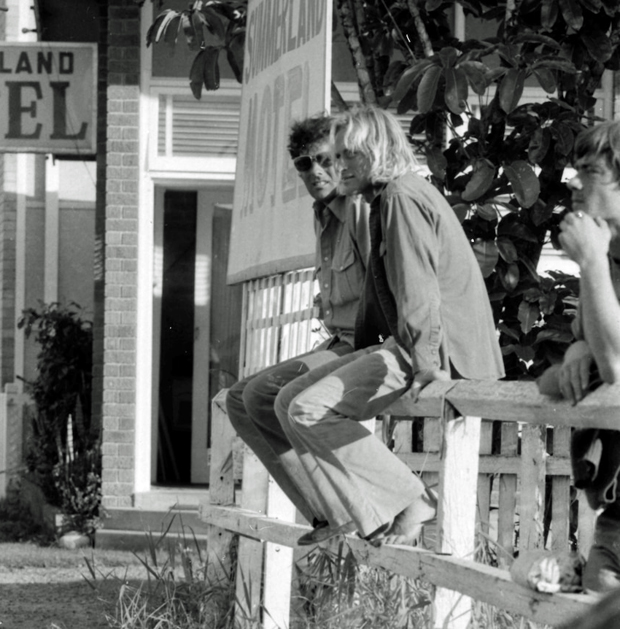 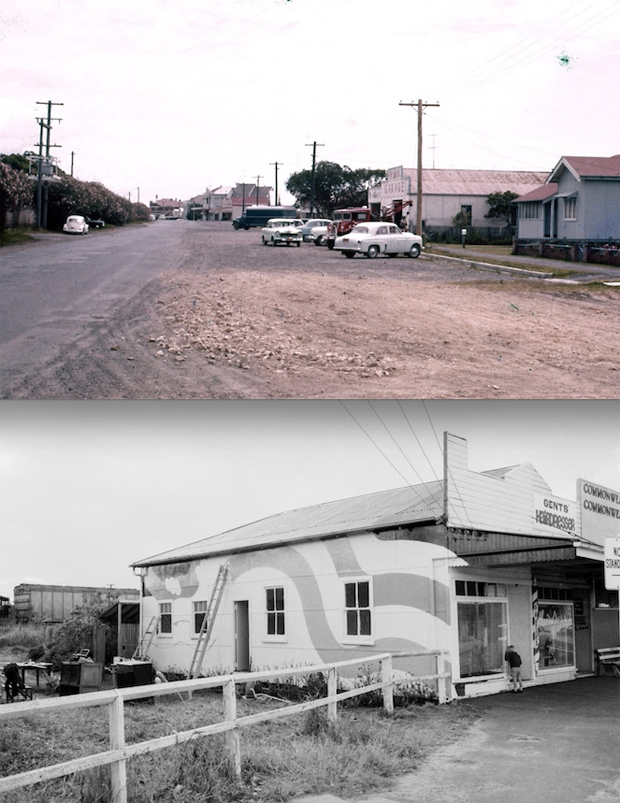 (top) Jonson Street in Byron Bay in the 1960s. (Supplied: Neverland) – (above) The Neverland shop, which Tricia Shantz's book was named after. (Supplied: Rusty Miller) 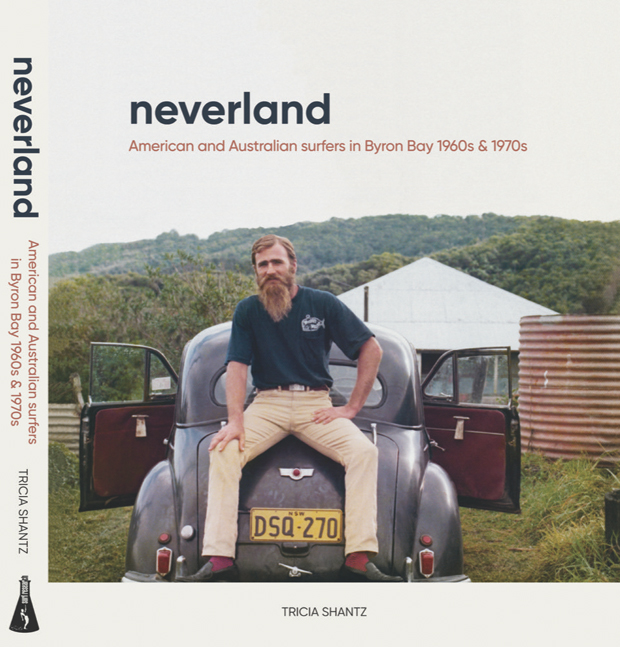 NEVERLAND IS AVAILABLE AT: rustymillersurf.com - OR via Instagram at: NeverlandthebookTriciaShantz - OR, email Tricia direct: triciashantz11@gmail.com

An accomplished journo, and a surfer, the following is Mark Bannerman insightful take on Neverland:

In 1982 the journalist Craig McGregor wrote about the delight of driving into Byron Bay.

"You climb up Highway 1 onto the hills that stare over the east coast … whip through the fast esses that snake along the ridge top … and suddenly there is Byron Bay… I've come to think of it as the most stunning seascape I've ever seen. See Naples and die; see Byron and open your mind."

With all that Byron Bay has become, it's remarkable to think that less than 20 years before McGregor penned those words the same town was an industrial hub with a piggery, an abattoir, sand mining and a whaling station. It was quite literally a working-class village drowning in its own excrement.

As the Byron historical society noted, "the town was unkindly described as reeking from the stench … with their effluent colouring the sea and washing up on the shores".

The question is how did Byron transform itself from that, to the holiday destination and counter-cultural centre it is today.

A new book called Neverland charts the forces that created modern Byron Bay and it comes up with a few surprises.

"Byron Bay was never really a hippy town even though the media today still perpetuates the myth … surfers set the agenda for what Byron was to become."

More than that, the book argues that despite playing host to a healthy number of Australian surfers, its was Americans who came to the Cape, surfing and setting up businesses including clothing shops, cafes and surfboard factories.

Some had come to avoid the draft. Most were fleeing overdevelopment and endless crowds in their home country,

"The Americans were more entrepreneurial, but they had come to live a simpler life. They did not want to see what happened in California happen here," Shantz says.

Sharks attracted by the abattoir

The second question is: how did these Americans know Byron Bay even existed? Well, as the book explains, we can thank filmmaker Bruce Brown and champion surfer Phil Edwards for that.

In 1961 they travelled to Australia and Byron Bay to gather footage for the film Surfing Hollow Days. When the film was released in the United States a year later the world saw Edwards surfing The Pass and Wategos Beach.

As Edwards recalled later, "I remember seeing shadows under me one day and I left the water… up at the Lighthouse I saw traffic, meaning the men in grey suits [sharks]. I later found out there was a meat packing plant in town."

Edwards and Bruce Brown were about to get second shock. While they surfed Wategos another American was surfing The Pass just a few hundred metres away. That man was Bob Cooper. Back in the States he would also talk up the surf he'd found in Byron and later in the ‘60s he'd make the move to Australia for good, opening a string of successful surf shops.

The impact of the film wasn't immediate, but it was profound. Slowly Americans, seeking to find the perfect waves they had seen on screen, began arriving.

In 1964-65 three people who would help define the location found themselves in Byron. The first was Derek Beckner. Raised in Los Angeles he had come to surf.

In Neverland, Beckner recalls the moment he pulled up at the beach at Broken Head, just south of Byron: "It's still burnt in my brain. It's still one of the most perfect surfs I've seen in my life. Head high and peeling all the way from the point to the carpark."

Beckner was so taken by what he had seen he stayed, left for a short time, returning and finally becoming a resident and businessman in the bay.

'A sleepy beach town with lots of fish and chips'

George Greenough was the next key arrival. Greenough was a creative and eccentric Californian who made his living as a professional fisher and film camera operator, as he recalls in the book: "In California I fished lobsters. In Australia I made films."

Typically Greenough was underselling himself. Within two years of arriving he would help create a revolution in surfing. Between 1967-68, inspired by Greenough's design theories, Nat Young and Bob McTavish began reducing the size of surfboards, effectively creating the template for the kind of boards ridden today. Significantly the waves around Byron Bay proved themselves to be the ideal testing laboratory.

The third key figure was Denny Aaberg. A Californian surfer and musician, he had learned about Australia and its surfing possibilities from an Aussie pen friend. In 1965 he boarded a Pan Am jet and arrived in Sydney to be met by Nat Young and Bob McTavish. They quickly found themselves going north.

"My first impression was a sleepy beach town with lots of fish and chips, meat pies and pastry shops. And, of course, a pub and a beer garden," he says.

Aaberg finally made his way back to California but he would never forget the trip. When it came time for George Greenough to create a film soundtrack for his movie, The Innermost Limits of Pure Fun, he went back to California and asked Aaberg and his band Farm to create the music.

It was no ordinary film, containing sequences shot inside the tube of the wave. To inspire the band Greenough would project sequences on a sheet, while the band would jam and create music that flowed perfectly with the pictures.

The film was a major international success and along with the soundtrack, served only to further expand the mystique of Byron, its waves and landscape.

A beacon in the darkness

For all the mystique surrounding the Bay, in truth, it was not any easy place to live in the late 1960s. Jobs were scarce and the police were less than friendly.

The one beacon in the darkness was San Juan Surfboards. Opened in 1968 and run by Aussie Ken Adler, it became a place where people could find work and a focus for the local surfers.

Dick Hoole became the company's first employee and to this day remains thankful for the community he found at San Juan.

"This was a very special time in surfing because there was no real industry apart from us … more surfers were moving into Byron and things slowly started building."

Americans Rusty Miller, Garth Murphy and Mike Doyle soon came to town and began making their own surf wax. Nat Young moved up to the region and bought a farm.

The impact of San Juan is hard to overstate. American Bob Newland was just 17 when he found a job there. In time he would open the town's third surf shop Bare Nature, creating the first Australian surfboard leg-rope, made by his own company Surf Aids.

Despite the major changes taking place, the surfers didn't have things all their own way. The police were not impressed with this new group or the values they stood for.

According to Tricia Shantz they targeted the Americans.

"The Australians could be on the dole and the Americans couldn't. They were buying houses but there were no jobs around. So there was suspicion."

On location in Byron

If the ‘60s proved tough, the ‘70s brought a considerable change.

It's been said the pen is mightier than the sword, although in Byron's case it may be said the pen and the movie camera.

In 1970 Tracks magazine was created by Albe Falzon and David Elfick. Edited in Sydney, Tracks adopted Byron Bay as its second home. Each edition of the paper focused on the surfers, the surfing and the environmental issues created by mining and over development on the north coast.

Those same issues also became the focus of the film Morning of the Earth. With key scenes shot in and around Byron the film told the world that here potentially was heaven on earth. To put it in the words of director Albe Falzon, "move to the country and tread lightly on the earth".

When Falzon needed a big wave surfer for a key scene in the movie he chose American Rusty Miller. Miller had moved to Byron but now found himself at the centre of what would become a surf film classic.

A year on Miller would start The Byron Express newspaper. With its banner declaring "For a Higher State", the paper took up the issues that would continue to define the location: the environment, development and a healthy arts coverage.

As if to emphasise the connection between the surfers and Byron, at almost the same moment two women, Nyarie Abbey and Marilyn Young opened a shop. Called Neverland, it took its name from the Disneyland television series and suggested through its name that no-one ever wanted to grow up.

Sitting in Johnson Street filled with exotic Asian-made clothing and its exterior painted in exotic colours, author Tricia Shantz says it made a real impact on the town,

"It turned Byron from black and white to colour … The people at the shop looked very different to the townspeople and what they did, symbolised the changes that were happening."

It becomes clear reading Neverland and hearing the stories of the people who lived In Byron at the time, their love of surfing and their approach to life helped create the template for modern Byron Bay.

By the mid-‘70s it was possible to make a living there. Looking back, there is a lot of nostalgia about those times and the decade that went before.

There is also a view that this was Byron Bay's golden era.

As Neverland's author points out, though, it wasn't that simple. Life was much harder than it seemed and for much of the time the future of the town and region hung in the balance.

"If it wasn't for the American and Australian surfers, Byron Bay may still be an industrial town rather than a cultural destination it has become."

For that we have much to give thanks for.

- Review by Mark Bannerman for the ABC