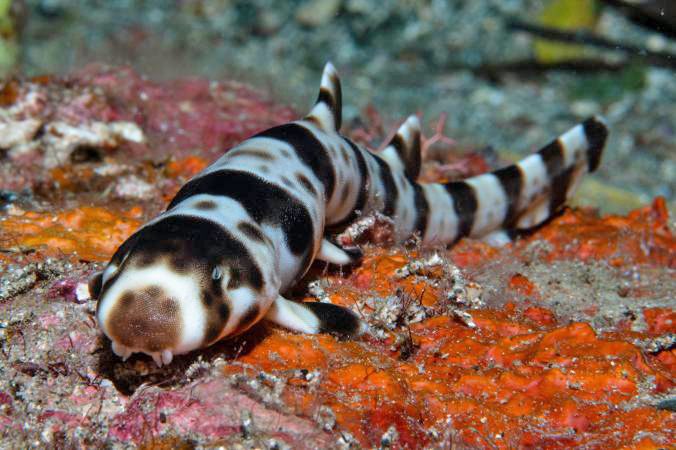 “During low tides, they became the top predator on the reef.” Four new species of this colourful yet overlooked group of reef dwellers have been found since 2008. Pic: Mark V Erdman / Conservation International

Meet the walking sharks – who go for a stroll outside the water!

From the “Bizarre Sea Creatures” file: Sharks have roamed the world’s oceans for hundreds of millions of years. In that time, many species have barely changed. But some strange sharks are still evolving—and have even learned to walk. Meet the walking sharks.

These three-foot-long creatures live near Australia, and, as their name implies, move their pectoral fins in the front and pelvic fins in the back to plod along the seafloor—or even atop coral reefs, outside the water, at low tide. Such mobility allows the sharks to wriggle between tide pools and different areas of the reef to prey upon crabs, shrimp, small fish—just about anything they can find.

“During low tides, they became the top predator on the reef,” says Christine Dudgeon, a researcher at the University of Queensland in Brisbane, Australia.

Now, a long-term study by an international group of collaborators has turned up four new species of walking sharks since 2008, bringing the total to nine walking shark species. In a paper published this week in the journal Marine and Freshwater Research, the researchers have also shown that these species all evolved in the last nine million years.

"That’s highly unusual," says Gavin Naylor, director of the Florida Program for Shark Research at the University of Florida, "Since most sharks evolve slowly. Sixgill sharks, for example, seem stuck back in time, we see animals from 180 million years ago with exactly the same teeth.

"This may be the one place in the world where speciation is still going on for sharks,” Naylor says. "Studying these animals will help researchers better understand the animals and why “some change, and others stay the same,” he adds.

About 400 million years ago, the ancestors of sharks and all other jawed vertebrates diverged. Since then, only about 1,200 species of sharks and rays have come into existence. The animals are, mostly, very slow to evolve, slow to reproduce, and long-lived, Naylor explains.

In other situations, this combination of traits would make an animal less adaptable and more vulnerable to extinction, since, in many cases, continued evolution is necessary to survive changing conditions.

You could say, for example, that “these things should be extinct,” Naylor says. “How do you exist for so long with a slow rate of evolution?”

Until 2008, scientists believed there were only five species of walking sharks, which are also known as epaulette sharks. Though most of these animals have similar anatomy, they have different coloration and marking patterns. The more detailed genetic analysis in the new study reveals that there are actually nine species, and exactly when they diverged from each other in the recent past.

Like most sharks, they face threats such as overfishing and harvesting for the aquarium trade. Some of the species, restricted to relatively small areas, are thus vulnerable, Dudgeon says.

Since several of them are only recently well described, and little studied, there is a lack of data; only three of the nine known species are included on the International Union for Conservation of Nature’s Red List of Threatened Species. Luckily, none of them are thought to be threatened or endangered yet, but in some cases, “we really just don’t know how they’re doing,” Dudgeon says.