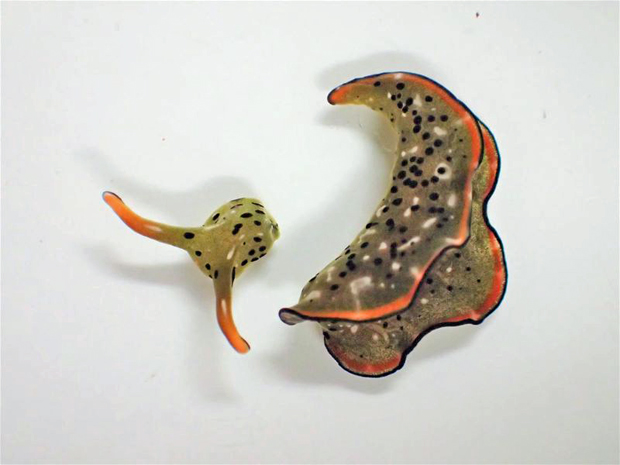 A sea slug’s head moves around three days after the invertebrate decapitated itself from its body. The body, still alive, reacts slightly when touched by the head. Frames from a video by Sayaka Mitoh. 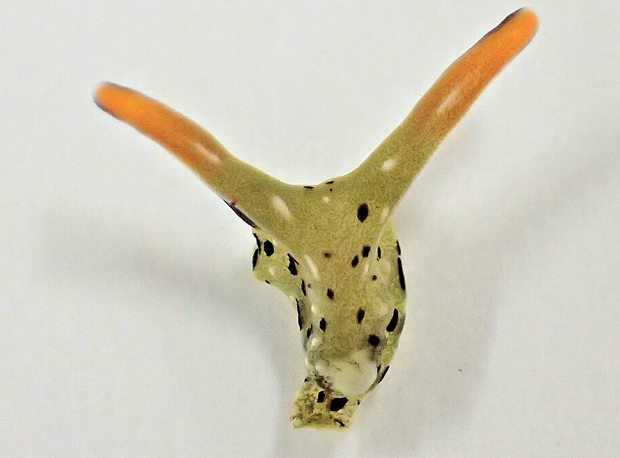 From the oceans of the Indo-West Pacific, the Sea of Japan, and the Caribbean, the elysia marginata are also known as the "solar powered sea slugs". 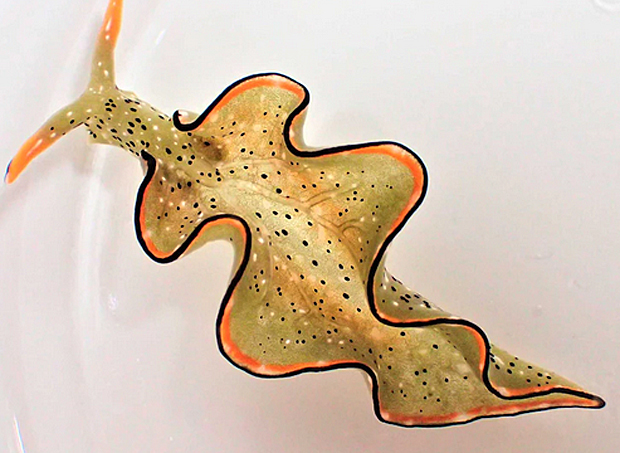 From the Strange Sea Stories file: Their severed heads get around just fine until they regenerate perfectly functioning, parasite-free new bodies, scientists say.

A few years ago, Sayaka Mitoh, a Ph.D. candidate at Nara Women’s University in Japan, was perusing her lab’s vast collection of sea slugs when she stumbled upon a gruesome sight. One of the lab’s captive-raised sea slugs, an Elysia marginata, had somehow been decapitated.

When Ms. Mitoh peered into its tank to get a better look, she noticed something even more shocking: The severed head of the creature was moving around the tank, munching algae as if there was nothing unusual about being a bodiless slug.

Ms. Mitoh also saw signs that the sea slug’s wound was self-inflicted: It was as if the sea slug had dissolved the tissue around its neck and ripped its own head off. Self-amputation, known as autotomy, isn’t uncommon in the animal kingdom. Having the ability to jettison a body part, such as a tail, helps many animals avoid predation. However, no animal had ever been observed ditching its entire body.

“I was really surprised and shocked to see the head moving,” said Ms. Mitoh, who studies the life history traits of sea slugs. She added that she expected the slug “would die quickly without a heart and other important organs.” But it not only continued to live, it also regenerated the entirety of its lost body within three weeks.

This prompted Ms. Mitoh and her colleagues to conduct a series of experiments aimed at figuring out how and why some sea slugs guillotine themselves. The results of their experiments, published Monday in Current Biology, provide evidence that Elysia marginata, and a closely related species, Elysia atroviridis, purposefully decapitate themselves in order to facilitate the growth of a new body. Although more research is needed, the researchers suspect these sea slugs ditch their bodies when they become infected with internal parasites.

Ms. Mitoh and her team monitored several groups of Elysia marginata and Elysia atroviridis over the course of the creatures’ lives. Not all the sea slugs they monitored decapitated themselves, but many did — one even did it twice. Bodies regenerated from the heads of both species, but the headless bodies stayed headless. However, those dumped bodies reacted to stimuli for as long as months, before decomposing.

The head wounds the sea slugs created during autotomy took only one day to heal. Organs such as the heart took an average of one week to regenerate. For most of the sea slugs, the regeneration process took less than three weeks to complete.

Dr. Gosliner, who has discovered over one-third of all sea slug species known to exist, suspects that the impressive regenerative capability of these sea slugs may relate to another impressive biological talent they possess.

Elysia marginata and Elysia atroviridis are often called “solar-powered sea slugs.” They are among a small number of slugs that can incorporate chloroplasts from the algae they eat into their bodies. This lets the slugs sustain themselves, at least partially, on the sugars the chloroplasts produce through photosynthesis.

Having this ability, which is known as kleptoplasty, could be what allows these sea slugs to survive long periods of time without their bodies.

In most animals and even some sea slugs, autotomy is thought to serve only as a means of avoiding predation. But the researchers found evidence that it can also be used to expel internal parasites. All of the Elysia atroviridis that separated their heads had internal parasites, according to the researchers. And by ditching their infested bodies, they successfully expelled them, regenerating parasite-free forms. Parasites were not found in any of the Elysia marginata.

Whatever purpose, these sea slugs’ regenerative abilities are “remarkable,” said Kenro Kusumi, a biologist at Arizona State University who studies regeneration in reptiles. According to Dr. Kusumi, the sea slugs in question have all the best traits found in animals capable of complex regeneration. For example, these sea slugs have a “breakage plane” along their necks that allows for a clean break. Many lizards, including geckos, have a similar breakage plane near the base of their tail.

“It’s so interesting to see so many features of regeneration in the animal kingdom brought together in one organism,” Dr. Kusumi said.

Much remains to be learned about drivers and biological mechanisms that allow Elysia marginata and Elysia atroviridis to sever their own heads and regenerate their bodies, but Ms. Mitoh and other scientists believe that improving our understanding of this strange phenomenon could one day lead to advances in regenerative medicine and other fields.