"According to MarketingProfs, 92% of 18 to 23-year-olds find it easier to read print over digital content and the response rate for marketing is 37%." 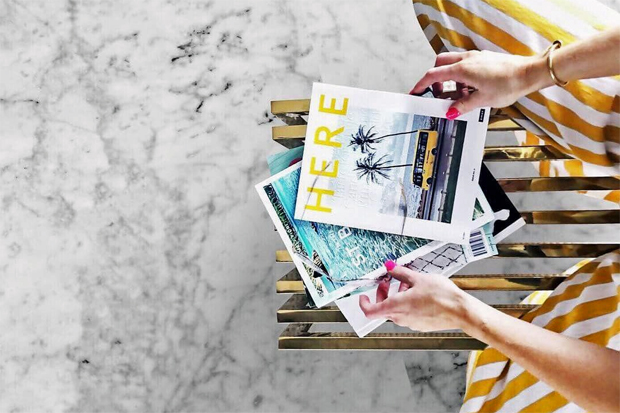 "There is a huge misconception that younger generations are so addicted to their phones that they are no longer are interested in reading physical products. The opposite is in fact supported by statistics."

Lessons from the world's biggest brands. The power of print. Part two from Reuters.

You’d be forgiven for thinking we cooked this up ourselves, but we’re not that savvy. Over to Reuters:

Last Christmas, Amazon announced that it would print a toy catalogue during the holiday season. For any other traditional retailer, this wouldn’t be a novelty. But the e-commerce giant has built its $100bn empire entirely on digital platforms. Why would the company turn to print when they have the world’s devices through which to advertise?

And they’re not alone. Facebook, Uber, Airbnb, Google, and Asos are just a few of the many brands that have turned to magazines to communicate with both employees and customers.

Are these brands feeling nostalgia for the 1990s? Possibly. But it’s more likely they understand that generation z and millennials see novelty in print, thus leveraging printed media as a special component in their media mix.

In a rush to digitize everything, sophisticated print magazines are a great way to stand out from the crowd.

From storytelling and branding, to monetization, what can publishers learn from some of the strongest brands turning back to print?

There is a huge misconception that younger generations are so addicted to their phones that they are no longer are interested in reading physical products. The opposite is in fact supported by statistics. According to MNI:

This means younger generations are reading almost as much as older ones.

FedEx Office found 90% of all consumers prefer to read printed materials vs. digital screens and, “Despite the familiarity with digital, nearly half of Millennial respondents (ages 18-34) reported having something professionally printed at least once a month.”

And, if you’re thinking brand magazines are just glorified catalogues, then get this: so successful are some ‘’free’’ brand magazines, they are now ‘‘on sale’’ standalone publications. Superdrug’s Dare magazine retails for US$3.87, Net-a-Porter’s Porter for $7.5 and ASOS magazine for $4.25.

Print is meant to support its digital channels. And it’s paying off.  Tess Macleod-Smith, VP of publishing and media at Net-a-Porter, said that, “85% of our top customers were inspired to shop after reading an issue of Porter, and those who become subscribers increased their spend by more than 125% and their frequency on the site by more than 25%.”

In his book, The Revenge of Analog: Real Things and Why They Matter, David Sax, a Canadian journalist explains that the millennial fascination for print comes from digital burnout: “Because the millennial generation came of age with broadband, internet, smartphones and social media, we assume that is all they want. But, in fact, when you look at who is driving the return of things like vinyl records, print books, paper books, new magazines, niche publications, it’s exactly that demographic of millennials, and those younger than them.”

He adds “That’s because they don’t view digital as special. Digital is like the air around them. To them, there’s a uniqueness when someone presents them something in an analog format. They’re more willing to see the value and not to see it as antiquated.”

THE FIGHT AGAINST DIGITAL AD FATIGUE

Put simply, ad fatigue is the condition that arises when consumers have grown tired of viewing the same ads.

In a world where consumers are fed up with too many online ads and retargeting campaigns, the payoff for print ads seem to be higher than digital ones.

According to MarketingProfs, 92% of 18- to 23-year-olds find it easier to read print over digital content and the response rate for direct-mail marketing is 37% higher than the email rate.

“In the age of fake news, trolls and bots, print can give that trust, authority and credibility,”  - Amy Hutchinson,  Marketing Director, BPIF

Many other brands that originated online are using print. Especially with the introduction of new data protection rules under GDPR, startups are thinking differently about how they communicate with their customers.

In this day and age, establishing a brand often comes with creating stand-alone content in the form of blog posts or images on Instagram. But a successful magazine can bring in advertising dollars and convert into new subscribers. It appeals to the customers you’re targeting.

Away, the direct-to-consumer luggage company, is now publishing its own magazine called Here. It retails for $10 and was slipped into every piece of luggage purchased when it launched.

“We had an amazing distribution platform because it’s going in the suitcase, so it means that anyone who’s buying it has a certain amount of income, is about to travel, and we knew exactly who the demographic it was going to because we were a direct-to-consumer company and these are our customers,” said Jen Rubio, president and chief brand officer at Away.

So what can we learn from these companies?

Most importantly, understanding your customers (and audience) wants and needs means that it’s not just about digital or print. Print provides an “offline” more authentic experience, while digital can convert to sales. If companies like Google and Amazon, whose businesses are digital based, are turning to print and direct mail, clearly it is because it shows an attractive ROI.

Next, we’ll be heading to emerging markets, where we’ll see how publishers are tackling the challenges that come with print advertising.

If you missed Part 1 of this series on the current state and future of print, head to Gen Z spends more time reading print then they do digital platforms