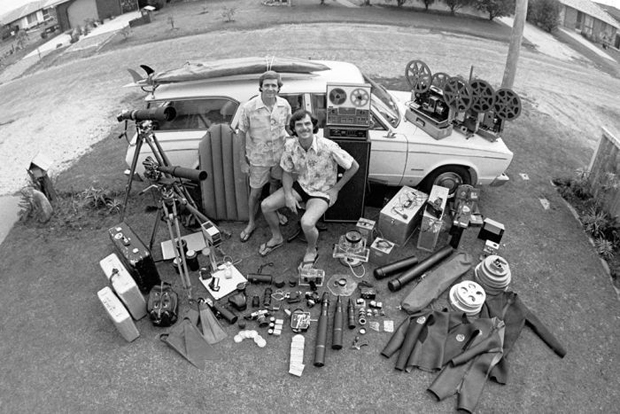 This is the latest news release: Over the past 45 years, legendary film maker Jack McCoy has travelled and produced films in the most exotic locations where he unearthed some of the best waves on the planet whilst working with the who’s who of surfing royalty…

McCoy's interactive ‘talk-story’ events have held audience’s captive around the world, with a mix of story-telling, never seen before film clips and photographs from his illustrious career in which he produced 25 multiple award winning feature films including Tubular Swells, Storm Riders, Green Iguana, the Occumentary, Blue Horizon and A Deeper Shade of Blue.

McCoy feels music is 50% of his films experience and will delve into how he was able to create soundtracks that have been etched into his fans minds forever. Artists such as Paul McCartney, Foo Fighters, Coldplay, INXS, Iggy Pop and Jack Johnson featured in the films and the untold stories (until now) behind the collaborations will go down in surfing folklore.

Throughout the tour McCoy will be joined by the likes of Mark Occhilupo, Tom Carroll, Dave Rastovich, Derek Hynd, Pam Burridge and Dion Agius to share their journey to the top of the surfing world. Following the talk story, the bands will take centre stage and some of Australia’s best up and coming talent who will rock the house down.

The audience will also be treated to the exclusive premiere of GLOBE’s new film starring Agius, Craig Anderson and Chippa Wilson.

To cap off the shows, McCoy is providing the opportunity to unearth the next generation of local musicians at each stop across the tour.

The first event of Jack McCoy’s Surf Talk and Jam East Coast Tour kicks off in Newcastle on Thursday and if the legendary McCoy, Mark Occhilupo and Dion Agius on stage sharing stories wasn’t enough… He’s gone and dropped a bomb with TWO world exclusive premieres at the show!

“We’ve been incredibly fortunate to be able to travel together and experience these incredibly beautiful land and seascapes over the past few years and we hope that this film serves as an inspiration to help bring focus back to the beauty of our natural world, and instil a sense of importance and urgency in the preservation of its future.” Says Agius.

The second world exclusive is a new video McCoy has been working on across the last couple of months. The details of the clip are being closely guarded however we can tell you McCoy has teamed up with Surfrider Foundation to assist raise awareness of the issues we’re facing Down Under.

"Whilst my filming days are behind me, I was lucky enough to work with Dave Fox, Beren Hall, Tom Jennings, Lachlan McKinnon and Jimmy Lees to utilise their amazing cinematography and bring the opportunity to life so thanks lads for making my dream come true.  I’ve showed a few friends and everyone has been pretty stoked to say the least.”

To cap off the night, the audience will be also treated to the tunes of local artist e444e who has been making waves with his amazing beats with many predicting the youngster to break onto the world stage in 2021.

*Make sure you head to the show early for the pre show entertainment out the front of the Newcastle Civic Theatre with music by Nick Saxon and food and drinks available from 5pm.

+ MORE SHOWS TO BE ANNOUNCED…