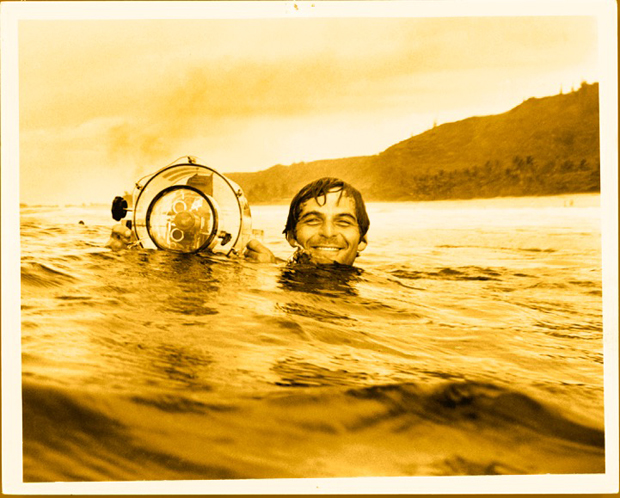 “With my first water housing and camera. My friend and partner Dick Hoole snapped this at Banzai Pipeline during the making of our first film Tubular Swells. It was not designed for Pipe and I was holding it at the first of a few near drownings."

Award winning filmmaker, Jack McCoy, invites you to enjoy an evening of stoke with his stories and clips as a director, photographer, cinematographer and producer at a series of one-night special events.

We are super stoked to announce that tickets are now on sale for ALL the Jack McCoy Talk Story East Coast Tour locations coming up this June at select locations.

In a two-hour audio visual ‘talk story’ Jack will take you behind the scenes on the making of his life’s work of 25 iconic films featuring generations of several surfing’s greats, some Bunyips, an Iguana and plenty of Tales from the Tube.  Jack will be joined on stage by a lineup of special guests.

The Jack McCoy Talk Story tour kicks off with the launch event at VIVID Ideas Sydney, June 14 at the Museum of Contemporary Art, overlooking Sydney

Harbour and the best view of the stunning VIVID Sydney lights show.

Due to demand, the VIVID Sydney program will feature two Talk Story shows. The first sees Jack joined on stage with special guests Kai Neville and Craig Anderson. Jack is so looking forward to this one to share some of Craig and Kai's clips and talk about what it takes to be a modern surf film maker as well as their feelings on the future of surf films.

The second show sees Jack joined on stage by his special guests Dave Rastovich and Wayne Lynch. This will be a cracker. The lads will be sharing some of the behind the scenes stories and clips from films they have worked together on, Blue Horizon and Storm Riders. Be quick, there are only 200 seats for each of these special VIVID Ideas shows at the MCA.

We are also pleased to announce other special guests across the tour include Mark Occhilupo and Joel Parkinson together with Jack.

Please tell your friends not to miss this one night only special event in select locations.  Hope to see you there and we’ll all share the stoke together.