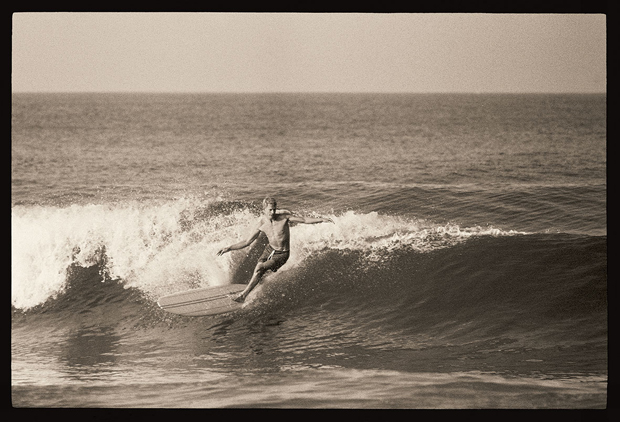 Viewed simply as a representation of an alternative culture of the 1970s, Witzig’s photographs were valid and intriguing even back then. But viewed with today’s eyes, they seem almost impossibly innocent and idealistic, like looking at a remote tribe of wild-haired boys just discovered by anthropologists for the National Geographic.

"These photographs were shot between the mid-1960s, and the end of the ’70s. I was working for surfing magazines during most of those years and took the sort of pictures that I wanted to run. That they’re now seen as a social document of a sub-cult of sorts has been an interesting development… and something that could never have been anticipated.

"This exhibition at Avalon is the first real tryout of a ‘what-will-fit-into-the-back-of-my-car’ show. Like lots of things, it’s driven by necessity. In this instance, the cost of moving a whole lot of large(ish) framed pictures around. I really love how big prints look on walls, but it’s not an exhibition model that’s sustainable… not for me anyway.

"I was invited to be part of an exhibition in Guéthary in France just over two years ago. The only way that could happen was to get prints done to fit standard frames. To my somewhat surprise, the show was a success. What I’ll have on the walls in Avalon in October is simply an extension of that. A lot more pictures."