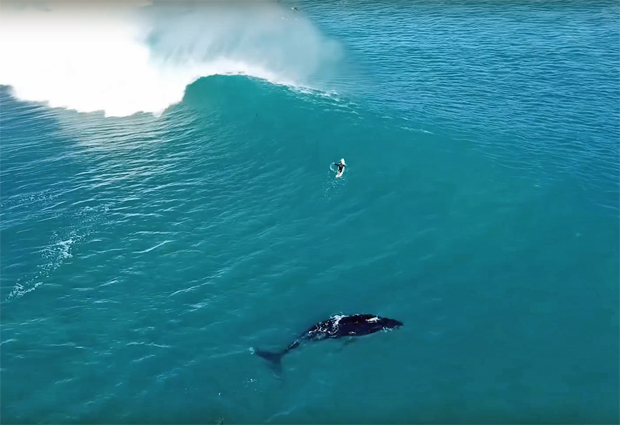 Humpback playing in the line-up with surfers and dolphins! Watch the vid.

From Alasdar Evans: A juvenile humpback whale graced the line up in Western Australia playing in the waves with dolphins and surfers.

On this day the dolphins were playing around in the waves for a while so I decided to throw my drone up and capture them from the sky. To my surprise a large shadow appeared, which turned out to be a humpback whale. At this spot along the coast we often see humpbacks breaching out to see but rarely in this close to the surfers and waves.

The whale and dolphins seemed to have a connection and were happy interacting with each other inside the break. This allowed a few surfers to experience some magical moments with the large mammal.

After about 4 minutes a large set came through breaking on the whale. This seemed to spook it, unfortunately causing the whale to dive off back into the depths of the Indian Ocean. This can be seen in the last clip of the video.

This was a memorable encounter for me, and one where I was just in the right place at the right time with my drone.