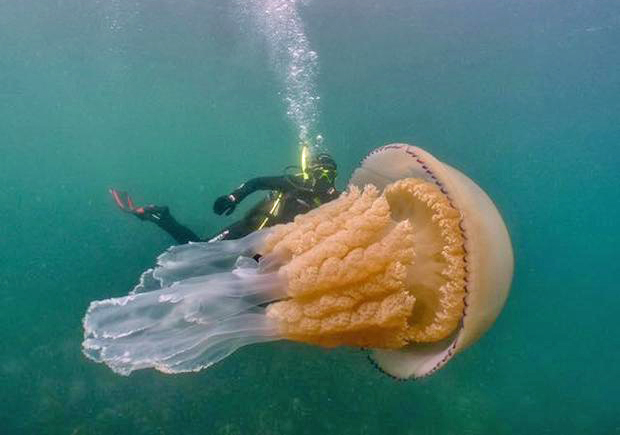 Lizzie Daly and her underwater cinematographer Dan Abbott swam around with this giant, but not harmful, barrel jellyfish for about an hour.

A wildlife expert and her photographer set off on an undersea adventure around the United Kingdom and what they witnessed was nothing short of amazing. BBC wildlife host and biologist Lizzie Daly swam next to a giant jellyfish that appeared to be as big as her body. A video of the jellyfish, taken by Daly's underwater cinematographer, Dan Abbott, has gone viral.

The cream-colored jellyfish was spotted off the coast of Cornwall, England. The size — and location — of the barrel jellyfish shocked many, but Daly says the creature isn't all that unusual.

Since the barrel jellyfish "wasn't something to worry about," and Daly was so fascinated, she spent about an hour swimming around with it.

She and Abbott were on a seven-day marine adventure to raise awareness about all the wildlife around the U.K. She calls it her "Wild Ocean Week." Daly hopes to also raise money for The Marine Conservation Society, which campaigns for ocean conservation.

Going on this trip was a "real life adventure," Daly said. "We saw everything from swimming with seals on the East, to breaching minke whales, lunge feeding whales, dolphins and then finishing with the giant barrel jellyfish." The pair filmed hours of footage, then edited shorter videos and posted them to Daly's Facebook page.

The video got that the most attention was the one showing the giant barrel jellyfish. "I couldn't think of a better way to finish the week in celebrating our incredible oceans," Daly wrote in the post.

She hopes the trip continues to encourage people to care about marine wildlife.