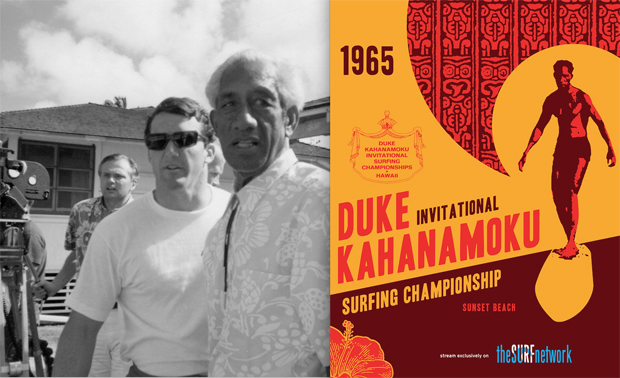 Lindberg, a pioneer in sports television coverage in the early 1960s, was the first to package and produce televised surf competition for the major national television networks beginning with the 1965 Duke Kahanamoku Invitational Championships, the first event held at Sunset Beach, Hawaii. And spanning the next two decades of surf contest evolution, right up to the 1985 Sunkist World Cup a major professional event, again held at Sunset Beach.

Yet more than simply covering surfing events for TV, Lindberg helped shape both the perception and direction of competitive surfing through his representation of the sport, which included innovative aerial and water photography, athlete interviews and cultural content—all aspects of conventional sports coverage viewers have since grown used too but were brand new back then. Especially when it came to surfing,

“Larry Lindberg presented surfing like no one had ever seen before,” says Randy Rarick, former pro competitor and World Surf League Founder, “Capturing the dynamics of it as a sport, not just a pastime. His network coverage made America go, wow, these surfers are sportsmen, and that really legitimized the whole thing.”

Beyond a fascinating video timeline of modern competitive surfing—none of these productions have been seen since their initial airing—the Lindberg collection, when considered in its entirety, takes on a much deeper significance.

“The quality of Larry’s surfing film imagery is visually captivating”, says Ira Opper, CEO at Opper Sports, Inc. “But even more amazing to watch are the extremely rare interviews with legendary surfers like Duke Kahanamoku, Miki Dora and Eddie Aikau. In focusing not just on the surfing but the surfers themselves, Lindberg has created an invaluable historical and cultural record that transcends more traditional surf movies. We’re truly honored to add the Lindberg collection to our surf film library, and to provide a venue for surfers the world over a chance to view this classic footage.”

Lindberg’s event series will be exclusively available for streaming HERE

TheSurfNetwork provides streaming access to the world’s largest surf movie library, offering over 1300 titles from the sport’s top filmmakers, legends, and new talent alike. Including archival classics from the 1950’s and 60’s, top hits from the 70’s, the very best of the VHS and DVD eras, right up to the latest titles available in the surf world.  TheSurfNetwork is available on Amazon Prime Video Channels, Roku, Apple TV, Amazon Fire TV, Android TV, Google TV, and mobile devices.

Since 1982 Opper Films has been capturing all aspects of the surfing world as a documentarian of the sport. The importance of film preservation has become increasingly apparent as the founding generations of surfing’s story tellers have taken their last wave. Through a combination of forty years of filming and library acquisitions the Opper Films surf archive has become the world's largest and most comprehensive historical surf film and video library and the defacto licensor of historical surf film footage. The library now spans 100 years and includes the people, the places, and the events that have shaped the surf world.