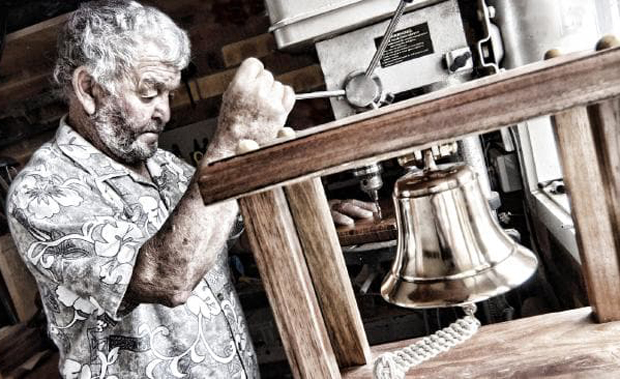 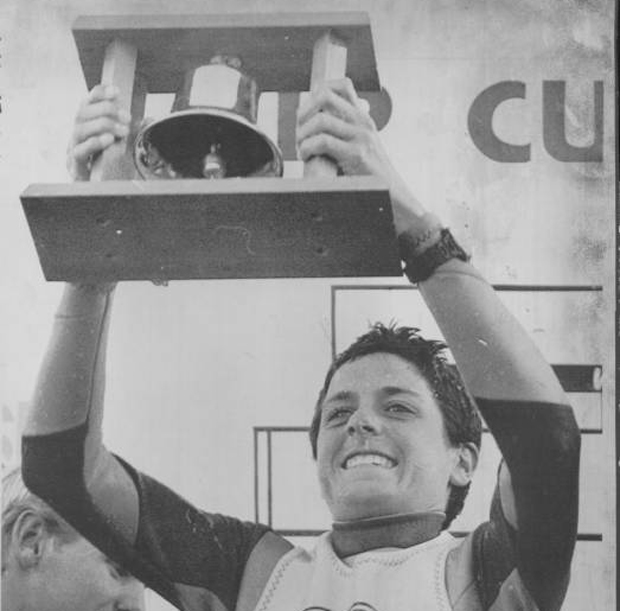 Nicky Wood giving it a ring.

Have you seen Nicky Wood’s Bells Trophy? Can it please come home?

Newcastle’s Nick Wood was just 16 when he cleaned up the best surfers in the world to win the Rip Curl Pro at Bells Beach in 1987. He’s still the youngest surfer to ever to win Bells – and it’s the longest running surf competition in the world.

The beautiful “Bell” trophies were made by Torquay surf legend Joe Sweeney, a tradition now carried on by his son Jeff, and they are a truly distinctive and rare item. And this particular one has Nicky’s name on it.

Nicky’s sister Rochelle posted on Facebook that he left it in storage with a mate back in the day, and one way or another it ended up going to auction at Normans Superior Auctions at Wickham. Apparently it has appeared on eBay once and been taken down, and has also been traced to an Australian guy living in Bali, but it certainly hasn’t come home yet.

Nicky is a father of four living on the Gold Coast these days, still surfing, and his family would be rapt to see him get The Bell back – paid for, no questions asked.

“I need everyone’s help. When my brother Nicky, was 16 he won the Bells Beach Surfing Pro, and when anyone wins Bells they receive a bell trophy. It’s a part of our families history, my mum used to ring it at dinner time as a joke and we would all know tea was ready lol.

“Because you can't enter Bells now unless you're over 18, no one will ever beat his record so the symbolicness of the trophy is huge, as well as it being a part of our family history. About 10 years ago when Nick was between houses he left his stuff all at a mates and unbeknown to Nick, that mate moved from his place at Byron Bay, and some of Nick’s stuff that didn't get lost, left or sold, got put into a storage shed in Newcastle. Apparently this guy then didn't pay his storage fees and everything inside the storage unit, including Nick’s Bells Beach trophy, was sold at auction.

“I was told some guy at Merewether had it but I couldn't find out his name. If anyone knows where it may be, or the guy’s name who actually did or does still have it, I would be overjoyed and would be happy to buy it back for double what was paid for it so I can return it to my brother.

"I know the auction house where it was sold was in Wickham because I went there and spoke to the owner who confirmed it had been sold but wouldn't tell me anything else, and to ring the police and at that point I didn't really want to involve them, and still haven’t, because I know they'll do nothing anyway.

IF YOU CAN HELP, PLEASE MESSAGE ROCHELLE THROUGH FACEBOOK