The Gold Coast made international news in 1952 when Paula Stafford model Ann Ferguson was warned off the beach by the Coast's first professional lifeguard John Moffatt. 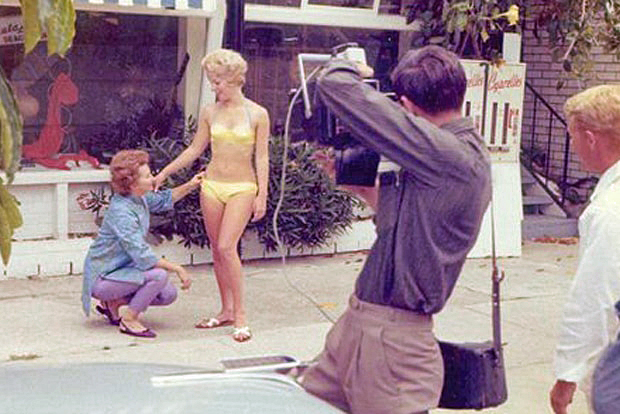 Paula's business grew rapidly in the 1960s, with a manufacturing staff of 65 and her brand in over 400 stores. Pic: Alan A Richards/City of Gold Coast Libraries

In the 1950s, Miss Teenage Victoria was awarded a holiday to Surfers Paradise. Pic: Alexander McRobbie/City of Gold Coast Libraries

Australia's Bikini Queen Paula Stafford turned 102 this week. Frenchman Louis Réard may have invented the bikini back in 1946, but it was Paula Stafford who popularised the controversial swimwear design and put the burgeoning holiday destination of the Gold Coast on the map.

In 1952, a woman wearing a Stafford bikini was ordered off a beach for being immodest, and the designer turned it into a PR stunt by sending five models to the beach in bikinis. And so it began.

"I never paid for publicity, the media came to me," Mrs Stafford said in her last ABC interview.

Copied below is the news piece we posted here back on 100th:

“We were living at Surfers Paradise and everybody wanted what I was wearing, I kept telling them I was too busy with four children. But I agreed to make one for someone and orders rushed in, it all went a bit bonkers,” she recalled.

COVID-19 precautions mean the designer, who personified the Gold Coast’s cheeky emerging identity in the 1950s, is celebrating a century in subdued style, but her hair and nails will be immaculate after an early appointment.

Granddaughter Anna Byers said Ms Stafford, credited with bringing the bikini to Australian beaches, would be guest of honour at her Mermaid Beach aged-care facility.

“We’re respectful of COVID-19 restrictions, so it will just be two close family members,” she said.

“The staff are really fond of Nanna and they’re planning a big cake for her and the other residents to share. She’s really happy and really well looked after here.

Our sun-soaked, flesh-splashed shores might have looked different if the fashion legend hadn’t unleashed a scandalous section of midriff on Surfers Paradise beach in 1952.

Sydney model Ann Ferguson sauntered on to the sand in the designer’s risque two-piece only to be ordered off by beach inspector John Moffat.

The resulting hullabaloo proved a publicity coup for Ms Stafford, catapulting the bikini and the Gold Coast on to the world stage.

The mother-of-four leveraged the attention into a lengthy fashion career, with a brand supplying more than 400 stores, a chain of boutiques carrying her name and a manufacturing staff of 65.

The designs that shaped a city’s colourful character have since been donated to Gold Coast Libraries, the Gold Coast Art Gallery and Gold Coast Historical Society.

Ms Stafford’s last public appearance was in 2013 when she was inducted into the Queensland Business Leaders Hall of Fame at a glamorous 93.

She revealed fate could have taken her in a different direction if it wasn’t for a former headmistress.

“I wanted to be an architect,” she told the Gold Coast Bulletin at the time.

“But my headmistress said, ‘That’s not feminine, we can’t have you climbing over buildings’, so I started designing dresses instead.”

That wasn’t about to stop our sassy swimwear legend showing off her architectural talents along the way.

“I designed a block of flats and a few houses,” she said.

“That headmistress probably wouldn’t have approved of the bikini either.”