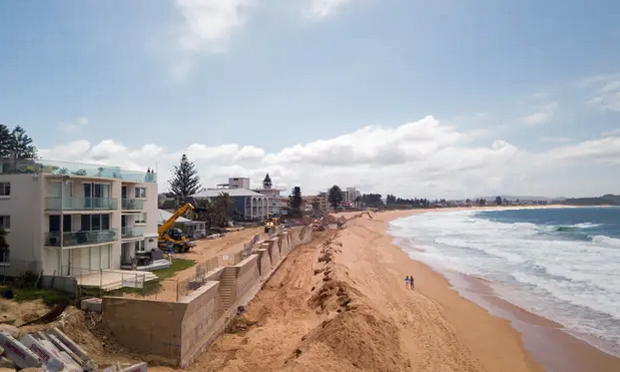 Not only is it arguably the ugliest edifice built on the coast, Collaroy’s seawall will destroy the beach. Photo: Lewis Isaacs/The Guardian

Northern Beaches council approved the seawall after amalgamating a number of development applications from beachfront property owners – the same DA as you might use to build a carport.’ Photo: Lewis Isaacs/The Guardian From Wendy Harmer: As Australia battles wild weather and coastal erosion, we should learn from our mistakes

The story of King Cnut the Great (Canute to you) is often misunderstood.

The early 11th-century ruler of the North Sea empire was not an arrogant fool who sought to stem the rising tide, proving man’s dominion over all.

Placing his throne on the bank of a river he thundered, “I order you not to rise on to my land, nor to wet the clothes or body of your Lord.”

As the water reached his shins, he declared to his courtiers: “Let all the world know that the power of kings is empty and worthless … heaven, earth and sea obey eternal laws.”

Or, as uttered by The Master in Doctor Who in 1976, “resistance is futile”.

In the face of climate change and sea-level rise, it’s a lesson that’s been forgotten by our politicians as they scramble to defend human-made assets from the ravages of waves turbo-charged by weather systems.

On Collaroy-Narrabeen beach, the Northern Beaches council is building a towering concrete vertical seawall – 7.5 metres high and piered 10 metres below the sand – to defend private property from the inevitable.

Not only is it arguably the ugliest edifice ever built on the Australian coast, but it’s not going to work. When walls like this are built on narrow beaches, they reflect and concentrate wave energy, accelerating erosion rather than ameliorating it.

This section of beach is now facing extinction.

As coastal engineer, Angus Gordon, told me: “It’s a 19th-century response to a 21st-century problem. A step back in time to the non-environmental brutalist engineering solutions of the 1900s.”

Gordon, who has been recognised by the United Nations as an international expert on coastal zone management, has been involved with projects worldwide. And, as a former manager of Pittwater council (now amalgamated with Northern Beaches), he knows the problem of beach erosion first-hand.

He was one of the architects of the 2016 NSW Coastal Management Act, which suffered a long, agonising birth into law, only to see it scuppered by a risk-averse state government intent on “cost-shifting”.

“The state just washed their hands of it. Too hard,” Gordon says. “The NSW government just wanted to get noisy beachfront property owners off its back.”

The application of the act was dumped on to local councils. Coastal management in NSW has now descended to a mish-mash of ad hoc solutions from local councils who lack the expertise, management and oversight of what’s being built on the coast as the tides roll in. Too often at the expense of beach amenity – those beautiful, adored stretches of sand and surf which belong to all of us, not just a wealthy few.

“We don’t even have a coherent coastal vulnerability map to refer to so we know which properties are at risk, let alone a way of administering what’s being done up and down the coast,” Gordon laments.

In the past (under the previous 1979 Act), a development like the Collaroy seawall would have come before an independent state government Coastal Panel. In fact, a seawall of almost the same vertical design now being built on Collaroy-Narrabeen beach was panned by that (now abolished) expert panel.

“What we need is an independent, non-political commissioner to oversee management of our coast. There must be an equitable balance of solutions between private landowners and the larger community of beach users,” Gordon says.

In 2019 the NSW government appointed an independent building commissioner after a series of catastrophic failures in that sector.

“We urgently need the same for the coast,” says Gordon.

“I’d back the growing call for an inquiry to the decisions which have led to the manifestation of the Collaroy-Narrabeen seawall.”

The urgent need for a “hands-off” approach is backed by University of Sydney coastal geomorphologist Prof Andrew Short, who has been studying Collaroy-Narrabeen beach since 1976.

“What we have now with this seawall is a total disaster,” Short says. “The only people who benefit are the private landowners.”

For its own part, the Northern Beaches council approved the building of the seawall after amalgamating a number of development applications from beachfront property owners – the same DA as you might use to build a carport.

The resulting DA only attracted mere handful of written submissions. Despite decades of community activism to protect the beach, so many were blindsided by the development. Where was the community forum? The input from surfers, beach lovers and residents in the wider community. We must have missed it.

The council is now pushing to extend the seawall further north along the beach.

Many locals are calling for a moratorium until the Northern Beaches council has taken independent, expert advice and declared its reasoning and intentions beyond a few private landowners.

When the preservation of a precious beach for future generations is at stake, we all should have a say.

The ancient king had it right. When it comes to protecting our beaches, old Cnuts often know best.