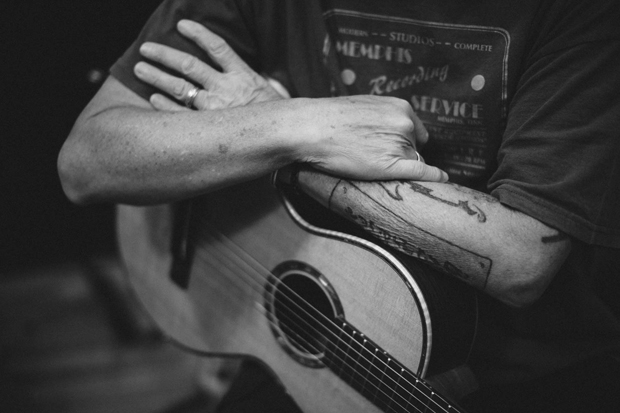 Ever noticed when you‘re out in the surf that a lot of time is spent just sitting? That’s why surfing is such a cerebral pursuit, because a fair amount of that “just sitting” time gets used for thinking, and thinking can lead to all kinds of interesting places.

In a session the other day, for example, during one of our all-too-frequent extended lulls between sets, I got to thinking about surfing and music, and guitar playing in particular. It was a good long quiet spell, and eventually it occurred to me that riding a shortboard is like playing an electric guitar, while surfing a longboard is the equivalent of playing an acoustic. I’m not going to go into the intricacies of this here  – you can figure it out for yourself when you’re next killing time, out in the line-up – but as far as analogies go, it’ll hold its own until something better comes along.

Anyway, back on dry land, imagine my surprise when the next package that tumbled across the PLB desk contained a little treasure called Following Tom Thumb, the new CD by Peter Howe and Tim Gaze. Two truly great pickers - both with impeccable Australian surf-music credentials - on an album full of gems, all played on acoustic guitar! The timing of its arrival was not a miracle, no, but still enough of a weird synchronicity thing that I’m reserving it as a subject to ponder during a future surf.

Now, Peter Howe you’ll remember as the architect of the song, “I’m Alive”, a standout among standouts on the legendary Morning of the Earth film soundtrack. And Tim Gaze is . . . well, Tim Gaze! A guitar slinging superhero with an extraordinary C.V. stretching back to his teens in Tamam Shud and his own glorious Morning of the Earth moments.

Howe and Gaze share some history, and obviously enjoy each other’s musical company. In more recent years, the two have made a couple of albums together (Pictures of the Coast and Secret Spot), but with Following Tom Thumb, it feels like they’ve shifted up a gear in both ambition and execution.

The album is themed around the historic voyage of the Tom Thumb, a tiny sailing dinghy commandeered by Matthew Flinders and George Bass in 1796 to explore the then-uncharted Illawarra coastline, south of the new colony at Sydney Harbour. Peter Howe is now a retired schoolteacher, and the conceptual framework of the album suggests that lately he’s been doing more than his fair share of cogitating while waiting for the next set at his local Far South Coast breaks. But if you’re wondering if Following Tom Thumb sounds like an academic think-piece, you’d be wrong. It’s a joy from start to finish.

The tunes are great, with a real melodic sensibility that serves the stories being told. And the playing is exceptional without being showy, the beautifully balanced picking of two guitarists who have plenty to say and nothing to prove. Howe and Gaze definitely know what they’re doing, but the magic of this recording owes much to the production skills of Kerryn Tolhurst. An Australian music legend in his own right, the former Dingoes mainstay has captured the immediacy and the presence of the moment to preserve the sense of live performance for the listener.

Following Tom Thumb is soaked in the past. Some of it is modern history - the penultimate track, “Still Alive”, revisits Howe’s “I’m Alive”, a Morning of the Earth flashback that’s cheeky and poignant at the same time. But the big picture here celebrates the wonder of Bass and Flinders’ eighteenth century sea adventure – a couple of young guys heading down an unknown coast to see what they might find. Sound familiar?

This is great music, inspired by a story that should give any surfer something to think about while waiting for that next wave.