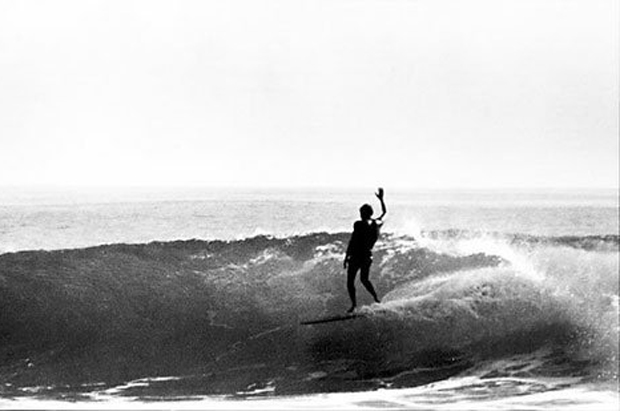 David Rensin, author of "All for a Few Perfect Waves: The Audacious Life and Legend of Rebel Surfer Miki Dora," poses at Surfrider Beach in Malibu in 2008. Dora died of pancreatic cancer in 2002. Pic: Reed Saxon, Associated Press A flashback to June 2008, and the release of “All For a Few Perfect Waves - The Audacious Life and Legend of Rebel Surfer Miki Dora”.  The book is still widely available if you Google it, and if you haven’t read it, it’s worth it – a candid portrait of the man the New York Times named "the most renegade spirit the sport has yet to produce".

Here’s how the book was reported by Deseret News at the time of  its release:

LOS ANGELES - He was an outlaw, a swindler and a con man, not to mention a shiftless vagrant who lived to avoid work.

All that would have made Miki Dora just another small-time crook with a penchant for traveling the world on forged credit cards and passports had he not also been the greatest surfer to ride a wave all the way into the beach at Malibu.

Without Dora, the surfing explosion that erupted in Southern California in the 1960s and swept around the world would still have occurred, says David Rensin, author of "All for a Few Perfect Waves: The Audacious Life and Legend of Rebel Surfer Miki Dora."

After all, Frederic Koehner's 1957 best seller "Gidget", a thinly fictionalized account of Koehner's surfer-daughter Kathy and her crazy, wave-riding friends, had already ensured the pastime's place in the pantheon of pop culture.

But surfing might not have arrived on the world stage with quite the same swagger if Dora hadn't accompanied it, bringing with him the image of the surfer as the solitary anti-hero.

"If you hadn't had Jack Kerouac and Neal Cassady and Allen Ginsberg, what would we know about the beats?" Rensin asks as he ponders Dora's influence on surfing from the outdoor verandah of a Los Angeles restaurant several miles east of the shore Dora once ruled.

"Kerouac. He wrote books. All Miki did was surf," the 58-year-old author continues between sips of iced tea on a warm, sunny spring morning. "But between his rebel heart, between his localism, between his style, between his being in the right place at the right time, his ethos pervades surf culture to this day."

Six years after his death at age 67 from pancreatic cancer, Dora still has his name scrawled on seawalls along California's coast, and his reputation among surfers remains known around the world. In New Zealand, the Mount Surf Museum proudly houses many of his artifacts, including his treasured Duke Kahanamoku Big Wave Invitational trophy that Dora won in Hawaii in 1967 - and lost Down Under a few years later when some of the creditors he'd fleeced seized his possessions and auctioned them.

To get to know Dora, Rensin interviewed more than 300 people, constructing the book as an "oral history" in which both friends and enemies weigh in with their remembrances of the man alternately known as "Da Cat" for his uncanny moves on a surfboard and as the "Black Knight" for his sometimes anti-social behavior both on and off the longboard.

"He didn't like anybody on his wave," chuckles the author, recounting how Dora was credited by many with inventing surfing's "localism" by pushing outsiders and lesser-skilled riders off their boards or, if they really annoyed him, aiming his board at their heads.

At the same time, he could be gracious when the mood struck. A rare YouTube clip of Dora, who hated being photographed, shows him deftly maneuvering around dozens of clumsy riders at Malibu on a day when the waves more closely resembled an urban highway at rush hour.

"During the course of the last 50 years, I've been asked two questions over and over," says Greg Noll, himself a surfing legend for his skill at riding giant waves. "One is, 'What was it like to ride big waves?' The other is, 'What was Miki Dora really like?"'

Even Noll, a friend of Dora's since childhood, says the latter is a question almost impossible to answer. He does offer this much: "He was probably the purest surfer who ever waxed a board. ... He had a style that was completely his own. He was remarkable."

And all he really seemed to want to do was surf. Except for earning a few dollars doing the stunts for James Darren, Frankie Avalon and others in the "Gidget" and "Beach Party" films of the '60s and 1970s, there is no evidence that Dora ever worked a day in his life.

Early on, he got by hustling fans and stealing from friends and the occasional celebrity he'd encounter on the Hollywood party circuit. By the time he was arrested in central California in the early '70s, he had graduated to credit-card fraud and passing bad checks.

He fled to New Zealand and then left that country when authorities closed in on him, "as somebody said, with the steam rising on his soup," Rensin recalls with a laugh.

The next stop was Australia, then South Africa, Spain and various points in between, locations all selected as much for their surfing conditions as for Dora's efforts to stay one step ahead of the law.

He was caught in France when he made the mistake of rigging a pay phone to make free overseas calls while French authorities, looking for members of a Basque separatist group, were monitoring it.

Dora hadn't been out of jail long when Rensin crossed paths with him in 1983 and, to the writer's amazement, got him to sit down for a rare mainstream magazine interview. Although Dora denounced the story, he suggested that the two collaborate on a movie of his life. And then he never spoke to Rensin again.

The writer, meanwhile, went on to author 11 books, most notably "The Mailroom," his 2004 best seller about how Michael Ovitz, David Geffin Geffen and numerous other Hollywood heavyweights started their careers. But over the years, he could never get the image of one crazy surfer out of his head. Dora's life story, he finally concluded, had to be told. It transcended surfing, Rensin says, and "was a slice of Americana."

Maybe, Noll muses, it was even more.

"There's something about surfing, I don't know what it is," he says. "People always ask, 'What is it that makes people want to give up their friends, their family, their jobs and just go surfing?' Those people always categorize surfing as a sport. But it's not. It's a lifestyle. And Miki took it about as far and high as you can."