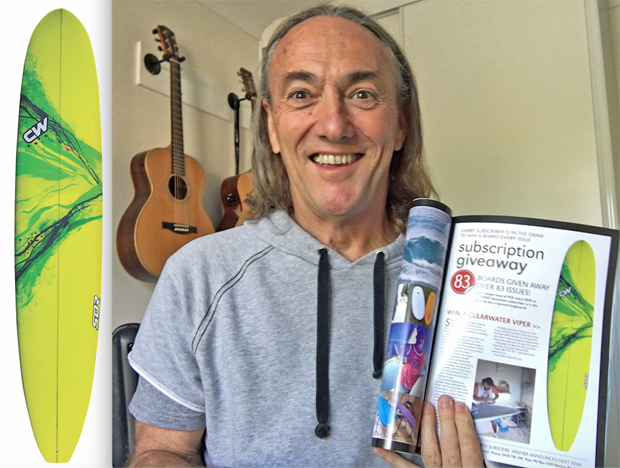 That’s the dial of a bloke who just got a phone call saying he’d won a new board. 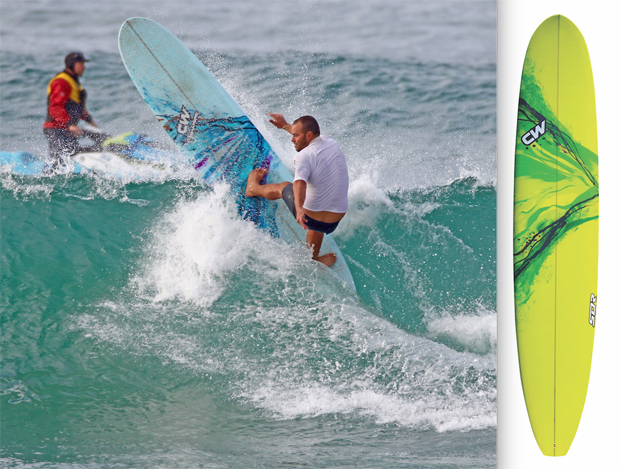 David scores the Clearwater Viper – our 83rd subscriber board winner!

David Sands from Shelly Beach was just a wee bit excited to win the tuned Clearwater Viper tri-fin in our 83rdmagazine subscriber giveaway.

“I mostly ride logs these days, I’ve got a 9’6” and 10’2” . . . I had a 9’4” performance board but my son borrowed it two years ago and I haven’t seen it since! But I do love swapping between the two big boards, and both have big hatchet fins so if nothing else it’s forced me to learn how to get around on a mal, I can almost turn them haha! I’ve cut back on work and been surfing a lot lately and I’ve never enjoyed life so much. Besides the points we have a lot of beachbreaks around here on the Central Coast . . . so excited, this board is the balance in the quiver for me, the yin and yang!

“I’ve seen a few of this model among the crew around here, and I watched Paul Scholten on his at the Crescent comp last year. I’ve got to thank Steve Del Rosso, and I’m a believer that all of us should be riding boards made locally. Now I’ve just got to keep the young bloke away from it . . . he’ll take it to Newcastle!”

Clearwater’s Steve Del Rosso has been shaping and building surfboards since 1986, and he learnt to do it all old school. These days he’s got a solid little crew of craftsmen working with him at his Currumbin factory, glassing through to finishing, and the entire process is done in-house - building everything from rocket shortboards through to traditional logs.

Steve developed the Viper with his teamriders, and says, “This model has an accelerated tail rocker and a flatter nose rocker than most performance longboards, and it’s all about drive and manoeuvrability off the tail while allowing comp level noseriding.”

And she’s all yours David!

AND NOW FOR BOARD NUMBER 84!