A rainbow frames the Kalaupapa peninsula on Molokai, home of the Kalaupapa settlement that once housed Hansen’s disease patients. Pics: Jonathan Kingston 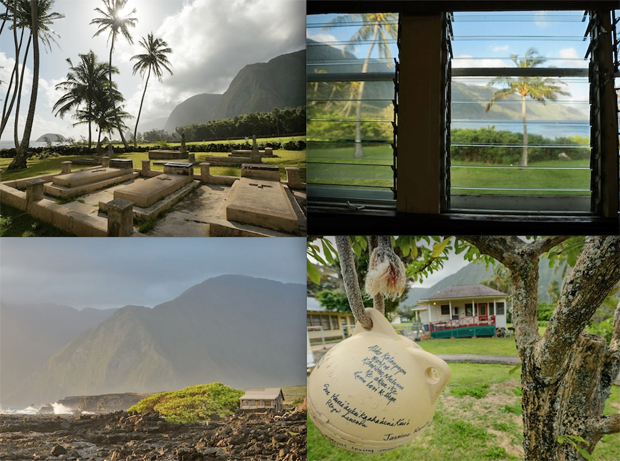 The former homes of those afflicted with Hansen’s disease still stand. A fishing buoy hanging from a tree is inscribed with a prayer in the Hawaiian language. 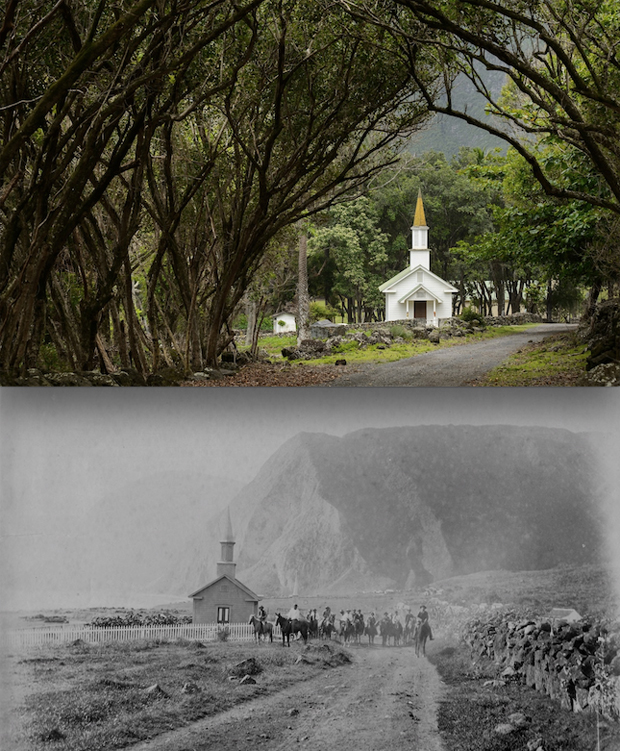 Siloama Church today and in 1885. “The Church of the Healing Spring” was built in 1871 in Kalawao, one of two original settlements on the peninsula where Hansen’s disease patients were forcibly relocated starting in 1866. 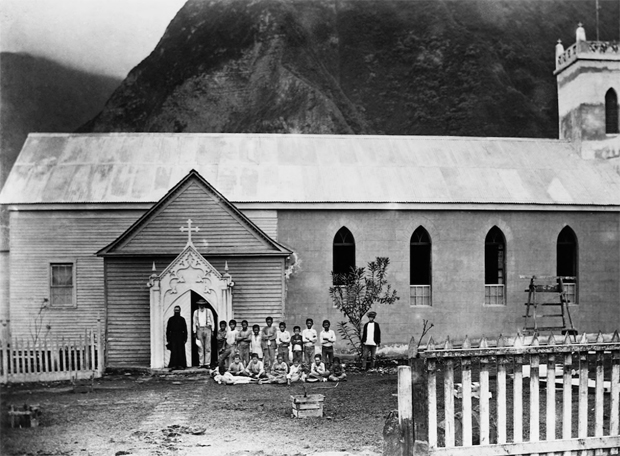 St. Philomena Church, built in 1872 near Siloama Church, and associated with Father Damien (standing with patients), who cared for those afflicted with Hansen’s disease from 1873 to his death from the illness in 1889. This church is also still standing. 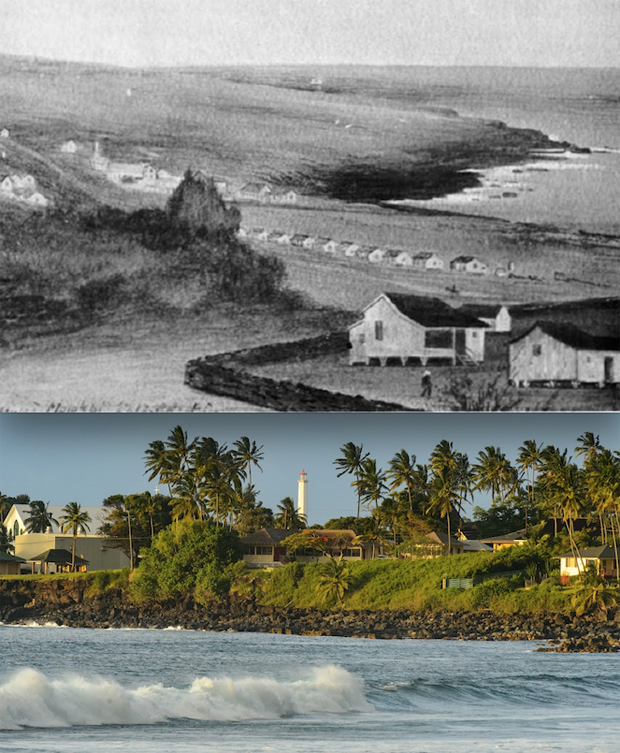 The Kalaupapa Settlement then and now. One of two sites on Molokai where Hansen’s patients lived, Kalaupapa town is reachable from a strenuous footpath that ascends nearly 2,000 feet and 26 switchbacks.

Compass: Molokai Island. This national park in paradise was once an isolated quarantine zone

In Hawaii, a unique historical site sheds light on a story of prejudice, resilience – and aloha.

From Nat Geo: While many U.S. national parks have temporarily closed to help mitigate the spread of COVID-19, one remote national park in Hawaii must remain operational - for its residents, not for visitors.

Kalaupapa National Historical Park sits on a secluded peninsula, separated from the rest of the island of Molokai by a two-thousand-foot-tall wall of cliffs. Unlike other historical parks that curate stories from the past, interpretive park ranger Miki`ala Pescaia says that Kalaupapa is still writing its own history.

Kalaupapa is home to a population of fewer than a dozen former Hansen’s disease patients, the only remaining residents among the thousands of afflicted who were exiled here under the quarantine law, the “Act to Prevent the Spread of Leprosy.”

There are no roads connecting the peninsula to “top side” Molokai; access is by aircraft, boat, or mule (the last option is currently unavailable due to trail damage caused by a landslide).

There’s no fire department, no police, no hospitals, and no ventilators in Kalaupapa. Anyone in need of medical care is sent by air to a neighboring island. If there’s an emergency at night, Pescaia says, “you’re in the hands of your neighbors until morning. The air ambulance only flies when the sun is up.”

Hansen’s disease (also known as leprosy) is a chronic infectious disease caused by a bacteria, believed to be spread by prolonged close contact with an untreated infected person, through vapor droplets from the nose and mouth. It affects the nerves, skin, eyes, and upper respiratory tract. If left untreated, it can cause permanent damage and disfigurement.

Although it can now be treated with multidrug therapy, there was no cure for Hansen’s disease when it first arrived on Hawaiian shores, and the stigma associated with it can be traced all the way back to 2000 B.C. About 95 percent of the world’s population is immune to the bacteria that causes Hansen’s disease. But viruses, bacteria, and diseases brought in by outsiders have had devastating impacts on native Hawaiians who were immunologically isolated for several hundred years prior to European contact.

From 1865 to 1969, some 8,000 Hawaiian residents suspected of having Hansen’s disease were forcibly sent to the Kalaupapa peninsula to fend for themselves; nearly all were native Hawaiian. Many were torn from their families at a young age - the youngest patient at Kalaupapa was just four years old.

For many years there were no proper medical facilities or healthcare professionals on-site. The patients themselves were left to care for one another, and it was the kama'aina - the native Hawaiians who were living on the peninsula for hundreds of years before patients arrived - that stepped up to help.

“When the government continued to send more and more people and failed to keep up with provisions, that's when the hardships started,” says Valerie Monson, executive director of Ka ‘Ohana O Kalaupapa, a nonprofit established at the request of Kalaupapa residents to advocate for the community, establish a memorial, and connect descendants with their Kalaupapa ancestors.

A cure for Hansen’s disease arrived in Hawaii in 1946, yet it wasn’t until 1969 that the isolation law was finally lifted—more than 100 years after it was enacted. Former patients were legally permitted to leave once cured (some as early as 1909). But not everyone did. “Most of them had lived there for so much of their life,” Monson says. “By this time, Kalaupapa was their home.” And for some former patients who had lost contact with family outside of Kalaupapa, there was nowhere for them to go.

As the former patient population living in Kalaupapa began to dwindle in the years that followed, residents began to wonder what would become of Kalaupapa when they were all gone. The former patients “evaluated a number of organizations,” Pescaia says, “and chose the Park Service to come in and curate the story.”

In 1980, the National Park Service (NPS) declared Kalaupapa a National Historical Park. The NPS leased lands from the Department of Hawaiian Homelands and established an agreement with the Department of Land and Natural Resources.

The Department of Health remained involved and continues to this day to act as administrator over both state agencies. Taking on the management of the park is not only about stewardship of the land; it’s also a commitment to protect the community and preserve its historical and cultural resources.

As a park ranger, Pescaia says her job involves interpreting the stories former patients entrust to her and facilitating a deeper understanding of the culture, history, lessons, and natural resources of Kalaupapa for visitors.

Her work doesn’t end there. “One of our [NPS] essential functions is to provide for the safety and comfort of the remaining patient community,” Pescaia says. “So even during this shutdown [when many other parks and businesses are closed due to COVID-19], we know we have a duty to provide essential services for our patient community and those that live here, given our isolated location.”

Breaking through the stigma

Pescaia, the NPS, and the community must also consider the mental health of the former patients here who were deeply traumatized by the extensive physical distancing, discrimination, and stigma associated with the disease.

“In the past, you couldn’t touch patients,” Pescaia explains. “We had a fumigation building to spray down their mail, their clothes … Everything was segregated—separate bathrooms for patients and na kokua (the helpers). There were fences that ran down the middle of the table in the longhouse. You could talk to patients through the fence, but not touch.”

Even after they were cured and the law was repealed, some former patients faced continued discrimination. Some people still treated them differently, afraid to touch or be near them, uncertain how to safely engage with them. After enduring decades of isolation, physical touch became extremely critical to their mental healing. Pescaia says daily hugs and greetings are a source of comfort. “When they reach out for our hand, we don’t hesitate at all. It’s an act of trust and aloha.”

Now that physical touch could put former patients at risk of contracting COVID-19, Pescaia and the community have to refrain from their usual handshakes and hugs. The restrictions on physical interactions are critical to curbing the spread of COVID-19, but the new protocols have unleashed painful memories. “The former patients have been sharing stories of what it was like, the discrimination that they’ve gone through in their lifetimes,” Pescaia says. “It’s been so powerful being in their space and hearing them.”

Pescaia and the folks at NPS take the stories to heart. Safety is the priority, and at Kalaupapa, that includes psychological wellbeing. “With every policy shift we have to weigh out what is keeping the former patients physically and emotionally safe,” she says.

After years of harsh conditions, strict rules, and extreme isolation before the quarantine law was repealed, the former patients are not keen on returning to a life of restrictions. So NPS is doing everything it can to honor the former patients’ experiences while also protecting them.

Pescaia believes that people around the world can help to honor and protect Kalaupapa residents by mirroring their strength of spirit in the face of adversity and showing aloha in everyday actions. Her suggestions: offer assistance to someone in need; extend compassion rather than judgment, especially to those who contract COVID-19 or other illnesses; be mindful of how your decisions impact others.

“Your behaviors may put other people at risk,” she says. “We can all wait. We can spare a few weeks in exchange [for the health and safety of all]. This is aloha—looking after everyone and figuring it out together.”