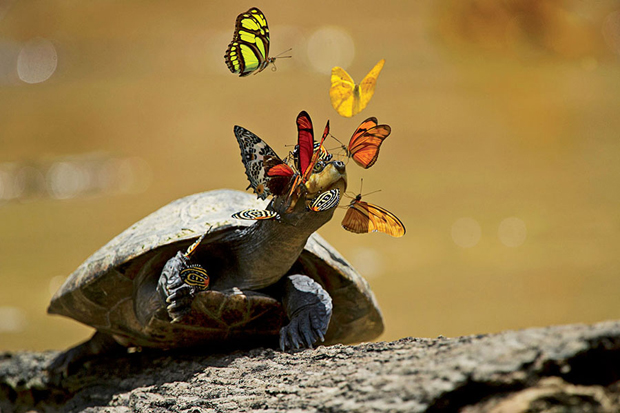 One gets their eyes cleaned, the other get a dwink :) 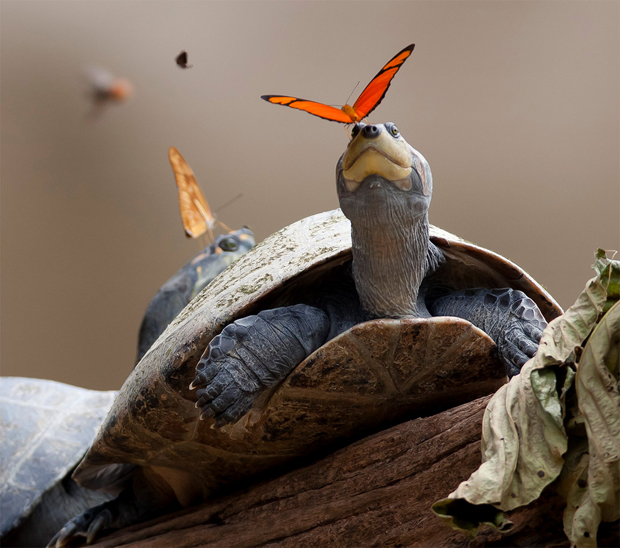 Sure everyone has a soft spot for turtles . . . and butterflies

This has nothing at all to do with surfing but have you ever heard of anything more poetic? It happens in the Amazon basin, and no they’re not crying because of the trees falling in the rainforest, it’s just their tears are particularly salty and the butterflies love them.

Here’s how it was reported by NBC:

The sight of butterflies flocking onto the heads of yellow-spotted river turtles in the western Amazon rain forest is not uncommon, at least if one is able to sneak up on the skittish reptiles. But the reason why butterflies congregate onto the turtles may be stranger than you think: to drink their tears.

The butterflies are likely attracted to the turtles' tears because the liquid drops contain salt, specifically sodium, an important mineral that is scant in the western Amazon, said Phil Torres, a scientist who does much of his research at the Tambopata Research Center in Peru and is associated with Rice University.

Unlike butterflies, turtles get plenty of sodium through their largely carnivorous diet. Meat contains significant levels of the salt, Torres told LiveScience. But herbivores sometimes struggle to get enough sodium and other minerals, he added. "They end up needing this extra mineral source," he said.

Turtle tears are not the only source of such salts for butterflies; the insects also readily get the salt from animal urine, muddy river banks, puddles, sweaty clothes and sweating people, said Geoff Gallice, a graduate student of entomology at the Florida Museum of Natural History, who has witnessed butterflies flocking to turtle tears in the western Amazon rain forest.

This region is lower in sodium than many places on Earth, because it is more than 1,000 miles (1,600 kilometers) from the Atlantic Ocean, a prime source of salt, and is cut off from windblown mineral particles to the west by the Andes Mountains. Dust and minerals make their way into the Amazon from the east, sometimes all the way from north Africa. But much of this material is removed from the air by rain before it reaches the western Amazon, Torres said.

In fact, the turtles — blinded and drowning in butterfly kisses — are sometimes easier to photograph than unadorned animals, which may be able to spot an approaching photographer more easily. The photos were taken by Jeff Cremer, marketing director for Rainforest Expeditions, an ecotourism company that hosts guests in the Peruvian Amazon and organizes trips to the jungle.

Gallice said, based on his observations, that the feeding likely does little direct harm to the turtles. "The turtles have enough tears to feed the butterflies simply because the butterflies are taking so little," he said. "They simply uptake salts through a process similar to absorption by placing the proboscis on the salt-laden (tears) and passively 'feed.'"

The lack of salt in the region has driven other animals to exhibit unusual behaviors. For example, macaws visit clay licks to, well, lick clay, which contains sodium and other minerals, Torres said. Certain types of monkeys also eat dirt for the same reason, he added.

The butterflies also may be seeking other minerals in the turtles' tears, and perhaps even amino acids, the building blocks of proteins, Torres said. He plans to study this in the near future to find out what's going on.

"Potentially, they could be getting other resources out of those eyeballs that we don't even know about," Torres said. "Basically, we have to go start swabbing turtle eyeballs and see what we get."

The tear-drinking phenomenon doesn't appear to take place often outside this region. "I have been studying turtles in the wild — from the northern U.S., Mexico and Amazonas — for over 50 years and have never seen butterflies drinking tears of turtles," said Richard C. Vogt, a researcher at the National Institute of Amazonian Research in Manaus, Brazil.

Juarez Pezzuti, a turtle specialist at Brazil's Federal University of Pará, hasn't seen it either. However, neither he nor Vogt doubt that it happened, and they said it makes sense, as some turtles eliminate excess salt through their tears.